The Gram Stain: Its Persistence and Its Quirks

What is more emblematic of our science than the Gram stain? Since its invention 130 years ago, it has been in frequent and continuous use. It conveniently places most bacteria into one of two groups, the Gram-positives or the Gram-negatives. Gram staining is cheap, effective, quick, and relatively easy to interpret. Its most useful application is in the clinical setting. When examining a smear of, say, pus from an abscess, this stain often allows to include for consideration roughly half the clinically relevant bacterial species while excluding the others. Or consider a patient with meningitis. Here, speed is of the essence because treatment must be initiated right away. A Gram stain of the spinal fluid may reveal within minutes the presence of Gram-positive cocci, (probably pneumococci), Gram-negative cocci (almost certainly meningococci), or Gram-negative slender rods (most likely Haemophilus influenzae). This can make a critical difference in the choice of antibiotics that have to be administered in great haste. However, when it comes to characterizing the bacteria in an environment, its usefulness diminishes, in part because it is not always in step with taxonomy, which I’ll discuss below. And there yet is another side to this story. Quite a few bacterial species that stain positive early in the growth of a culture become Gram-negative later on. Does this detract from the value of Gram’s method? It may, but not in the hands of a person experienced in its use.

Hans Christian Joachim Gram. His paper on the Gram stain published in Fortschritte der Medicin, 2(6), 185-189 (1884), was entitled: “Ueber die isolirte Färbung der Schizomyceten in Schnitt- und Trockenpräparaten” (roughly: “On the differential staining of Schizomycetes in dry preparations and sections.” Schizomycetes, or dividing fungi, was a common term for bacteria in the early days of microbiology. Source.

A Bit of History: How to Stain Bacteria in Tissue Slices

In the early days of Bacteriology, staining was a big deal (culturing was just coming into its own). Staining procedures were aided by the availability of strong dyes, the synthetic aniline dyes, that were first made around the middle of the 19th century. Staining bacteria on a smear with these dyes worked fine, but visualizing them in tissue slices—which is one way to fulfill Koch’s first postulate—was another matter. Here, all sorts of cellular and extracellular material also take up the dyes used, which makes it nearly impossible to distinguish the small bacteria. The problem, it was realized, could be solved by using ways to selectively stain the bacteria. One way to do it could be to decolorize the other stuff. The first successful technique based on this principle used acid to differentially remove the stain. Fortuitously, this method was developed to distinguish tubercle bacilli, which uniquely retain a dye after acid treatment (hence they are “acid fast”). Other bacteria are bleached by acid along with what’s in the rest of the sample.

Finding ways to differentially stain other bacteria in tissues required a lot of work and all sorts of trials. One strategy that clearly came to mind was to use mordants, chemicals that help “set” a dye. This was standard practice in the textile industry, the principal user of these synthetic dyes and the developer of mordants for intensifying the colors. Many possible mordants were used to dye bacteria as well, e.g., phenol in the acid-fast staining procedure. These methods were known to the Danish physician H. C. Gram (1853–1938) who wanted to see the bacteria in slices of lung tissue from patients who had died of pneumonia. He did not have in mind distinguishing one kind of bacterium from another, the main purpose today for the procedure that bears his name.

Gram tried as a mordant a common iodine solution, Lugol’s, which he almost surely had within arm’s reach. When using a violet stain, he soon found out that adding the iodine solution precipitated the dye. In other words, it made a mess. Hoping to clean up the preparation, Gram tried flooding it with ethanol. He found that, if he did it carefully, the tissue components were decolorized whereas some bacteria retained the violet dye and others did not. The colorless ones were now hard to see, but adding a “counterstain” of a different color (red) made them readily visible. So, Gram-positives become “purple,” Gram-negatives “red.” Being a modest man, Gram stated: I have therefore published the method, although I am aware that as yet it is very defective and imperfect; but it is hoped that also in the hands of other investigators it will turn out to be useful. How true is the last statement! It bears stressing that Gram’s discovery was anything but accidental, despite what has been stated in some textbooks. 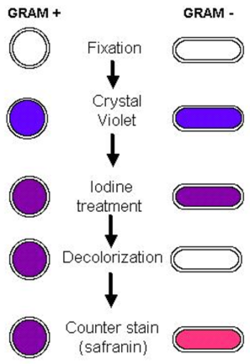 The steps in Gram staining. If you’re going to do it, consider wearing gloves or else you may find out that your fingers are visibly Gram-positive. Source.

How Does It Work?

The crux of the Gram stain is the exposure to alcohol (or to the other organic solvents that are often used) during decolorization. For the Gram-negatives, most of which possess a thin peptidoglycan cell wall, this damages the cytoplasmic membrane and allows the escape of the dye-iodine complex. The Gram-positives, on the other hand, typically have a thick peptidoglycan layer that somehow impedes the passage of alcohol or other solvents. It is thought that perhaps solvents render the envelope impermeable by dehydrating the peptidoglycan—a good thought that appears in some writings but for which I have not found the primary sources. I would appreciate it if someone could point me to them.

One further thought. Almost universally, the Gram stain is carried out on heat-fixed smears on a microscope slide. This time-tried step is of course simple and convenient. However, heat and drying may further weaken the cell envelope components, thus adding to the loss of Gram-positivity. For the sake of gaining further understanding of the mechanism of the Gram stain, perhaps studies should be carried out on unfixed cells. I expect that under those conditions some cells may not take up the dye or the iodine solution, but this could probably be tampered with. Anybody know of such studies?

In a simpler world, all bacteria with a single membrane, the monoderms, would be Gram-positive, all those with two (the diderms), Gram-negative. Put taxonomically, all Firmicutes (e.g., Bacillus, Clostridia, Staphylococcus, Streptococcus) and Actinobacteria (e.g., Corynebacterium, Mycobacterium, Streptomyces) would be Gram-positive, all the rest (e.g., Escherichia, Haemophilus, Pseudomonas, Neisseria), Gram-negative. Hah! Were it that simple! Each of these groups includes outliers that stain opposite from the expected way. An illuminating essay on evolutionary considerations that helps understand this state of affairs was recently written by Jeff Errington.

Most monoderms fall conveniently in the Gram-positive camp all right, but there are important exceptions. First, the Firmicutes (so called for the “firmness” of their thick peptidoglycan cell wall) encompass the wall-less mycoplasmas and their allies, bacteria that cannot be stained by the Gram stain at all, which makes the point moot here. Next, some typical Firmicutes (the Negativicutes) stain Gram-negative. To make things worse, at least one firmicute, Acetonema, appears to have the prototypical Gram-negative property, an outer membrane (a fascinating story for some other time, but the reason I got into this subject in the first place). Having a thin peptidoglycan layer may place whole phyla (e.g., the green non-sulfur bacteria or Chloroflexi) within the Gram-negatives, despite being monoderms. 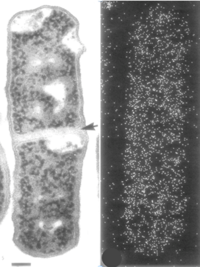 Left: Thin section of a Mycobacterium phlei cell containing TPt-crystal violet complex (darkly stained regions in cytoplasm). TPt is trichloro(eta 2-ethylene)-platinum(II). Right: Dots of TPt-crystal violet complex are revealed by EDS (Energy-dispersive X-ray spectroscopy) in a cell similar to the one on the left. The dots are evenly distributed within the cytoplasm. Bar = 200 nm. Source.

When it comes to consistency, the diderms fare no better. Some, such as Deinococcus, stain Gram-positive because they have an unusually thick peptidoglycan layer, despite being diderms and possessing the two membranes typical of Gram-negatives. And if this were not bad enough, lesions that affect cell integrity can render otherwise Gram-positives to stain as Gram-negatives. Authentic Gram-positives such as members of the genus Bacillus will gradually lose their Gram-positivity and some of their peptidoglycan cell wall after they stop growing. Note that I have not mentioned the Archaea, which are mainly Gram-negative, with some interesting exceptions.

Clinical microbiologists are used to living with “Gram indeterminate” bacteria. The matter of Gram variability is actually quite a bit more intricate than I made it sound. The late Terry Beveridge, whose stellar contributions to microbial cell structure were celebrated in these pages, studied this phenomenon in detail, using a variety of organisms. He cleverly synthesized an iodine analog, trichloro(eta 2-ethylene)-platinum(II), that is electron scattering, hence could be used to look at sections of Gram-stained bacteria in the electron microscope. Read his paper for details. In brief, anything that damages or weakens the cell envelope may turn Gram-positives negative. This includes the thinning of the cell wall peptidoglycan layer that happens as some cultures age, or the weakening of the protein S-layer, with which some bacteria and many archaea are endowed. Gram staining imposes great stress on the integrity of such organisms, so it’s not surprising that Gram-positivity can be readily lost. Note that it’s relatively easy for a Gram-positive to become Gram-negative whereas the converse is not the case. This may not be the whole story because fragments of Gram-positives have been reported to stain positive, possibly suggesting an alternative mechanism for the Gram stain. 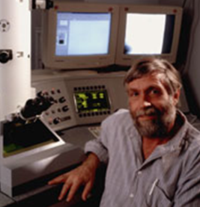 Let me wrap this up by saying again that most monoderms stain Gram-positive, most diderms, Gram-negative. However, there are important exceptions. Knowing that an organism is a mono- or a diderm doesn’t tell you for sure what its Gram staining properties will be. Some monoderms stain negative, some diderms, positive. What seems to count is how thick and intact the peptidoglycan layer is. And, I should add, the Gram stain is not useful to distinguish the Archaea, which don't have peptidoglycan and stain in a seemingly unpredictable manner. It’s a miracle that despite these shenanigans, the Gram stain remains a major tool in the clinical microbiology lab. And, for all the exceptions, it proved to be a key tool in the elucidation of central properties of the bacterial cell.

I thank Jeff Karr, the ASM archivist, for supplying original material for this paper.