A Day in the Life: Eavesdropping on Marine Picoplankton ESP being tested by divers at the Monterey Bay Aquarium Research Institute. Source.

Observing microbes in nature is a challenge. Compared to what goes on in the lab, there is not much one can do with them out there. So, instead of bringing the bacteria to the lab, why not bring the lab to the bacteria? Imagine being able to capture the expression of genes of a community of microbes in situ, and over multiple time points. This movement of the microbial stage to natural environments has been done for microbial niches that are easily accessible, such as agricultural soil, hot springs, or mine washes. But inhospitable sites far from a lab, sites such as hydrothermal vents and the open ocean, pose a bigger problem.

The solution? A steadfast robot designed and dispatched by researchers at MIT and the Monterey Bay Aquarium Research Institute. Known as the Environmental Sample Processor (ESP), this robot gathers samples of seawater and stores them temporarily so as to preserve the RNA transcripts for subsequent retrieval and analysis. ESP is also able to perform DNA and protein hybridization to identify and quantify specific molecules.

Researchers have already put ESP to work monitoring the daily lives of picoplankton in the Pacific Ocean. During a two-day study, ESP sampled seawater at a depth of 23 m every four hours as it drifted southeast off the California coast. At each sampling site, it recorded the precise location and pertinent environmental data (e.g., water temperature and salinity, and photosynthetically available radiation or PAR. It immediately filtered each sample to capture microbes between 0.22 and 5 μm, then stored the filters for later processing in the land laboratory. After the two days, the stored filters were transported back to the laboratory where transcripts were isolated, reverse transcribed into DNA, and then sequenced. The next step was to determine who was there. Transcripts were matched to microbes and then quantified; the results indicated a dynamic ecosystem with a diversity of microbes present. The researchers focused on the most abundant microbes that included the autotrophs Ostreococcus (an eukaryotic green alga) and Synechococcus (a cyanobacterium), as well asthe heterotrophs Pelagibacter, SAR86, and the archaeal MGII. Although the relative abundances of each microbe changed throughout the two days, the five microbes listed above continued to dominate the ecosystem. Cameo appearances were made a number of other bacteria.

Daily life in the open ocean

How did these microbes spend their days? Since some of the autotrophs had been previously cultured, something was known of their daily metabolic patterns in the lab that could be compared with their activities in situ. The heterotrophs, on the other hand, were only known from environmental metagenomes or through single cell genomic sequencing and how they might respond to environmental cues in their daily lives was a mystery. So, what did the robot find?

First, results from the robot sampling confirmed that lab conditions with day/night cycles closely mimic nature’s way of dictating gene expression in autotrophs. A previous lab study had shown that gene expression dynamics in Ostreococcus followed a diel cycle, consistent with their dependence on sunlight. Cells started their day by expressing genes that encode photosynthesis, lipid metabolism, and DNA repair, then set about obtaining nutrients. Late in the day, genes encoding DNA replication and mitosis were expressed, meaning that it was time to reproduce. Finally, nighttime was spent expressing genes for translation and protein synthesis. This pattern indicated that a day in the life of Ostreococcus starts by harvesting energy, then using that energy to grow and divide, and finally ending the day with preparations for the next go-round.

The diel patterns of gene expression in wild populations of Ostreococcus (A) and Synechococcus (B). Source.

Many of the genes with a diel expression pattern in the lab were similarly expressed in “wild” Ostreococcus, indicating remarkable congruence between the daily patterns elicited under lab conditions and those now observed in a natural environment. However, lab culture appears to have disclosed only part of the daily story, as diel expression of some genes was evident only in the open ocean. The diel pattern may indeed be more complicated in nature than in the lab.

The daily pattern of gene expression by Synechococcus mirrored that of Ostreococcus. Sequence information indicated that the sampled wild Synechococcus populations included several ecotypes, each ecotype being a lineage distinguished by its ability to assimilate nitrogen and respond to light. All the ecotypes showed synchronous gene expression and the pattern agreed closely with that for lab-grown Synechococcus, despite differences in available light. As was the case with Ostreococcus, a subset of genes was expressed only in the wild. 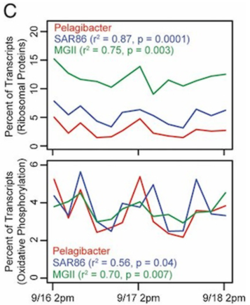 Surely such a well-choreographed pattern was to be expected for the light-dependent autotrophs, but it was surprising that the heterotrophs also cycled together through particular functions throughout the day. Nutrient scavenging pathways were upregulated late at night and early in the morning, whereas protein synthesis dominated in late afternoon and early evening. By switching between expression of genes that encode nutrient transporters and those that encode ribosomal proteins, the heterotrophic bacteria cycled between obtaining nutrients and utilizing them for biomass production.

Why these similarities, given that the carbon utilization patterns of the heterotrophs were predicted to differ? Pelagibacter is expected to catabolize small carbon molecules (e.g., amino acids), SAR86 and MGII to feast on macromolecules (e.g., proteins). Consistent with their predicted competition for carbon sources, the abundance of SAR86 and MGII were negatively correlated. Can these similarities be blamed on the environmental cues that drive these daily cycles? Only one clear relationship was reported, namely for Pelagibacter, whose shifts in gene expression correlated with variation in PAR. Although SAR86 and MGII did exhibit similar PAR-related cycles, the overall magnitude of their response was weaker and varied less between time points than in Pelagibacter. So, much is left to be learned.

Despite the observed fluctuations in expression of nutrient acquisition pathways, the authors did not see anything indicative of a transition into stationary phase nor of growth limitation by any single nutrient. Does this mean the microbes were finding enough to eat to support a minimal extent of growth? Or were they perpetually stuck in a quasi-stationary phase? Perhaps the feast and famine conditions created in the lab don’t occur in ocean waters, the cells instead being perpetually exposed to a meager continental breakfast.

Questions remain but we’re assured that a day in the life of marine picoplankton is packed with activity: nutrients are obtained, growth proceeds, and preparations for the next day then commence. Although autotrophs clearly respond to sunlight, the hint of an additional factor affecting the timing of their gene expression in the wild, as well as the synchronous gene expression in metabolically diverse heterotrophs, begs the question: are all these microbes responding to the same environmental cue? Perhaps, but they may not be responding directly to it, the authors stressed. In complex communities such as this one, cells are not recluses, nor are they deaf to signals from their neighbors. Instead of each one directly sensing the environmental change, some may perceive a downstream signal produced by another species in response to that cue. Thus, interspecies communication could be key: some species might be the sentries that detect environmental change, then relay a message to their neighbors who might modify it and then pass it on. The resultant rapid amplification through the community would lead to a well-rehearsed ecosystem response. At this point we can’t be certain, but no doubt future sampling expeditions by ESP will be informative. Surely this robot has a bright future.