A PomZ Scheme For Turning One Cell Into Two

The division of one cell into two daughter cells is the crux of biological reproduction. But how do cells determine where along their dimensions division will occur? For bacteria, the best-studied species for basic biology, including cytokinesis, are the old standbys Escherichia coli, Bacillus subtilis, and Caulobacter crescentus, mainly because of their easy cultivation and genetic tractability.

But, given bacterial diversity, the lifestyles of these representative workhorses aren’t necessarily the norm; they can even be relatively boring compared with the habits of others like the myxobacteria. One such species with exceptional behaviors is Myxococcus xanthus, whose cells travel in packs, eat other bacteria, and differentiate into fruiting bodies when their food runs out, eventually forming spores. Of course, in addition to moving around and eating a lot, myxobacterial cells still need to divide. Recent results from Lotte Søgaard-Andersen’s group and their collaborators show that the way myxobacterial cells select where to split into two is also out of the ordinary. 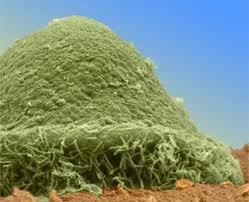 A Myxococcus xanthus fruiting body showing individual vegetative rods on the outside. Source.

As we’ll see, selection of the division site in M. xanthus is aided by a protein called PomZ, which immediately brings to mind “Ponzi scheme”, also known as a “pyramid scheme” . This connection may seem a bit far-fetched at first but, as shown in the diagram, M. xanthus cells use PomZ to increase their numbers until their population becomes unsustainable. At this point they form a fruiting body, which does look a bit like a pyramid. Other myxobacteria, to their credit, make fruiting bodies that are more elaborately shaped—suggesting that M. xanthus may be the relatively dull E. coli of myxobacteria.

E. coli, B. subtilis, and C. crescentus each grow by diffuse incorporation of cell wall and membrane (as opposed to targeted growth at a cell pole or division septum, a characteristic of most cocci, some α-proteobacteria, and actinobacteria). Because of this diffuse style of growth, the middle of a rod-shaped cell has no obvious markers, as it has been made de novo. Contrast this to the poles of these cells, were the division sites of one generation earlier, and which do not grow much. So, it is a challenging prospect for a rod-shaped cell to define its middle — how can it put a positive marker there if there is nothing there to define it?

One way to do this would be for the cell to measure the distance between the two opposing cell poles, using a marker that could recognize those poles (which wouldn’t be so hard, as they potentially have markers based on the previous cell division event). The cell midpoint would then simply be the spot equidistant from the two poles that is furthest from the markers. This would work quite simply if the polar markers act negatively on cell division. By blocking formation of a division site near the ends of a cells, these polar markers would indirectly bias division site selection toward the center of the cell.

That is essentially what both E. coli and B. subtilis do by controlling the assembly of the division protein FtsZ. FtsZ is a highly-conserved bacterial tubulin homolog that assembles into an essential cytoskeletal structure, called the Z ring, at the division site before any known factor gets there. Therefore, if a cell wants to regulate the position of its division site and has cell poles as historical markers, it makes sense to encourage assembly of FtsZ at the cell midpoint and to discourage its assembly everywhere else—in short, by negative regulation. This scheme is implemented by deploying an FtsZ assembly inhibitor protein and its partner, MinC and MinD, along a spatial gradient between the two cell poles. The concentrations of the MinC(D) inhibitor and FtsZ are so tuned that the Z ring forms in the zone of lowest MinC(D) concentration. C. crescentus constructs a similar morphogen gradient using a MinD-like negative regulator called MipZ. The story is more complicated because other factors also play a role in centering the Z ring besides the Min system.

Min systems are present in diverse species of bacteria and even in chloroplasts. However, M. xanthus is one of many species that lack Min homologs. Its cells are quite long and thin, about 4-5 microns on average, which suggests they depend on a robust measuring system to divide in the middle. Søgaard-Andersen’s group and their collaborators discovered that a protein they named PomZ, for “positioning at midcell of FtsZ” is important for Z ring positioning in M. xanthus. It belongs to the same diverse protein family as MinD but unlike MinC(D), PomZ localizes to the mid-cell division site just prior to and during cell division, and apparently independently of FtsZ! Nonfunctional mutants of pomZ divide poorly, forming Z rings at lower frequency and in the wrong places (although some cell division still occur). These results suggest that PomZ, unlike the Min proteins, may not function as a negative spatial regulator but may instead have a positive role in spatially restricting FtsZ assembly to the mid-cell site.

But the picture gets more complicated. Assembly and disassembly of FtsZ is coupled to its binding to and hydrolysis of GTP, respectively. As expected then, purified M. xanthus FtsZ binds and hydrolyzes GTP. However, rather atypically, it fails to assemble, forming no detectable polymers in vitro, even with the addition of known FtsZ assembly enchancers, suggesting it might be particularly bad at assembling on its own. Other evidence for this possibility is seen in vivo, where overproduction of FtsZ fails to increase Z ring frequency in M. xanthus, unlike what occurs in other well-studied species. Therefore, perhaps M. xanthus FtsZ employs some factor to help ‘stimulate’ its assembly.

As a protein that appears to play a positive role in assembling Z rings at midcell, PomZ would be an attractive candidate for just such a factor. Unfortunately, while the authors find that PomZ associates with FtsZ in cell lysates (i.e. in the presence of other proteins that may ‘bridge’ together an indirect interaction), PomZ does not seem to bind FtsZ directly. Furthermore, PomZ is unable to coax M. xanthus FtsZ into assembling. So, the inability to polymerize M. xanthus FtsZ in vitro remains mysterious and points to yet another positive-acting factor that might work in conjunction with PomZ on FtsZ. 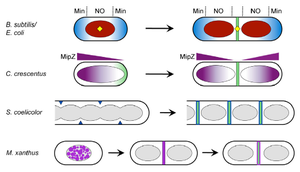 Mechanisms for finding the middle of cells of different bacterial species. See text for explanations. NO is nucleoid occlusion, another negative regulatory system that prevents Z rings from forming over the nucleoid. Source.

Taken together, the evidence suggests that there are two general ways that cells can regulate formation of the Z ring: make assembly rather promiscuous and discourage it at certain times and places by negative regulation (as, in E. coli), or make assembly difficult, and induce it at the right times and places by positive regulation (as in M. xanthus). The biochemical data indicate that PomZ is an important part of the process but is not the primary regulator. In this sense, PomZ has a kinship with its ATPase cousin MinD: it is a key positioning factor that recruits another protein that directly affects FtsZ assembly.

So, what tells PomZ to go to the cell center? That gets to the heart of whether PomZ is part of a positive spatial regulatory system. The protein certainly takes a circuitous route in the cell. In newborn cells, the authors found that PomZ localizes over the entire nucleoid, potentially binding to multiple sites on the chromosome. At a later point in the cell cycle, PomZ relocalizes to an off-center focus, perhaps the edge of the nucleoid, before relocalizing yet again to the cell center where it persists throughout cytokinesis. FtsZ also seems to generally follow this localization pattern. This relocalization of PomZ is probably cell cycle regulated, because overproducing PomZ inactivates its function and causes it to localize aberrantly. As PomZ gets to mid-cell before any other known protein, it may be responding to a localized domain of the nucleoid (such as the replication terminus, which in other bacteria localizes near mid-cell) or to another negatively acting bipolar gradient. Given the complexity of regulation of other processes in M. xanthus, there may be several layers of control, of which PomZ is just one.

Interestingly, recent results from the van Wezel group disclose that Streptomyces uses positive spatial regulators to directly recruit Z rings too. Here again, what is not known is how those proteins get specifically targeted to division sites, and it could certainly be that negative spatial regulation still has an important role. After all, measuring distances from something that already exists does make the most sense for directing a factor to a new location. Perhaps the PomZ scheme for cell division is actually more similar to a Ponzi scheme than is first apparent: even though PomZ is present at the middle of the cell and is doing something important, it is likely that another factor has to do the hard counting and measuring work to find the site first. It would be a crime not to find what that factor is.

William Margolin is professor in the Microbiology and Molecular Genetics department at the University of Texas Medical School at Houston and is director of the graduate program.