On October 28, 2010, Elio posted this Talmudic Question: “Richard Feynman, the famous physicist, said: It is very easy to answer many of these fundamental biological questions; you just look at the thing! To take him up on it, imagine a microscope that lets you observe single molecules in a living cell at one Angström resolution. What's the first thing you would do with it?” Thank you, Elio for allowing me to provide some thoughts on the matter from the perspective of a physical chemist/chemical engineer.

Such a microscope could indeed help address some of the fundamental issues in biology today. I must say upfront that I am surprised that microbiologists would want to look at (small) molecules (‘pure’ chemistry), or at the chemical details of ‘bigger things’, as suggested by the very notion of using a ‘Schaechter-Feynman supermicroscope’. This hypothetical instrument would have a resolution of 0.1nm with exposure times in the picosecond range (making it a bit akin to an infrared spectrophotometer) and would operate in Feynman’s quantum mechanical world. It would look at the chemistry of biology, dissecting cells into their molecular components that are then chemically characterized individually. But let me explain this more…

What Should We Look At?

Feynman suggested that ‘seeing better’ is ‘better.’ However, what we see often depends on what we are looking for. At such very high resolutions, we risk focusing on details so small that we lose context and perspective, like looking at the leaves of individual trees and losing sight of the surrounding forest. We will also miss the lakes, the meadows, and even the blazing sunset—the reddish light scattering forward from the nucleating particles of the nano-fog, the beauty of which, Feynman insists, a mere poet may miss (1). Similarly, a narrowly-focused molecular researcher overlooks the relationship of the detail to the living whole (2,3). I would suggest observing at a slightly larger scale, say dimensions of 10 to 100 nm and durations of a millisecond, to see the ‘metabolons’, ‘modules’, ‘hyperstructures’, and the many functional protein complexes (signalsomes, stressosomes, transcriptomes, dividisomes, etc.) to find out if and how they exist as discrete physical objects. We might then see these large, transient biomacromolecular clusters appear and disappear, and see them interact at the subcellular level. We could take full advantage of the atomic resolution of this supermicroscope to visualize ionic currents of ATP, GTP, phosphates, K and Mg ions, bicarbonate, glutamate etc., tracking them from their origins to where they sink and disappear. Even the vectorial ionic currents generated in the cell envelope with their movements through and around the large ‘omic’ biomacromolecular clusters could be visualized as the cell grows. What would we see when a bacterial cell begins to die? Will the ionic currents ‘die’? (4-6). So many events to explore with our supermicroscope!

What Did Feynman Actually Say?

Feynman’s suggestion betrays the physicist’s ‘weltanschauung’, the world view that Feynman-influenced biologists focused on. At the time, however, neither biologists nor physicists understood what the ‘thing’ to look at was. The situation then was similar to one that chemists had to face 100 years earlier (circa 1860)—having to develop methods of chemical analysis: first, qualitative—to know what kind of atoms and molecules one is dealing with, and then quantitative—how many, in what proportions, their structures, the chemical reactions between them, etc. It is worthwhile to reprint that section of Feynman’s (‘nanotechnology’) talk:

What are the most central and fundamental problems of biology today? They are questions like: What is the sequence of bases in the DNA? What happens when you have a mutation? How is the base order in the DNA connected to the order of amino acids in the protein? What is the structure of the RNA; is it single-chain or double-chain, and how is it related in its order of bases to the DNA? What is the organization of the microsomes? How are proteins synthesized? Where does the RNA go? How does it sit? Where do the proteins sit? Where do the amino acids go in? In photosynthesis, where is the chlorophyll; how is it arranged; where are the carotenoids involved in this thing? What is the system of the conversion of light into chemical energy? It is very easy to answer many of these fundamental biological questions; you just look at the thing! You will see the order of bases in the chain; you will see the structure of the microsome.

For the record, the “microsomes” contained circa 20 nm ‘granules’, which were eventually purified and characterized as today’s ribosomes. 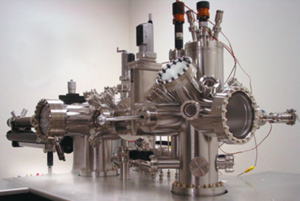 Obviously, looking at the ‘thing’ is not that simple. The ‘thing’ could be an artifact of sample preparation. The history of electron microscopy has provided us with many such artifacts (7,8) and this remains an issue today for the new spectroscopic in vivo methods (9,10). There is also the sampling problem—the variability between and within cellular populations. It is challenging to maintain populations of ‘model’ bacterial strains ‘frozen in evolution’ and ‘constant’, therefore reproducible between different laboratories. In addition, the physiological state of a cell population varies with the time of sampling, as well as with environmental and nutrient conditions (11, 12). This would be a shock for Feynman, who thought about ‘the thing’ as something static, picturing biomacromolecules as ‘sitting’ somewhere. This is important for nano-technology (Fig. 1), because when things ‘do not sit’, ‘molecular hell breaks loose’ thanks to the second law of thermodynamics—the entropy (disorder) seeking to maximize itself. Indeed the greatest achievements of nanotechnology have been so far mainly in the areas where molecules do ‘sit’, i.e. in the solid state.

The Sum of the Parts

Which brings me back to the ‘reductionist’s problem’ encountered when attempting to reduce (‘soft matter’) biology to chemistry. Can we really understand a ‘living’ system (a bacterial cell) by taking it apart, then identifying all its components by their chemistry and structure? This, after all, is what X-ray crystallography and NMR are achieving. The biochemical and physiological functions of many proteins and nucleic acids have been elucidated through enzymology and genetic studies (mutant analysis, for the most part). But to reiterate Craig Venter’s observation: No single cellular system has all of its genes understood in terms of their biological roles (13). In fact, a protein may have two (or more) functions (moonlighting proteins), e.g., glutamate racemase, essential for providing the D-glutamate needed for bacterial wall synthesis, also inhibits DNA gyrase. I would argue that today’s fundamental challenge in cellular biology is that RNA and proteins do not ‘sit’; they move, as does ATP, ions, water molecules, DNA, the ribosomes, even the cell itself. They all move on time scales that span about 10 orders of magnitude, from picoseconds to seconds! And they move about in a crowded environment, where molecules and macromolecules in very close molecular proximity interact with each other, breaking and making chemical bonds, non-covalently attracting and repelling one another with molecular forces ranging during the cell cycle from the ultra-weak (transient, non-heritable) to the very strong (permanent, ‘heritable’) (4,5, 14-17). 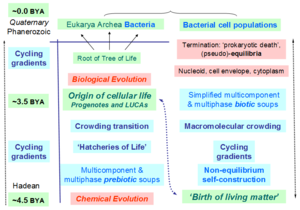 (Fig. 2.) The transition from chemical evolution of ‘prebiotic soups’ to biological (Darwinian) evolution at the origin of life 3.5 BYA, and the potential ‘birth of the living state’ from the ‘biotic soup’ of extant bacterial populations. 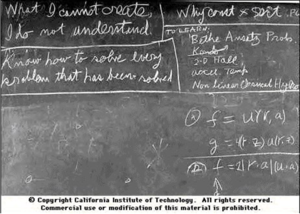 (Fig. 3.) Feynman’s enduring sentiment: ‘What I cannot create, I do not understand’.

The great achievement of the reductionist paradigm, of the taking apart of living things, is the demonstration that all we see there is just ‘ordinary’ chemistry and physics. The chemistry of the lipids, proteins, and particularly the nucleic acids (the genetic code) is the ‘same’ for all living things; unique living systems are each a variation on the same chemical theme composed from relatively few chemicals—the ‘building blocks of life’ (12). These biomolecules and biomacromolecules have been synthesized by non-biological methods of organic chemistry, starting with Wöhler’s synthesis of urea in 1828 and culminating with the chemical synthesis (and enzymatic assembly) of the chromosome of the bacterium Mycoplasma mycoides (13). There can be little doubt that all such synthetic biomacromolecular products will have the same properties (chemical and biological) as those synthesized enzymatically by cells. However, it is when the molecules and macromolecules come together in a dynamic environment that the ‘living state’ of matter is born. Because we do not yet know how the ‘living state’ of matter comes about, we are astonished at seeing bacterial cells ‘do what they do’—growing and dividing at an incredible speed, sometimes in less than an hour! Even more astonishing is the fact that cellular populations of progenotes and universal ancestors (18,19) emerged 3.5 billion years ago! In my opinion, efforts should focus on ‘putting Humpty-Dumpty together again’ (20), synthesizing ‘life’ (21), or coaxing ‘life’ to emerge from a ‘biotic soup’ (22), mimicking the emergence of the chemistry of life from the ‘prebiotic soup’ (Fig. 2) about 3.5 billion years ago (23-25). These ‘synthetic’ approaches will have to take into account the physical chemistry underlying the in vivo state of living cells i.e. the transient interactions of crowded biomacromolecules within them, and their cyclic non-equilibrium nature (14-17,20). Here Richard Feynman’s other, much later sentiment comes to the rescue: What I cannot build (create), I cannot understand (Fig. 3). It is clear that microbiologists are in a unique position to devise new protocols to study and even create life, without having to chemically synthesize anything, by taking bacterial cells apart, ‘killing them gently’, and then trying to revive the ‘biotic soup’ (Fig. 2). There are no fundamental reasons why such protocols would not work, and they would remove some of the mystery from Pasteur’s dictum 'Omne vivum e vivo'. We just need to figure out how to handle the spheroplasts, protoplasts, the nucleoid, ribosomes, and large protein clusters! Play with them; make them assemble into a living condition. Admittedly, this may not be as easy as just ‘looking at the thing’ but may well turn out to be quite valuable.