« When a Good Peptide Deformylase Gets Better | Main | A Day in the Life: Eavesdropping on Marine Picoplankton »

Pictures Considered #2 : The E. coli Chromosome Caught in the Act of Replicating 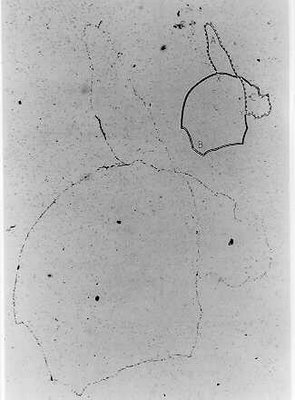 A radioautograph of the E. coli chromosome in the act of bidirectional replication. The image shows a circular molecule with two “rabbit ears”, representing the newly replicated regions. E. coli DNA was labeled with tritium-labeled thymidine by growing the cells for two generations in the presence of this specific DNA precursor. Cairns had developed a method for depositing intact DNA molecules on a microscope slide, then covering it with a photographic emulsion. The slide was then stored in dark for two months to allow the tritium to decay and sensitize enough photographic grains to reveal patterns after photographic development, as seen in this radioautograph. The insert on the right corner of the image shows a tracing of the replicating chromosome, which is a circle nearly 1 mm long. From Cairns, J.P.: Cold Spring Harbor Symposia on Quantitative Biology 28:44, 1963.

We continue our series of images that have made a difference in microbiology. This one, published by John Cairns in 1963 has earned a most deserved place in textbooks and reviews. It shows a radioautograph of an intact E. coli chromosome in the act of replicating. From this image, Cairns concluded that the E. coli chromosome is:

These truths had been surmised from other, mainly indirect pieces of evidence. For instance, the idea that the genome consists of a single chromosome had already been inferred from the fact that only a single genetic linkage group could be found in E. coli. Its circular nature had been suspected because all the genes on the chromosome were circularly permuted. But this image gave these notions physical authenticity, ergo finality. Such important conclusions from one single picture!

In addition, by labeling the newly replicated DNA in the chromosome with a short pulse of tritiated thymidine, Cairns provided conclusive evidence for the bidirectionality of chromosome replication, with each of the two replicating forks containing one new and one old DNA strand.

As pointed out by Christoph Weigel and David Lane, I wrongly attributed to Cairns the evidence that the E. coli chromosome replicates bidirectionally. In fact, the definitive proof stems from a later elegant radioautographic study by Prescott and Kuempel and several equally convincing genetic experiments, e.g., by Masters and Broda. A regrettable memory lapse….. 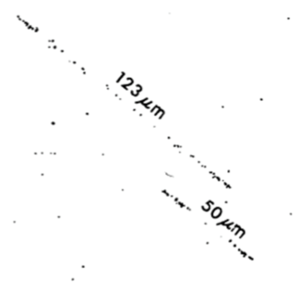