When a Good Peptide Deformylase Gets Better 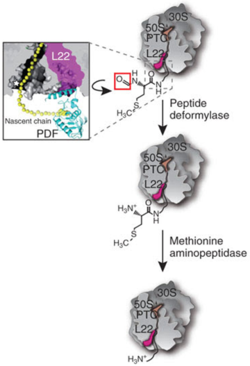 In bacteria, the ribosome-associated peptide deformylase (PDF) removes the formyl group of the N-terminal formyl methionine of nascent proteins. This process is a prerequisite for the proteolytic removal of the unmasked methionine by methionine aminopeptidase (MAP). The enlargement shows PDF (cyan ribbon) bound to ribosomal protein L22 (magenta) next to the ribosomal tunnel exit (white star). The second interaction site of PDF on the ribosome, protein L32, is not visible in this view of the ribosome, which is sliced along the tunnel. The path of the nascent chain is indicated by yellow spheres. Source.

When a phage invades a host’s premises, it delivers only its genome and perhaps a few specialized proteins needed immediately upon arrival. Its plan is simply to supervise production. The host is relied on to provide not only the raw materials and energy, but also the production equipment needed to synthesize phage proteins and nucleic acids. This includes the machinery for further processing each protein as it leaves the ribosome. Sometimes, as in the case of the cyanophages, the host’s equipment isn’t quite enough.

Uniquely, proteins made on bacterial ribosomes, including those encoded by phage, start with an N-formylmethionine residue donated by a special initiator fMet-tRNA. As the N-terminus of the new peptide chain emerges from the ribosome exit tunnel, the formyl group is removed by the enzyme peptide deformylase (PDF); frequently the remaining N-methionine itself is also removed by a separate enzyme. Many proteins as they exit fold into their functional form with the help of a chaperone, the trigger factor (TF), stationed at the portal. Correct folding is essential for protein function, and the formyl group must be removed for proteins to fold correctly. Deletion of the PDF gene in E. coli is lethal. Likewise, actinonin, a naturally-occurring antibiotic that inhibits PDFs, also inhibits bacterial growth and disrupts photosynthesis in the chloroplasts of plants and green algae.

For most phages, a functionally adequate host PDF is something to be taken for granted. However, there is the danger that intense protein synthesis during phage infection can overwhelm the host’s supply of PDF, the upshot being improperly processed, non-functional proteins. This is more likely a problem for cyanophages. While all phages require the synthesis of various proteins used directly for their replication, cyanophages also depend on active synthesis of other proteins needed to maintain the host’s photosynthesis apparatus. This extra burden further taxes the host’s co-translational processing enzymes. Specifically, the high-turnover D1 protein of photosystem II must be replenished—the subject of an earlier post. For this problem, the cyanophages have a solution.

This story began when Sharon and colleagues searched the publicly-available marine metagenomes generated by the Global Ocean Survey (GOS), making use of their novel method to identify bacterial genes encoded in viral, not bacterial, genomes. Their yield was abundant; they found virally-encoded metabolic genes from 34 gene families. Of these 34, the most numerous were the PDFs, yielding 70 genes—all of which were from cyanophage genomes. Mapping of their data by Frank et al. located these phage PDFs throughout the oceans. Finding homologs of bacterial PDF genes in phage is one thing; demonstrating that these genes encode functional enzymes and are expressed during cyanophage infection is another. As a big step in that direction, Frank and colleagues demonstrated that cyanophage S-SSM7, a phage infecting the cyanobacterium Synechococcus WH8109, encodes a functional PDF with some phage-specific quirks.

(A) Crystal structure of Synechococcus phage S-SSM7 peptide deformylase (PDF). (B) Overlay of phage S-SSM7 PDF (green), Synechococcus elongatus PCC 6301 PDF (cyan), and A. thaliana chloroplast PDF1B (magenta) shows striking similarity of protein folds, as well as the position of the zinc ion in the active site. The bracket indicates the C-terminal α-helical domain present in the bacterial and chloroplast PDFs, but absent from the cyanophage PDF. Source.

The amino acid sequence of this phage PDF places it within the type 1B PDFs, the type found in cyanobacteria, chloroplasts, and other cyanophage. Its closest homolog is the PDF of Arabidopsis thaliana chloroplasts. The researchers also solved its structure to 1.95 Ǻ by X-ray crystallography, then compared it against the structure of the PDF from a cyanobacterium (Synechococcus elongatus) as well as the one from Arabidopsis chloroplasts. The folds of all three are strikingly similar. The PDF active site is formed by the juxtaposition of three separate regions of the folded polypeptide chain. The amino acids in those essential regions are conserved in all the PDFs found in cyanobacteria and in bacteria-derived organelles (chloroplasts, mitochondria, apicoplasts). That they are also conserved in this cyanophage PDF suggests a similar catalytic activity for the phage protein.

However, the C-terminus of the cyanophage PDF differs markedly. The canonical type 1B PDF, including the ones made by cyanobacteria and by E. coli, has an α-helical C-terminal domain that is important for function. Truncating that helical domain reduced the growth rate for E. coli at least tenfold. Structural studies suggested that this domain positions the enzyme at the ribosome exit tunnel where it can act on the emerging peptide chain before folding obstructs access to the N-terminus. The PDF of cyanophage S-SSM7 lacks that helical domain, as do at least 50 of the 70 cyanophage PDFs identified by Sharon et al. in the GOS metagenomes. This leads one to wonder if these truncated phage PDFs are catalytically active. Frank and colleagues investigated this directly using a deformylation assay to compare the activity of the truncated cyanophage PDF with that of the cyanobacterial PDF from S. elongatus. Not only was the phage PDF active, but it had higher in vitro catalytic activity than its cyanobacterial counterpart. The researchers were aware that synthesis of abundant D1 protein is a cyanophage priority, and also that the PDF of Arabidopsis chloroplasts is more efficient at processing D1 protein than other cellular proteins. They wondered if the cyanophage enzyme might also be most active on D1. Since the assay substrates are tetrapeptides containing N-formylmethionine, they compared enzyme activity on N-terminal tetrapeptides from D1 proteins versus those from the highly-expressed ribosomal proteins. Specifically, as a proxy for ribosomal proteins they used the four most common N-terminal tetrapeptide sequences encoded in the ribosomal genes of various Synechococcus species. For D1, they used the N-terminal tetrapeptides from the cyanophage’s own D1 protein and from three D1 proteins from S. elongatus. The phage PDF showed consistently greater activity on the D1-derived tetrapeptides. We are left to wonder how this can be, how phage PDFs, lacking that C-terminal helix, not only do their job but do it better than the ancestral cyanobacterial form of the enzyme.

Metabolic genes found in phage genomes, such as this PDF, have been casually referred to as “host” genes, often with the implication that the phage have no respect for intellectual property and simply steal whatever they find useful. But these cyanophage PDFs, although clearly related to the bacterial enzymes, now differ from them in both structure and function. The cyanophage have modified them to better suit their specialized purposes, in this case for greater activity on the high-turnover D1 protein needed to maintain host photosynthesis during infection. But the story doesn’t have to end with this unidirectional transfer of genes from bacterium to phage. Other researchers earlier provided evidence that core genes of photosystem II, genes that had also been acquired by cyanophage from their hosts, have made that move multiple times; they have also moved from cyanophage back to host. Phage and bacterial gene pools overlap. We can think of the rapidly-evolving phage as providing foster homes for bacterial genes. While the genes are in their care, they can diversify more rapidly and under different selection pressures, and then sometimes return home with new capabilities.