Who Would Have Thought? One Hundred Million Year Old Polyamines

Paleontologists are greatly helped in their work by finding organic compounds that have been preserved in fossils through the ages. Most useful among these are the amazingly stable polycyclic terpenoid lipids, in particular the bacterial hopanoids (Click here and here), that are present in fossils about 2.4 billion years old. But it helps to have other classes of compounds at hand. This is especially true for nitrogen-containing ones, which are absent in hopanoids and the like, and could be used as indicators of changes in the nitrogen cycle over geologic time. 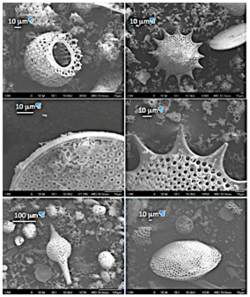 Scanning Electron micrographs of solvent-and acid-cleaned fossil diatom shells or frustules show well-preserved structural details that match well the shell structure of modern diatoms. This demonstrates that diagenetic alterations were minor during fossilization. (Diagenesis is the term used by geologists for changes after sediments are deposited). Source.

And here come the good news. A recent study reported the presence of unusually long-chain polyamines in the oldest known fossil diatoms, which go back to some 100 million years ago. Using some advanced mass spectrometry (MS) analytic techniques called HPLC-ESI-MS and HPLC-QToa-TOF-MS, the authors demonstrated that the diatom fossils contain a large number of polyamines ranging in chain length from 12 to 52 carbons. The authors propose that these molecules were preserved by encapsulation as the glassy shells of the diatoms were formed. Amazingly, the fossils’ polyamines have the same structure as those formed by modern diatoms, thus, they were able withstand the pass of time and are preserved intact. The fossilized diatoms lived in the Lower Cretaceous, a time that was particularly propitious for diatom development due to the high concentrations of CO2 in the atmosphere and the abundance of silica in the oceans. It is likely that the polyamines participated (as they do now) in the deposition of the diatom’s shells by combining with silica and making insoluble aggregates. But they may have played additional roles, based on the various functions of the present day polyamines. These functions range from regulation of virulence genes in bacteria and epigenetic switches in eukaryotic cells to senescence in plants, just to name a few.

Finding these ancient organic compounds has wider ramifications. In the authors’ own words: The use of recalcitrant long-chain polyamine biomarkers offers a promising approach for reconstructing the biogeochemistry of the photic zone and to ultimately identify the links between nutrient cycling, biological productivity, and climate change across abrupt climate change events in the geological record. Who would have thought!