« Pictures Considered #3 : How Do You Know There Is a Nucleoid? | Main | A Good Defense Is Worth Stealing »

E. coli Cells Face FACS and Get Back into Shape

Figure 1: The importance of size and shape to the animal kingdom. (A) A well-adapted giraffe enjoys the fruits of its evolutionary labor. (B) Beak variations among Darwin’s finches. (C) A bonobo uses his opposable thumb to dig for termites.

There’s no question that variation in size and shape has conferred selective advantages over the course of evolutionary time. One of the most obvious examples is the long neck and legs of the giraffe, which allow it to snatch foliage that is unreachable by vertically challenged competitors. The variable beak shapes and sizes of Darwin’s finches represent the diverse tool set that evolved when only certain food sources became available. And the appearance of the opposable thumb, a simple change in hand shape, undoubtedly influenced the course of human history.

Size And Shape On A Smaller Scale

More recently, microbiologists have appreciated the selective power of size and shape among bacteria. For example, a temporary ban on cell division in uropathogenic Escherichia coli allows the long, filamentous cells to avoid phagocytosis in the host. Helicobacter pylori depends on its strikingly helical shape to establish residence in the host’s stomach. In both cases, we are beginning to understand the molecular mechanisms dictating these adaptations in size and shape. However, these studies have also cast a glaring light on how little we still know about how bacteria acquire and maintain their distinctive morphology. Should we call cell shape the forgotten phenotype?

The Need For Speed

How to begin tackling this question experimentally? As molecular microbiologists, our first inclination is to suggest a genetic screen or selection to isolate mutants with odd shapes. But this approach is complicated for two reasons. First, screening for shape mutants often requires microscopic observation of hundreds or thousands of cells, which requires a lot of time and patience. Second, aberrantly shaped bacteria often show little effect on their growth rate or survival in the lab, which requires complex and clever selection conditions.

With these problems in mind, members of Kevin Young’s laboratory developed an automated approach to distinguish normal-shaped E. coli cells from odd-shaped ones. This screening method requires fixing and fluorescent staining of cells, then running them through a flow cytometer capable of detecting the shape of cells streaming single file past a laser beam. Although this technique is a vast improvement over manual screening procedures, Young’s laboratory recently tweaked the process further, forgoing the staining step and using live cells rather than dead, fixed ones.

How, do you ask, are the cells sorted without a fluorescent dye? It turns out that the forward scatter of light, which is recorded by a detector in line with the laser beam, is different between normal and odd-shaped cells. As proof of principle, this laboratory compared the light scatter of normal, rod shaped E. coli cells to abnormally shaped ones that lack penicillin binding proteins (PBPs) 4 and 7. These are endopeptidases that cleave crosslinks in the cell wall and influence cell shape. The authors also used mutants in PBP5, a D,D-carboxypeptidase that removes the terminal D-alanine from side chains in the peptidoglycan layer and plays a major role in determining normal cell shape. The forward scatter of the shape-defective cells becomes skewed to the right in the scatter plot compared to the normally shaped cells, indicating that differences in light scatter between cells of different shapes even when the cells are not fluorescent can be detected. 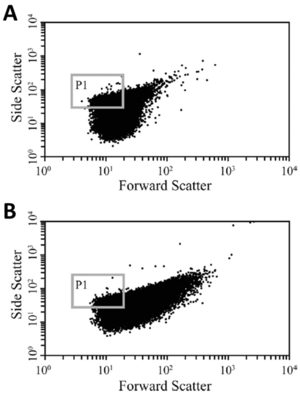 Figure 3: Scatter plots of normal (A) and abnormally (B) shaped E. coli cells subjected to flow cytometry. The selection gate used to enrich the suppressors is shown as the grey box labeled “P1.” Source.

Once they confirmed that flow cytometry is capable of distinguishing differences in the shape of these strains, the researchers used this technique to isolate suppressors of the abnormally shaped cells. Here, suppressors are mutants that where the normal shape is restored. To find such suppressors, they used the flow cytometer once again, but this time as a device for cell sorting without the use of fluorescence or CS (“FACS without the FS”). Using FACS one can collect (not just enumerate) a subpopulation of cells based on its fluorescence or, in the case of CS, its light scatter. Suppressors of abnormal cell shape were selected by performing CS on aberrantly shaped cells but collecting only those cells that exhibited a forward light scatter similar to normally shaped cells (designated as “P1” in Figure 2). This subpopulation was then subjected to repeated rounds of growth and further CS until the distribution of light scattering among the once aberrant cells closely resembled the profile of normal cells. Of the isolated colonies selected from this population of potential suppressors, ~50% exhibit near normal light scattering profiles. Microscopic observation also confirms that these isolates were of normal shape. In total, four suppressor mutants were isolated from three different shape-deficient strains. Additionally, through directed mutagenesis, these workers also found that peptidoglycan endopeptidases AmpH and MepA appear to negatively impact cell shape in at least one of the suppressor strains, indicating that other endopeptidases may also play a role in cell shape.

The Young team will fully characterize the isolated suppressors at a later date, but they note that the mutations are not in or near the genes encoding known penicillin binding proteins. This bit of information demonstrates that the FACS enrichment procedure may indeed fulfill its desired role of helping discover novel pathways for shape generation and maintenance. These new cell-shape determinants could serve as attractive targets for drugs that inhibit the morphologic changes need for optimal virulence of pathogens, such as E. coli or H. pylori, and further prove that size (and shape) truly does matter.

Kimberly Busiek is a Ph.D. candidate in the Microbiology and Molecular Genetics program at the University of Texas Health Science Center at Houston. Like associate blogger Dr. Daniel Haeusser, she is a member of Dr. William Margolin’s laboratory where her thesis research focuses on the molecular mechanisms of cell division in the bacterium Escherichia coli.