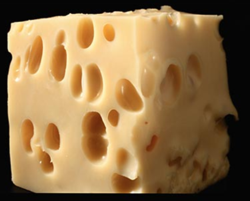 As a child, I was always fascinated by the holes (or eyes) in Swiss cheese, always inspecting the tunneling system before getting a good bite. Although the holes are the result of microbial activity (the accumulation of CO2 released by fermentative bacteria), I bring up the Swiss cheese analogy for very different reasons. Try to picture a similar landscape of tunnels and holes in a bacterial biofilm. And that’s what today’s story is about … a ‘holey’ biofilm. 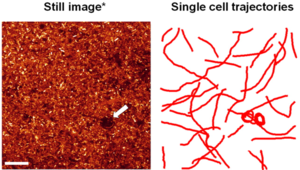 B. thuringiensis biofilms are pierced with holes and tunnels created by the planktonic swimmers. The arrow points at a large hole formed by the collective motion of a chain of cells. (Scale bar, 20 μm). The trajectories of the swimmers that lead to the formation of the biofilm holes is shown on the right panel. Source.

In a recent study published in PNAS, Houry and collaborators used time-lapse microscopy to monitor the biofilms formed by the bacterium Bacillus thuringiensis and noted that a small subset (0.1 to 1%) of all the cells in the biofilm were motile. The rest of the cells were sessile and immobile except for some minor oscillatory motions hampered by the surrounding biofilm matrix. The swimmers infiltrated the biofilms in all directions, creating a landscape of tunnels and holes like in Swiss cheese. By tagging planktonic cells (that is, cells growing free in the surrounding liquid) with the green fluorescent protein (GFP), the authors showed that the biofilm swimmers were in fact planktonic cells. The swimmers infiltrated the biofilms independently of the flow dynamics of the surrounding fluid and their tunneling activity was exclusively dependent on the rotational activity of their flagella. Despite the biofilm barrier, the swimmers had average velocities as high as 7.3 μm/s in young (24 h old) biofilms. For a movie showing these rapid motions, click here. The swimming velocities decreased progressively as the biofilms aged, with the lowest velocities (4.2 μm/s) being measured in the oldest (72h old) biofilms. This is because the biofilm matrix also becomes more dense and rigid over time (and, therefore, more difficult to permeate). Still, these speeds are remarkable for cells that are swimming through a biofilm matrix! 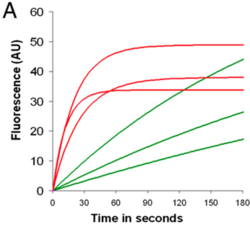 An FITC-dextran molecule was used to demonstrate that the tunnels and pores created by the bacterial swimmers promote biofilm irrigation and nutrient flow. The tracer reached the basal layer of the tunneled biofilms (red curves) in 30-50 s. By contrast, its permeation was slow and incomplete in biofilms formed by a nonmotile mutant strain (green), which lack tunnels. Source.

Although the biofilm tunnels were transient (lasting 2-5 s), new ones formed as the old ones sealed. They were also large enough to permit the passage of a high molecular weight (250 kDa), fluorescently labeled tracer molecule (FITC-dextran). Despite their large size, the tracer molecules reached the bottom of the tunneled biofilm in just a few seconds (30-50 s). By contrast, their permeation was slow and incomplete with a nonmotile strain, which forms structurally similar biofilms but without tunnels. This suggests that the tunnels promote biofilm irrigation, thus allowing nutrient flow throughout the sessile community and dissipation of toxic metabolites.

The authors also noted that the tunneling behavior was strain-specific. One motile strain of Yersinia enterocolitica, for example, formed tunneled biofilms with swimmers, whereas one motile strain of Pseudomonas aeruginosa (ATCC 1592) and one of Bacillus subtilis (strain 168) did not. As the kinetic energy of flagellar motility and the type of biofilm matrix is strain-specific, the authors proposed that only those strains with sufficient flagellar rotational force to break through the biofilm matrix can tunnel effectively. They also point out that those unable to tunnel may have evolved mechanisms of communication such that the flagellar motility of the planktonic recruits is turned off by signals secreted by the sessile members of the community. Although only four strains were tested, I could not help but to notice that the strains that lacked the tunneling phenotype form highly structured biofilms themselves. Theirs is the ‘classical’ biofilm architecture with pillars of cells surrounded by channels, which have been proposed to promote the flow of nutrients and the dispersion of waste products. However, the biofilms formed by B. thuringiensis are confluent and relatively unstructured. Thus, they may use the tunneling as an alternative architectural strategy to maximize biofilm irrigation.

Biofilm swimmers: the good, the bad and the ugly

Perhaps most intriguing is the fact that biofilm tunneling isa double-edged sword. By promoting biofilm irrigation, swimmers also promote the permeation of toxic substances and make the sessile community more susceptible to their deleterious effects. The researchers explain this apparent contradiction within the framework of ecological theory of ‘biological insurance’. The insurance hypothesis states that biodiversity is necessary for greater whole-system stability in a fluctuating environment. The idea is that the more members with specialized roles in a community, the greater the chances (‘insurance’) of having at least one member functioning if all others fail. In tunneled biofilms, the diversity is self-generated as sessile and motile subpopulations, which coexist and cooperate to increase nutrient flow and solute exchange and circulation. The community stability is challenged in adverse environments. Toxic substances, for example, permeate more easily in the tunneled biofilms and can accelerate the death of the sessile community. Yet, the swimmers survive and can disperse to find more favorable conditions, where they can colonize new surfaces and buy new ‘insurance’ for the community.

The ecological implications of the tunneling behavior are even more intriguing when one considers that swimmers can also infiltrate biofilms of other species. B. thuringiensis swimmers infiltrated biofilms formed by both Gram-positive and Gram-negative bacteria. Other flagellated bacilli tested, including four strains isolated from clinical settings, were also able to tunnel into biofilms formed by the Gram-positive pathogen Staphylococcus aureus. Whereas S. aureus biofilms are relatively resistant to benzalkonium chloride, a disinfectant commonly used in hospital and industrial settings, exposing the biofilms to B. thuringiensis swimmers increased their sensitivity to this disinfectant. Furthermore, treatment with a cocktail of two Bacillus swimmers had a synergistic effect and biofilm killing was more pronounced. Thus, infiltrating other biofilms could promote cooperation as well as predation.

An interesting twist of the predatory nature of the tunneling behavior comes when you consider swimmers that can themselves secrete antimicrobial compounds. It is well known that many bacteria, especially the Firmicutes to which Bacillus belongs, secrete molecules that are bactericidal in nature (i.e., they can kill another bacterium). Examples include hydrogen peroxide, bacteriocins, antibiotics, toxins and autolysins, just to name a few. These molecules can be expensive to synthesize and secrete, especially at the high concentrations that are often required to reach a ‘killing’ dose. This is difficult to attain in a liquid environment, where the molecules are rapidly diluted and even flushed away by the fluid motions. However, swimmers could deliver these molecules at the heart of an established biofilm to maximize their action. To test this, the authors genetically engineered a strain of B. thuringiensis expressing lysostaphin, an enzyme that breaks down the cell wall of Gram-positive bacteria like S. aureus. The lysostaphin-producing swimmers literally wiped off the S. aureus biofilm and took over the surface, forming their own biofilm. These stealth swimmers nosedive into the biofilms, boring transient holes and tunnels through them and strategically dropping their ‘bombs’ (aka, toxins, biocides, etc.) at the heart of the biofilm community. Their effect, as the experiments show, is devastating for the targeted biofilm. As the tunneling phenomenon depends exclusively on the rotational force of the flagellum, bacteria can only become refractive to swimmers’ infiltration by shielding themselves from them. One way to do this is by increasing the rigidity of the biofilm matrix. Upregulating the synthesis of matrix components in B. subtilis 168, for example, limited the penetration of the B. thuringiensis swimmers and prevented the formation of tunnels within the biofilm.

Swimmer cells of B thuringiensis expressing the biocide lysostaphin (Bt pLysost) completely wipe out the S. aureus biofilms (in green) and eventually take over the surface and form biofilms (in red). By contrast, cells B. thuringiensis that do not produce the biocide (Bt) or are defective in flagellar motility (Bt ∆fla) had no effect. The numbers in parenthesis in the lower left-hand corner of each panel show biovolume units (μm3), a measure of biofilm biomass. Source.

Is Tunneling Making a Fifth Column?

Biofilms being so relevant in both industrial and clinical settings, one can quickly envision the development of biofilm treatments using bacterial swimmers. A hallmark of the biofilm lifestyle is that cells become more resistant to antimicrobial agents (typically 10- to 1,000-fold more resistant than planktonic cells). However, the application of a few stealth swimmers to an established biofilm sensitizes the biofilm population to antimicrobials, greatly improving the efficacy of commonly used surface disinfectants. Furthermore, when engineered to secrete their own antimicrobial compounds, swimmers become powerful tools for biofilm eradication. Their action could also be targeted to treat specific biofilm infections such as those responsible for many skin, nasal and digestive conditions. Such ‘probiotic’ treatments are unlikely to result in resistant strains and minimize the use and environmental release of chemicals and drugs. These are indeed some holey (holy!) biofilms and, because of them, I will never look at Swiss cheese the same way.