Microbes or Not, Parasites All 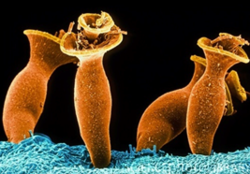 Parasites pose a problem for the semantically-oriented microbiologist. There is no question that unicellular parasites such as Giardia, Plasmodium, or Toxoplasma are microbes, thus we can appropriate them with impunity. But what about parasitic worms? They are clearly not microscopic* and are taxonomically apart from parasitic protist. Yet parasitic protists and metazoans are taught alongside one another in the microbiology classroom and they are often considered in unison by epidemiologists and others. For all their phylogenetic divide and apparent differences, they all share the general traits of a parasitic life style, including undergoing the same steps in pathogenesis (encounter with the host, entry, survival, multiplication, causing damage) and eliciting complex immune responses. 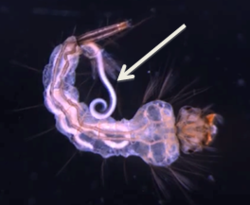 Particularly fascinating is that parasites have evolved intricate mechanisms to survive inside the host and ensure their transmission. Many parasites, whether unicellular or multicellular, go through life cycles that are ultra-baroque in complexity. Consider, for example, the malaria plasmodia’s contortions both within the mosquitoes and the humans. Plasmodia interact with at least three kinds of cells in the insect host and go through some six different stages of differentiation in the human host (including sex). Or ponder about certain flukes that go through as many as four distinct hosts in their life cycle!

So, somewhere along the line, us microbiologists should consider nuzzling up to the metazoan parasites, at least to learn more about them. The Internet is a good place to start, with a number of fine blogs, articles, and other forms of social media that are both informative and exciting. Visiting them is more than just worthwhile. Here is a partial list:

This Week in Parasitism is an ASM-sponsored podcast hosted by Vincent Racaniello and Dickson Despommier where a wide range of issues of parasitism are artfully discussed.

Parasite of the Day presents a parade of unusual and unexpected parasites, from some that are found in tar pits to others that feed on mosquito larvae.

Pretty Protozoa deals with unicellular parasite species in ways that satisfy both the eye and the mind.

*A human tapeworm can reach 10 meters in length, that of a whale, 40 meters.

Moselio Schaechter on April 04, 2013 at 04:00 AM in Pathogens, Protists, Teachers Corner | Permalink