« Whose Planet Is It Anyway? | Main | E. coli Cells Face FACS and Get Back into Shape »

Pictures Considered #3 : How Do You Know There Is a Nucleoid? 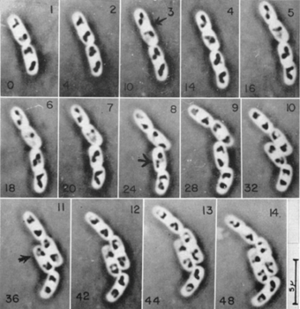 A time-lapse series of E. coli growing on agar containing 20% gelatin. The time is shown in the lower left corner. The contrast in these photos was reversed to make it easier to see the nucleoids. In actuality, the nucleoids look pale and the cytoplasm dark. Source.

What is more commonplace than saying that prokaryotic cells possess a nucleoid? It is implicit in the term prokaryote itself. Still, it was not shown definitively until the 1940s that bacteria and archaea have such differentiated structures made up of condensed DNA. It was the careful work of “bacterial cytologists” (as they were then called) and especially that of the eminent Carl Robinow that furnished convincing evidence for the nucleoid’s existence. Bacterial cells, then and now, were commonly prepared for microscopic examination by fixing with heat and staining with basic dyes. Such dyes stain more intense than acid ones because bacteria are replete with acidic groups from the RNA in the ribosomes. So abundant are these RNAs that these dyes stain the cells uniformly, and the nucleoids are not apparent. To reveal the nucleoids, cells were treated with ribonuclease or with dilute acids that selectively degrade the RNA and then stained. The DNA-containing nucleoids retain the dye and are now easily seen. When thin sections of bacterial cells could be examined under the electron microscope, analogous structures were seen, thus providing additional evidence that bacterial nucleoids exist. And yet, a small lingering doubt remained.Both of these methods looked at chemically treated (“fixed”), dead bacteria. Could this lethal treatment create artifacts regarding the observed “nucleoids”?

The point was settled in 1956 when Mason and Powelson clearly showed nucleoids in living cells. The authors resorted to a simple trick to make the nucleoids visible without dyes. They rightly guessed that the nucleoids and the cytoplasm, having different macromolecule densities, would have different refractive indexes. In order to be able to see this difference under a phase contrast microscope, they simply needed to grow the bacteria in a medium whose refractive index approximated that of the cells themselves. When they did this, nucleoids were evident.

To produce such a medium, these researchers added gelatin, a high molecular weight substance that would not increase the osmotic pressure enough to hinder growth. The nucleoids of living, growing bacteria can now be readily made out under a phase contrast microscope. Being able to see these intriguing structures in living cells removed any residual doubts about their existence.Those “simple” bacteria really do have internal structure! Once again, a definitive picture was worth a thousand suppositions.