« Short Courses for Long-Term Learning | Main | Microbes or Not, Parasites All » 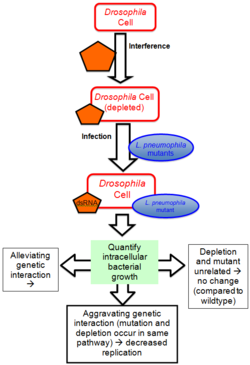 Genetic redundancy, when two genes encode for the same function, is widespread among many organisms. Redundant genes confer an advantage: if one gene is lost, its partner can substitute and the phenotype of the organism will not change. It is unclear how redundancy is maintained during evolution since selection against unneeded genes should eventually wipe out a truly redundant gene. In addition to posing this evolutionary question, redundant genes also pose a tangible problem for researchers. It would be nice if knocking out a single gene resulted in a specific phenotype that revealed the function of the gene. However, if a redundant gene is mutated or otherwise knocked out, its colleague can still perform the function, and no phenotypic effects will be seen. Therefore, assigning a function to redundant genes is often a real challenge.

A recent approach to understanding host-pathogen interactions provides a solution to the problems of redundancy. O’Connor et al. developed a novel genetic screening method, called iMAD for insertional Mutagenesis And Depletion, which enables the investigation of complicated genetic interactions. In iMAD, the bacterial pathogen is mutated and a host function needed to support growth of the pathogen is depleted via RNA interference. The idea is to produce an aggravating genetic interaction, where the combination of defects in host and pathogen produces a stronger phenotype than either would alone. Based on this interplay, it is possible to determine which genes are redundant, as well as their function.

Figure 1A. Defective intracellular growth of L. pneumophila resulting from mutations in Dot/Icm TS genes combined with depletion of host cell proteins associated with the early secretory pathway. Cultured Drosophila cells treated with dsRNA were challenged with a library of L. pneumophila transposon mutants. The relative intracellular growth under each depletion condition was determined by TraSH. Individual genes are clustered into distinct functional groups (red brackets, I to XIV) on the basis of common behavioral patterns across all host conditions examined. 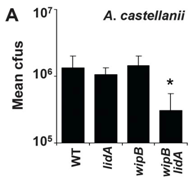 Figure 2A. The ΔwipBΔlidA mutant shows a growth defect in A. castellanii relative to the WT and the corresponding single-deletion strain.

These researchers carried out iMAD with the bacterium Legionella pneumophila, a human respiratory pathogen and parasite of free-living amoebae. The bacterial species was discovered in 1977 after a serious outbreak of pneumonia, later called Legionnaires’ disease, at a convention of the American Legion. L. pneumophila is transmitted through aerosols and can live in most sources of standing water, such as swimming pools, air conditioning, cooling towers, or freshwater ponds.  L. pneumophila produces over 270 effector proteins that are secreted via the Dot/Icm Type IV secretion system. Some of these effector proteins may be involved in the replication of the bacteria inside amoeba or human macrophages. For example, some of them are hypothesized to prevent the delivery of bacteria-containing vacuoles to the bactericidal compound-laden lysosomes. Many of these proteins were suspected to be redundant, making them good candidates for iMAD.

The researchers first created a library of L. pneumophila transposonmutants, as well as a set of Drosophila cells that were depleted of necessary factors by the action of dsRNAs. The Drosophila cells were then infected with the Legionella mutants and their intracellular growth quantified using Transposon Site Hybridization (TraSH). The researchers charted the bacterial mutants against the depleted Drosophila cells and looked for effects on growth of the bacteria, noting advantages, disadvantages, or no change compared to wild-type intracellular growth (Figure 1A). 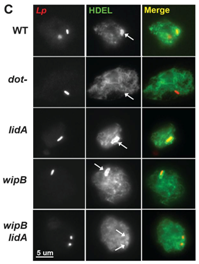 Figure 2C. The ΔwipBΔlidA mutant is defective for recruitment of the ER-targeted fusion protein GFP-HDEL in the amoeba D. discoideum. Amoebas expressing GFP-HDEL were infected with L. pneumophila strains expressing the red fluorescent protein tdTomato for 4 hours, fixed, and visualized by fluorescence microscopy. Arrows point to the bacteria.

The genes that produced similar phenotypes were clustered into groups based on their function (Figure 1F). Each cluster contains proteins that are part of the same complex or that participate in the same process. The lines connecting the clusters indicate redundancy. Mutating one gene in conjunction with a gene from a connecting group resulted in an aggravated genetic interaction, which suggests that the two are redundant. Further redundancies could be inferred from such clustering. For example, if gene wipB from group IX was shown to be redundant with lidA, a gene from XI, then all the genes from IX can be thought to be redundant with all the genes from XI.

The results of iMAD were then confirmed experimentally. In Figure 2A, an aggravated phenotype due to interaction between wipB and lidA is seen in the intracellular growth of the double mutant in the amoeba Acanthamoeba castellanii, compared to wild-type and the single mutants. Fluorescent microscopy (Figure 2C) also showed that the double wipB/lidA knockout was comparatively deficient in recruiting the targeted fluorescent fusion protein GFP-HDEL, which acts as a proxy for endoplasmic reticulum proteins.

Double mutants of L. pneumophila infecting another amoeba host, Dictyostelium discoideum, as well as in macrophages from mouse bone marrow supported the iMAD-derived clustering. However, L. pneumophila grew intracellularly to a different extent in each host, which may reflect differences in the hosts’ secretory pathways. This result supports the idea that L. pneumophila utilizes redundant pathways in order to flourish in different environments. The bacteria are likely to require a somewhat different set of virulence proteins for optimal fitness in each host.

By using iMAD to determine clusters of functionally similar proteins, it has been possible to identify redundancy between different virulence proteins. A limitation of the method is that iMAD requires that a pathogen have convergent biochemical pathways that affect an easily manipulated system of the host. Variations of iMAD should be applicable to a variety of different systems as well. The screen is innovative, interesting, and provides a great deal of data that can easily be confirmed with additional techniques. With iMAD, O’Connor et al. have made it possible to overcome the experimental bottleneck of genetic redundancy and to pinpoint the role of certain bacterial proteins in pathogenesis. I expect that this approach will be widely used in the future with other pathogens and their host cells.

Katrina is a student in the 2013 University of California at San Diego/San Diego State University Integrative Microbiology graduate course.