The Art of Microbial Alchemy 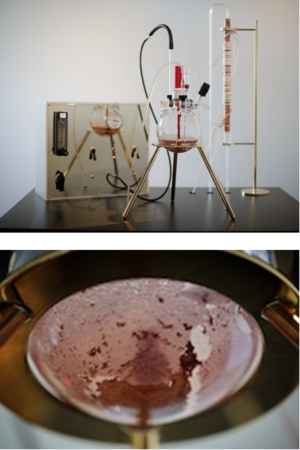 “The Great Work of the Metal Lover” display, by Brown and Kashefi (Michigan State University) (top image). Included is the aesthetically-engaging, original glass chemostat used to grow the microbe, a metal manifold for gas distribution, and a heated glass copper column that removes any traces of oxygen from the gas supply. Cupriavidus biofilms and the gold grains they produce are visible at the bottom of the vessel (bottom image). Source.

In 2001, Kashefi and collaborators published an article in Applied and Environmental Microbiology reporting the surprising finding that several iron-reducing microbes can use gold as an electron acceptor for their respiration. These microbial alchemists included both mesophilic and thermophilic bacteria as well as hyperthermophilic archaea. The beauty of this process is that the oxidized form of gold provided to the microbes, Au(III), is soluble, whereas its reduced form, Au(0), is insoluble. Hence, the microbes respire soluble gold and precipitate it as gold nanoparticles on their outer surface plus, in the case of the Gram-negative bacteria, in the periplasmic space as well. These studies provided the first experimental evidence supporting the role of microbes in the formation of gold deposits in both hydrothermal and cooler environments, thus challenging the prevailing view that gold mineralization was an abiotic process.

Since then, the list of microbes with the ability to precipitate gold has grown. One of them, the Gram-negative bacterium Cupriavidus metallidurans, is an especially abundant component of the so-called gold nugget microbiota, i.e., the bacterial biofilms associated with gold grains. Elio covered this story previously in our blog. This bacterium grows at room temperature and its mechanism for gold biomineralization is one of the best characterized. For this reason, when artist Brown asked Kashefi, both at Michigan State University, to help him design an exhibit that allowed the audience to witness the process of microbial alchemy, Kashefi regarded Cupriavidus asthe microbe of choice.

The greatest challenge was microbiological in nature. They sought a culture system that would produce gold nuggets that were big enough to be seen with the naked eye. This required growing Cupriavidus at high concentrations of gold. But gold, like many other soluble heavy metals lacking biological roles, is toxic to microbes. It traverses the outer membrane of Gram-negative bacteria and then is reductively precipitated by low-potential electron donors present in the periplasmic space, which disrupts cell envelope homeostasis and vital cellular functions. It can also cross the cytoplasmic membrane, triggering oxidative stress and inhibiting the functioning of essential enzymes in the cytoplasm. Cupriavidus detoxifies the Au(III)-complexes that accumulate in its cytoplasm by reductively precipitating them as inert gold-sulfur (Au[I]-S) nanoparticles. Nevertheless, Cupriavidus can tolerate only µM concentrations of Au(III) in solution, and as a result the gold nanoparticles it produces are microscopic. Since the planned display required visible gold nuggets, the team’s microbiologist Kashefi grew Cupriavidus in a chemostat for months, adaptively evolving it to gradually grow at higher concentrations of gold until reaching 1.5 mM, a 30-fold increase from the originally-tolerated 50 µM. 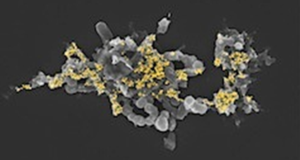 A scanning electron micrograph shows the Cupriavidus cells surrounded by a biofilm matrix with encrusted gold deposits. The deposits were then colorized with gold leaf generated with the very same gold produced by the microbes. Source.

From this undertaking grew the “The Great Work of the Metal Lover”, a display composed of a portable, bench-scale system capable of performing microbial alchemy before an audience. Within this set up, the bacteria grow ‘live’ at room temperature and anaerobically, using hydrogen gas as an electron donor and Au(III) (provided in the medium as gold chloride) as an electron acceptor. As the bacteria respire, they precipitate the soluble gold as colloidal gold particles, whose accumulation turns the growth medium a lovely purple. Beauty is also to be found at the bottom of the culture vessel where purple biofilms and encrusted gold grains accumulate. These biofilms and gold deposits were captured in scanning electron micrographs. For an artistic flourish, they collected gold nuggets from several chemostat cultures, then melted them together to obtain enough material for Brown to create 24K gold leaf. He then enhanced the micrographs by highlighting the gold deposits using the gold precipitated by the microbes themselves. What this scientist-artist duo achieved goes beyond the blending of art and science. This is a visual feast for the intellect and a terrific vehicle for conveying the artistry of the microbiological world to the public. Bravo!

Moselio Schaechter on April 29, 2013 at 04:00 AM in Ecology, Physiology & Genetics, Teachers Corner | Permalink