« TWiM #54: Dueling Injectors and the Microgenderome | Main | Pictures Considered #3 : How Do You Know There Is a Nucleoid? »

Whose Planet Is It Anyway?

This is the title my friend Fred Neidhardt recently used for a talk, and a good question it is. I suppose that most microbiologists and the readers of this blog would split the answer down the middle, the biomass of this planet and the chemical transactions therein being about half microbial, half everything else. However, it’s safe to say that most people, many scientists included, are unaware of the colossal importance of the microbial half, not only in biology and medicine but in geology, meteorology, and in our Earth’s habitability. This state of affairs should not be unexpected, given that we have only became aware of much of this during the last few decades. I lived roughly the first half of my life carrying only a vague notion of the global importance of the microbial world. But now we know, and the word needs to go out. A measure of microbial literacy is required for anyone to understand the workings of our living planet.

(Top) Upper atmospheric oxygen concentration, as a percent of current levels, plotted against geological time. (bottom) Phylogenetic history of life on Earth, scaled to match the oxygen timeline. Note that the origin of the eukaryotes and the subsequent diversification of animals both correspond to periods of increasing atmospheric oxygen. Source.

Through the years, many influential writers have endeavored to convey the global influence of microbes to scientists and non-scientists alike. We can now add to these efforts a new contribution that speaks to scientists of all spheres, but especially to other biologists. It was recently published as a Perspective in PNAS, a most appropriate venue. Entitled Animals in a bacterial world, a new imperative for the life sciences, it is authored by 26 scientists whose names are bracketed by those of Margaret McFall-Ngai and Jennifer Wernergreen. It deals specifically with the role of microbes in the lives of animals. While interactions with plants and the inanimate environment are not included, this seems a fitting focus given the anthropocentric interest of most readers. The other stories are for another day, to include the viruses, the most numerous of all players and which interact with all other living things.

Perhaps you think that in this blog I am preaching to the choir, and admittedly I am. But the sermon provided is superb and deserves sharing. The authors traverse the whole animal kingdom, from humans to fruit flies to shrimp to squid to sponges to protists, with stops in between, offering up fascinating examples of symbiotic relationships, some well known, others less so. I will single out a few that especially caught my fancy. A choanoflagellate, belonging to the oldest of animal phyla, initiates colony formation in response to bacterial signals. (might this speak of how multicellularity arose?). There is a shrimp whose embryos are protected from a fungus by the 2,3-indolinediole made by Alteromonas bacteria on board. A Bacteroides found in the guts of Japanese persons has genes for degrading the seaweeds in their diet, probably acquired from a marine bacterium. An alga protects itself by producing compounds (furanones) that mimic quorum-signaling molecules, thereby blocking communications between invading bacteria. And so on. But don't think for a minute that this is just a parade of astonishing stories. The authors use each example to elucidate a particular category of interactions, thus infusing the work with deeper meaning. Reading this article will sharpen one’s insight. For those enticed to follow up any story, the authors provide a list of well-chosen citations in the supplemental material. 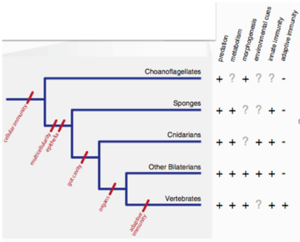 A phylogeny of choanoflagellates and selected animals, annotated to indicate the evolution of characters particularly relevant to interactions with bacteria. (Right) Interactions between bacteria and eukaryotes, corresponding to the phylogeny. Bacteria are prey, sources of metabolites, inducers of development in symbiosis (morphogenesis) and in larval settlement (environmental cues), and activators of immune systems. Source.

I could stop here, but can’t resist listing other exciting material found here that I should have known but didn’t. 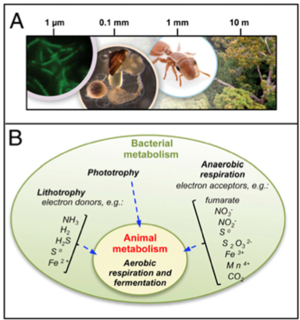 Nested ecological interactions of animals and bacteria and their underlying metabolic bases. (A) A forest canopy insect illustrates the cascading effects of animal-bacterial interactions across multiple spatial scales. Bacterial symbionts (Left), residing in the gut (Center Left), are essential to nutritional success of insect species (Center Right) in tropical forest canopies (Right), where they often make up a majority of animal biomass. (B) Diversity of energy metabolism in bacteria and animals. Animals can ferment and aerobically respire but are unable to perform the vast diversity of other, ecologically vital, energy-harvesting processes. Beyond phototrophy, which they share with plants, bacteria can also contribute to primary production by using inorganic energy sources (lithotrophy) to fix CO2. Animals are directly or indirectly dependent on bacteria for extracting energy and cycling biomolecules, whereas animals actively contribute to bacterial productivity through bioturbation, nutrient provisioning, and as habitats for colonization and shelter. Source.

The authors pose some great questions: How have bacteria facilitated the origin and evolution of animals? How do animals and bacteria affect each other’s genomes? How does normal animal development depend on bacterial partners? How is homeostasis maintained between animals and their symbionts? How can ecological approaches deepen our understanding of the multiple levels of animal–bacterial interaction? They point out that the answers to these questions are relevant to all biologists and beyond.

Progress is undoubtedly being made along the “it’s time to accept that microbes are a big deal” front. The huge effort designed to understand the human microbiome and how it changes between people in different states of health and disease has certainly caught the public’s eye. With the promise of personalized medicine, the microbiome of each person will be part of everyone’s medical history. As the Romans said: Suum cuique (to each his own). The Earth Microbiome Project will follow, although where it will take us is for the future to tell us. We must thank this happy state of affairs in good part to the development of the various ‘ omics’. (By the way, if you find the term –omics grating, what do you think of subsuming them under the term polyomics?)

But for now, the task of changing the general perception of microbes in the scheme of things is still ongoing. Voicing a concern is one thing; delivering the message with such a formidable voice is another. I am grateful to the authors who have made such a commendable effort and there by have contributed to both our understanding and our enjoyment.