A Whiff of Taxonomy – The Phylum Elusimicrobia

If you happen to look, you’ll find that new bacterial phyla spring up with amazing frequency, and that taxonomic names and facts accumulate at a staggering rate. As a public service, we’ll try from time to time to nibble away at this huge salami, slicing off and serving up one unfamiliar phylum at a time. Today it’s the turn of the Elusimicrobia. I admit that I chose them on account of their name. What could be more enticing than an elusive living being? (BTW, the name is derived from the Latin elusus, escaped from capture.) 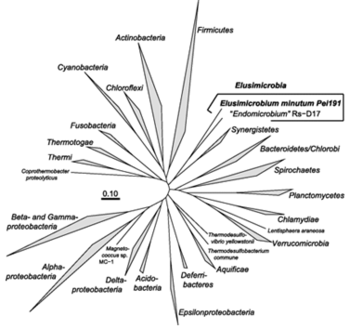 An unrooted maximum-likelihood tree of 280 bacterial genomes, including the two sequenced representatives of the phylum Elusimicrobia, representing the regions of the bacterial domain currently mapped by genome sequences. Source.

This phylum used to be referred to as Termite Group 1, a monophyletic group of bacteria found as endosymbionts of flagellates in the hindguts of termites and other insects. Actually, Elusimicrobia are far less constrained than that, inhabiting also the ocean, soils, and sewage sludge. Since they form a deep branch of the bacterial tree, they are thought of as being quite old. The first one to be cultivated was given the apt name Elusimicrobium minutum. It is minute, an “ultramicrobacterium” only 0.17- 0.3 μm wide and variable in length. For an organism that can be grown in the lab, its genome is a puny 1.64 Mbp. It is a strict anaerobe but can grow on a variety of organic substrates. No pili have been seen on its surface although it is equipped with many of the genes needed for constructing pili. It presents the typical Gram-negative two-membrane system at its surface, but, perhaps due to its extreme thinness, it displays an interesting partitioning of its nucleoid (see the electron micrograph).

The story of the first cultivation of E. minutum bears telling. The authors had prepared culture tubes with what they assumed were sterile filtrates from the larval gut of a scarab, presumably sterilized by passage through 0.2 μm filters. The tubes were stored for future use, but, to their surprise, showed evidence of microbial growth after 3-6 months. Subculturing in “deep agar” yielded small, lens-shaped colonies.

TEM image of longitudinal and radial sections of E. minutum. Note the partition along the major axis between the nucleoid (n) and the ribosome-rich cytoplasm (r). The authors point out that this unusual partition may be due to the cells being limited in thickness. Source.

This phylum is split into two classes, the Elusimicrobiales (to which E. minutum belongs) and the Endomicrobiales. The latter also have small, spindle-shaped cells (0.6 μm in length and 0.3 μm in diameter). They, too, are abundant within the flagellates, which are in turn so plentiful that they can make up 1/3 the body weight of the termites. These protists are essential for degrading the wood cellulose on which the insects feed, but apparently the bacteria are not. Termites treated with antibiotics continue eating wood, unperturbed. So, what else might these elusive bacterial endosymbionts contribute to the partnership? Might their story, once further elucidated, provide yet another absorbing tale of cooperation between insects and their nested endosymbionts?