« The Art of Microbial Alchemy | Main | No Bacterium Is An Island » 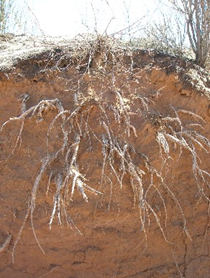 A visible portion of the rhizosphere. Source.

If you had heard of glomalin, you are a better person than I am. Until a couple of months ago I wasn’t aware of its existence, which is close to sinful: it happens to be a very abundant protein in the soil rhizosphere, playing a key role in the soil’s mechanical properties and as repository of soil carbon. Glomalin is a glycoprotein (although the “glyco-“ may be overused here, as biochemical analyses suggest that it contains little in the way of sugars) that binds together silt, sand, or clay soil particles. By ‘supergluing’ the small, loose particles, this gooey protein makes larger granules or aggregates and protect the soils from the eroding forces of winds and water. So, where does glomalin come from? It is thought to be made by fungi, more specifically by members of the arbuscular mycorrhizal fungi, the Glomales (hence the name ‘glomalin’). The hyphae of these fungi synthesize glomalin as part of their stress response. They coat their outer surface with the protein to make a protective waxy coat that keeps the water and nutrients inside the cells. The glomalin coating also makes the fungal strings sticky so they bind soil particles, thus creating an protective ‘armor’ against environmental insults and microbial predators. Most importantly, the fungal “string bags” make soil aggregates. This improves water infiltration and retention in the soils and gas exchange, which makes them more fertile. For more information on glomalin click here. 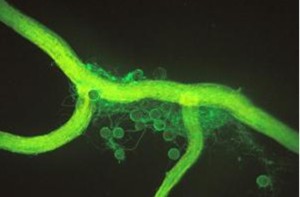 Filaments and spores of an arbuscular mycorrhizal fungus stained with fluorescent antibodies against glomalin. Photo by Sarah Wright. Source.

Some interesting facts about glomalin hint already at its global significance. Glomalin can contribute to as much as 27% of the soil carbon, especially in the temperate zone. By gluing soil particles together, this protein also helps retain other carbon-containing compounds and protects them from decomposing as well. Glomalin easily beats out humic acids, the soluble and insoluble organic substances generated during plant decay that were thought to be the main contributors to soil carbon. It is also extremely tough, lasting an estimated 7 to 42 years, depending on soil conditions. Glomalin was first isolated as recently as 1996 by Sara Wright, a chemist at USDA’s Agricultural Research Service. To extract it, she had to heat the soil at 121°C for one hour at a pH of 8.0. This separate d the glomalin from other gunky material in the soil . But “milder” conditions, using SDS and phenol at room temperature, can now be used. For an article on glomalin chemistry, click here. 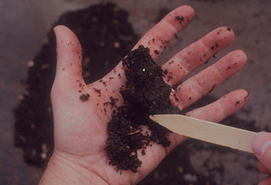 The aggregating effect of glomalin improves the soil fertility, so farmers test the soil texture or “tilth” with their hands. Source.

Finally, glomalin is what gives soils their physical condition, what farmers call its “tilth ” (aka, the “feel” that experienced farmers look for when letting soil flow through their fingers). And although studies on glomalin are in their infancy, there is compelling evidence that it plays a role in enhancing agricultural productivity. It is also a major carbon sink, so we need to start talking about it when discussing global climate change.  Time we learned more about it, right?

Humic acid has strong function to stabilize nitrogen and slow release them to increase the efficiency, also could reaction with Al+, Fe+ such metal iron to release Phosphorus ion the soil to convert them into the form of adoptable for plants. this link: http://www.greenagrosource.com/humic-acid-coating-with-macro-elements-and-formulated-with-microelements.html