No Bacterium Is An Island 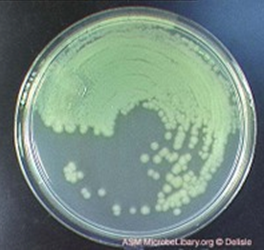 P. aeruginosa colonies showing the characteristic green color that is due to the production of pyocyanin. Source: Gloria Delisle, Microbe Library, ASM.

To paraphrase an old adage, no bacterium is an island. Indeed, bacteria in nature exist as polymicrobial communities where interactions between individuals influence activities of the entire population. This is especially true of pathogenic bacteria, although it has been mostly ignored because we frequently isolate a single species from an infection site and prescribe antibiotic therapy based upon this information. A recent paper by Korgaonkar and coworkers highlights that this practice is somewhat akin to burying ones head in the sand and results in an incomplete picture of the infection dynamics. By studying co-infection systems, these researchers discovered interesting details of how synergy with neighboring organisms can contribute to a pathogen’s virulence. 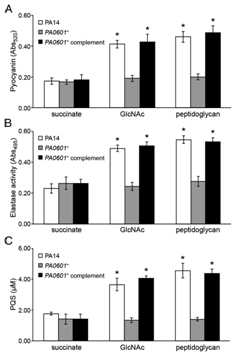 Gene PA0601 is required for NAG and peptidoglycan sensing in P. aeruginosa. (A) Pyocyanin, (B) elastase, and (C) PQS levels produced by WT and mutant P. aeruginosa in the presence of no inducer (succinate), NAG, or peptidoglycan. Source.

Pseudomonas aeruginosa is a Gram-negative opportunistic pathogen that often colonizes chronic wounds along with other Gram-positive bacteria. Together, they exert a synergistic effect. Previous work from that laboratory found that production of the virulence factor pyocyanin (the pigment that gives the colonies of this organism their characteristic green color) is enhanced when P. aeruginosa is exposed to cell wall fragments shed by co-infecting Gram-positive bacteria. In fact, the N-acetylglucosamine (NAG) moiety of the cell wall’s peptidoglycan was shown to be necessary and sufficient for enhanced pyocyanin formation. To study the genetics of this interesting phenomenon, the researchers first isolated a mutant that produces normal levels of pyocyanin in the absence of NAG and not more pyocyanin in its presence. Using transposon inactivation, they found such a mutant with an insertion at gene PA0601. This gene encodes a two-component response regulator with sequence homology to the Lux family of quorum sensing regulators. Once again, the themes of virulence and quorum sensing converge.

Several other virulence factors of P. aeruginosa are co-regulated with pyocyanin production, including the extracellular protease elastase. As expected, in the wild type but not in the PA0601 mutant, elastase production was also enhanced by NAG and peptidoglycan. The autoinducer for this kind of quorum sensing is the Pseudomonas Quinolone Signal (PQS or 2-heptyl-3-hydroxy-4(1H)-quinolone). PQS is known to be an anti-staphylococcal agent, and so are pyocyanin and elastase. The researchers hypothesized that, when stimulated by NAG, the increase in the levels of pyocyanin and elastase is due to enhanced production of PQS. Sure enough, the level of PQS was threefold higher in cells grown with NAG and peptidoglycan. It all fits: quorum sensing becomes a surveillance mechanism for Pseudomonas to detect its bacterial neighbors and respond by producing antimicrobial factors.

Does Quorum Sensing Matter In Infection?

The authors turned to an in vivo model of infection, namely infected Drosophila flies. Here, ingested P. aeruginosa colonize the flies’ crop, eventually causing their death. With wild type (WT) bacteria, 50% of the flies died by 2 days. Flies fed the PA0601 mutant lived significantly longer (50% were still alive by 4 days). The PA0601 mutant was able to colonize and persist in the fly’s crop, so that was not the reason for its decreased lethality. The Drosophila crop is colonized by large numbers of Gram-positive bacteria and thus the authors hypothesized that it would naturally contain peptidoglycan shed by its Gram-positive population. To test this, flies were fed a mixture of antibiotics (ampicillin, vancomycin, and erythromycin) designed to kill the native Gram-positive but not Gram-negative iota. Cultures made from the crop showed that this treatment was effective. Killing was now delayed whether the flies were infected with the WT or the PA0601 mutant. Equally tantalizing is the finding that peptidoglycan sensing resulted in a decrease of the size of the Gram-positive biota. Indeed, the Gram-positive population within the fly crop was reduced about 1,000-fold when infected with WT but much less so in flies that had ingested the PA0601 mutant. So, P. aeruginosa surveys the microbial community in its vicinity and both degrades its competitors and enhances its virulence to the host.

In order to expand these observations to a vertebrate system, the authors turned to a murine chronic wound infection model. Surgical wounds infected with monocultures of P. aeruginosa, the PA6061 mutant, or Staphylococcus aureus, showed about the same final growth yields. Coinfections of WT P. aeruginosa and S. aureus initiated using a 1:1 ratio were highly enriched for P. aeruginosa after four days (the median value for the ratio of the two was 110:1). On the other hand, co-culture infections of the PA0601 mutant were enriched for S. aureus. Counts of P. aeruginosa in wild type and the PA6061 mutant co-cultures did not change significantly, indicating that the enhanced S. aureus numbers were not due to increased persistence of WT P. aeruginosa but rather to its ability to recognize peptidoglycan and thus increase production of antimicrobials during co-culture in vivo.

The results presented in this paper clearly show that in a polymicrobial environment, commensal Gram-positive bacteria can potentiate the virulence of a Gram-negative opportunistic pathogen by shedding cell wall fragments, which enhances virulence factor production via a QS system. As an aside, it’s curious that both some bacteria and the host recognize the presence of invading bacteria through their shedding of cell wall fragments. But then, peptidoglycan (or its fragments) is a good choice for a calling card, being that this compound is quite unique in biochemistry and is restricted to bacteria.

These findings suggest that therapeutic strategies targeting Gram-positive bacteria may be helpful for treating P. aeruginosa-dominated polymicrobial infections, including those of chronic wounds. Or, to say the least, it emphasizes that the polymicrobial nature of bacterial infections must always be carefully considered.