« A Whiff of Taxonomy – The Phylum Elusimicrobia | Main | Talmudic Question #99 »

Ceteris paribus, the more prey, the better the hunting. The successful fisherman fishes where the fish are, the skillful pride of lions hunts where the wildebeest gather, and savvy phage predators hang out where the bacteria are. Such bacteria-rich locations include the protective mucus layer formed by animals to protect their vulnerable exposed surfaces. Bacteria—symbionts and pathogens alike—find mucus hospitable; it offers them food and a structured environment. The congregation of bacteria makes mucus a good place for phages to hunt their prey, and some have evolved to exploit this resource. Thus, while looking after their own interests, phages here also serve as an antimicrobial defense for their metazoan host.

The rule of thumb is that phage virions outnumber bacteria in most environments by roughly ten-to-one. Barr et al. recently reported that this ratio is increased more than four-fold in mucus sampled from a wide range of metazoans, from corals to humans. Unlike chemotactic bacteria, phages can’t actively move towards mucus. That there are more phages in mucus than in the adjacent milieu implies that when good fortune and diffusion brings them to the mucus layer, they adhere and stick around. The obvious question is how. 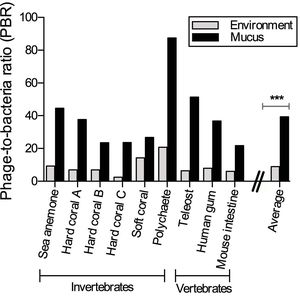 Figure 2. Samples of mucus were collected from diverse metazoans, along with samples from the adjacent milieu. Both bacteria and presumed phages (virus-like particles) were counted by epifluorescence microscopy and the phage-to-bacteria ratios (PBRs) calculated. On average, PBRs for mucosal surfaces were 4.4-fold greater than for the adjacent environment. Source.

An Introduction to Mucus

What exactly is this mucus”? A complex viscous gemisch. Its main macromolecular components are mucins, giant glycoproteins up to 103–106 kDa. In structure, these proteins are often likened to a “bottle brush.” The central rod is formed by a long “worm-like” polypeptide chain composed of hydrophobic regions that alternate with domains rich in serine and threonine residues. Those serine and threonine residues bear O-linked glycan chains that extend outward 0.5–5 nm forming the “brush” bristles. Mucus is sticky, so sticky that numerous organisms use it to adhere to surfaces or entrap food. Nevertheless, virions diffuse through it unimpeded. Not only are they small enough to slip through the mucin meshwork, but their surface is so densely coated with charged amino acid groups that they escape the hydrophobic binding that traps other particles their size. Something else must be responsible for the increased number of phages in the sampled mucus. Could it be some mechanism by which phages adhere to mucus?

A New Function for the Hoc Protein

These researchers started to track down this mechanism. Given the structure of mucin proteins, they postulated that the exposed glycan chains were likely to be key factors. In many different organisms, the binding of immunoglobulin-like (Ig-like) proteins to specific carbohydrates underlies cell adhesion processes. Surprisingly, about 25% of the tailed phages whose genomes have been sequenced contain Ig-like domains, all within structural proteins where they can be exposed on the surface of the virion. This led to a testable hypothesis: phage Ig-like domains bind to the mucin glycans, thus retarding phage diffusion and increasing phage residence time within the bacteria-rich mucus layer.

T4 phage was the obvious choice for investigating this in vitro. This phage assembles 155 copies of the Hoc (Highly antigenic outer capsid) protein in its capsid, each copy of which contains four immunoglobulin-like (Ig-like) domains that are exposed to the environment (see figure 1). Hoc’s function is unknown; removing the Hoc gene does not affect infectivity or replication under lab conditions. It was thought that perhaps Hoc enhances adherence to host cells in the natural environment. Indeed it might, but Barr and colleagues found that Hoc can play another role.

Comparing wildtype Hoc+ T4 with a Hoc– mutant, they found that the Hoc+ T4 and only the Hoc+ T4 bound selectively to mucin-coated agar plates. Would this binding be sufficient to retard phage movement through the mucus layer? To address this, they used multiple particle tracking to measure the diffusivity of fluorescently labeled T4 phage. They found that Hoc– T4 phage diffused through a 1% (w/v) mucin suspension at the same rate as through buffer, while the mucin decreased the diffusion rate for Hoc+ T4 eight-fold.

This is consistent with their hypothesis, but additional evidence was needed to support the view that the phages bind specifically to the mucin glycans. For this, they assayed the binding of Hoc+ and Hoc– T4 phage to each of 610 glycan targets in printed mammalian glycan microarrays. Only the Hoc+ T4 phages bound to any of those glycans. They bound weakly to a large number of diverse glycans, especially to O-linked glycan residues found in mucin glycoproteins.

While this is interesting, from our metazoan point of view the number one question is whether these adherent phages actually protect us from invasion by bacterial pathogens. Our mucosal surfaces are our most vulnerable zones, the main point of entry for infectious agents. To explore this possibility, Barr and colleagues set up an in vitro model system with various tissue culture cells, some mucus-producing and some not. Initial experiments determined that Hoc+ T4, but not Hoc– T4, adhered to the two types of mucus-producing tissue culture (TC) cells tested (T84, a human colon epithelial cell line, and A549, a human lung epithelial cell line). Even Hoc+ T4 did not adhere to these TC cells if the mucus was first removed with a mucolytic agent (N-acetyl-L-cysteine). Furthermore, Hoc+ T4 did not adhere to non-mucus-producing mutant cells derived from the A549 cell line, again indicating that the phage binds to the mucus, rather than to some other cell surface component. Next these researchers used their in vitro model to demonstrate that adherent phages reduced bacterial colonization of mucus-producing TC cells. For these experiments, monolayers of TC cells, both mucus-producing and non-mucus-producing, were incubated with Hoc+ T4 phages for 30 min, washed to remove the phages and then incubated for 4 h with E. coli. The cells were scraped from the plates, fluorescently stained, and the attached phages and bacteria counted (see figure 2). The phage pretreatment significantly protected the mucus-producing cells from E. coli colonization. This protection mattered, as similar experiments showed that pretreatment with phages significantly decreased cell death.

Those experiments measured how well the phages protected the TC cells during a 4 h incubation with E. coli. Under their conditions, 4 h was long enough for the T4 phages to complete multiple cycles of replication, thereby increasing in number by several orders of magnitude. Repeating the experiments with Hoc+ T4 phages that could not replicate due to amber mutations in essential genes demonstrated that this replication was essential for effective protection of the TC cells.

The observations reported here could be the tip of an unexplored immunological iceberg. Future experiments are needed to determine if phages indeed protect mucosal surfaces in vivo, and if so, how significant this protection might be. Of particular interest is the potential for rapid adaptation of this non-host-derived immunity. Ig-like domains, such as those in Hoc, can accommodate large sequence variation (potentially >1013 variants), and a mechanism for rapidly generating such variation is known to be present in phages in the human gut. That mechanism employs the diversity generating retroelements (DGRs) first recognized in Bordetella phage (see our 2008 blog post). Moreover, continual sloughing of the mucus layer means that even adherent phage populations turnover quickly, thus facilitating rapid phage response to new bacterial invaders. 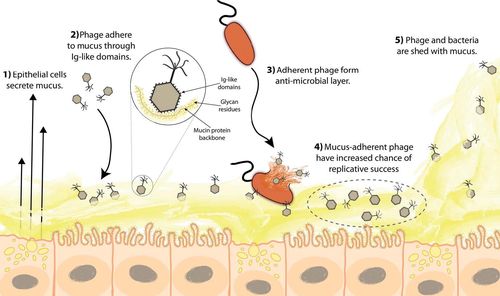 Figure 4. The Bacteriophage Adherence to Mucus (BAM) model.1) Mucus is produced and secreted by the underlying epithelium. 2) Phage bind variable glycan residues displayed on mucin glycoproteins via variable capsid proteins (e.g., Ig-like domains). 3) Phage adherence creates an antimicrobial layer that reduces bacterial attachment to and colonization of the mucus, which in turn lessens epithelium cell death. 4) Mucus-adherent phage are more likely to encounter bacterial hosts, thus are under positive selection for capsid proteins that enable them to remain in the mucus layer. 5) Continual sloughing of the outer mucus provides a dynamic mucosal environment. Source.

As noted in Elio’s recent review of a most pertinent paper, the word is getting out: symbioses with microbes are a hallmark of successful metazoans. But we are just beginning to learn how we go about selecting our microbial associates, how we distinguish symbionts from pathogens, how we destroy the latter while welcoming the former. Mucosal surfaces are key sites for this interplay. In the eyes of Barr and colleagues, a major participant in this coalition has been overlooked until now—a partner on our side. They see their research as the first demonstration of a phage-metazoan symbiosis. With this development, the story of microbial-metazoan symbioses just became a whole lot more complicated.