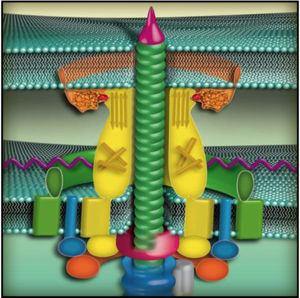 Schematic diagram of a type VI secretion system by Y. M. Cully, C. Cambillau, and E. Cascales. The lower bilayer membrane is the attacker’s, the upper one the host’s. Notice the complex structure of the Type VI secretory apparatus. Source.

Microbial ecology may be a young field but it is well understood already that there is a broad spectrum of interactions between bacterial species, ranging from cooperative to competitive. In a recent paper researchers from John Mekalanos’ lab further characterized a recently discovered mechanism for inter-cell communication. This system, called the Type VI secretion system (T6SS), is a multi-protein complex native to many bacterial strains and structurally and functionally similar to a bacteriophage tail. The T6SS system is unique in that it is used as a weapon for injecting toxic proteins into the cytoplasm not only of animal host cells but also of neighboring bacterial cells by propelling its components through the neighbors’ membrane. The toxic effector proteins, Tse1 and Tse3, are peptidoglycan-degrading enzymes that can cause cell lysis in the absence of antitoxin proteins. For reviews, click here and here.

To elucidate how and when a cell decides to inject a neighboring cell with its T6SS, these workers studied its behavior in Vibrio cholerae and Pseudomonas aeruginosa. In V. cholerae, the T6SS seems to shoot off at random, constantly showing up in different areas on the cell, which endows it with high pathogenicity and with the ability to kill off many other species of cells. In this light, V. cholerae can be seen as a sort of Yosemite Sam, a character renowned for his excessive and poorly aimed shooting. The analogy to this character and to Batman (see below) was thought up by Robert Cooper and appeared in his fine blog at Science 2.0.

On the other hand, in P. aeruginosa, T6SS often shows up in a cell only in one place exactly corresponding to the T6SS activity of an adjacent cell, something the group dubbed as “dueling activity.” Instead of the haphazard random firing of V. cholerae, P. aeruginosa seems to duel with other nearby cells, so that when one cell fires its T6SS, the other cell would fire right back in the same spot. Thus, P. aeruginosa has a more sophisticated T6SS response system that will fire only in a spatially-targeted fashion and only in response to being attacked first. Because of this more refined offensive strategy (at least with respect to Vibrio), P. aeruginosa can be likened to Batman, a figure that classically attacks aggressors only. The paper unknowingly continues this analogy by showing that P. aeruginosa will happily coexist with non-aggressive cells even though it has the capability to destroy them, just like our hero Batman. 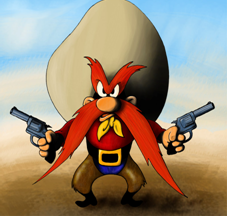 The study began by characterizing the “Yosemite Sam” firing of the wild-type Vibrio cholerae. To appreciate the chaotic firing nature of the aggressive V. cholerae, we suggest watching the paper’s video abstract. The group then focused on P. aeruginosa alone. They noticed that one sister cell would fire its T6SS, the neighboring cell would fire back after a short delay. However, the P. aeruginosa makes an antitoxin to the injected toxic protein, so it can survive attacks from sister cells. 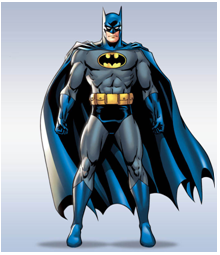 To test if Pseudomonas is simply a cold-blooded killer, these researchers mixed and grew it together with a non-aggressive E. coli (-T6SS) strain. Through microscopy, they showed that E. coli is killed very slowly, if at all, by the righteous P. aeruginosa. In the same vein, they created a non-aggressive V. cholerae strain by knocking out the T6SS, and mixing it with P. aeruginosa. This knockout proved to be very beneficial in that these mutants were killed at rates ~100 times slower than the wild type vibrios. Its T6SS system is so specific that even when P. aeruginosa was mixed with both the passive vibrio mutants and the Yosemite Sam wild-type vibrios, the aggressive strain is killed but the cooperative strain is spared. Pseudomonas is clearly Batman-like, showing mercy to those who do it no harm.

Lastly, the group made sure that this system was not specific to V. cholerae by growing T6SS+ Acinetobacter baylyi cells together with P. aeruginosa. Once again the P. aeruginosa effectively and efficiently killed the aggressive A. baylyi, proving that it is capable of responding to a variety of T6SS+ organisms. In short, P. aeruginosa can carry out coordinated counter-attacks to a spectrum of aggressive T6SS+ cells. The attack is spatially localized and used as a response to aggression. It is also parsimonious, in that P. aeruginosa saves its ammo solely for counterattacks, as if using its powers only to subdue aggressors.

An Offensive Weapon Can Be Defensive

There are several important conclusions to draw from these different uses of the T6SS system. Essentially, as the authors state “V. cholerae uses the [T6SS] as an offensive weapon, whereas P. aeruginosa uses the organelle as a defensive weapon.” This has a strong evolutionary implication since, as the paper states, biofilms composed of diverse but cooperative bacterial species likely have more growth potential than biofilms composed of a single bacterial species. See here and here. Thus, P. aeruginosa’s ability to discriminate between friend and foe may evolutionarily reflect the adage “don’t bite the hand that feeds you.” This suggests that P. aeruginosa has developed a way to coexist with other bacterial species as long as they are not aggressive. On the other hand, its ability to counterattack an aggressive bacterial species demonstrates a “tit-for-tat” evolutionary strategy. If you are a non-aggressive bacterium, P. aeruginosa is a great choice to create a symbiotic relationship with. It would be easy to create a biofilm with the P. aeruginosa and provide it with nutrients in exchange for protection from predatory bacteria like V. cholerae. And you thought that bacteria live a simple life.