Fine Reading: The gut microbiota of insects – diversity in structure and function

Now that the mammalian intestinal microbiome has been promoted to organ status, might not such stately respectability be granted to the gut microbiota of other metazoans? If looking for a worthy candidate for such recognition, one could not do better than to consider the varied communities dwelling in the guts of insects. A recent review by Engel and Moran points out that beneficial intestinal microbes here: upgrade nutrient-poor diets, aid digestion of recalcitrant food components, protect from predators, parasites and pathogens, contribute to inter- and intraspecific communication, affect efficiency as disease vectors, and govern mating and reproductive systems. Microbes, it is clear, have contributed mightily to insect success. 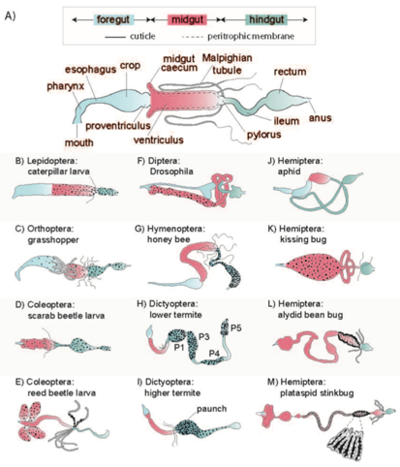 A. Generalized gut structure of insects. The foregut and hindgut are lined by a cuticle layer (black line), the midgut secretes a peritrophic matrix (dashed line). B-M: Gut structures of insects from different orders. If not specifically indicated, the gut of an adult insect is shown. Stipples depict the predominant localization of the gut bacteria. For plataspid stinkbug, the magnification shows bacteria localized in the midgut crypts. Source.

The microbial landscape of the insect gut microbiome is much different from that of mammals. The great diversity of insects is reflected in their digestive tracts that also differ greatly in anatomy and physiology, and thus accommodate microbiotas that vary in composition and number. The total number of bacteria present range from 109 per honey bee, to 105 in a fruit fly, to negligible numbers in the sap-feeders, the latter often carrying instead an abundance of bacterial endosymbionts. Pick any individual insect and likely it will have fewer species in its gut than you do, although there are exceptions. Perhaps the most diverse communities among the insects are those in the termites, which are teeming with bacteria and protists. The 19th century American paleontologist and biologist Joseph Leidy observed that when one ruptures the intestine of a termite, myriads of the living occupants escape, reminding one of the turning out of a multitude of persons from the door of a crowded meeting-house.

The authors of this review article serve as expert guides to the anatomic complexity of the insect digestive system—with it distinguishable fore-, mid-, and hindgut. Each molt brings marked changes that disrupt or discard the microbiota, thus calling for extensive re-seeding. The routes of acquisition of these varied partners are likewise diverse. Some insects tend their eggs, thus facilitating vertical transmission, while the social insects have opportunities for transmission within the group. Both of these routes favor the development of gut communities’ characteristic of that species. The interests of the Moran lab being centered on bacterial endosymbionts, those associated with the gut receive considerable attention and serve to contrast with the free-living members of the microbiome.

Bacteria arriving by any route encounter powerful host defensive mechanisms. These barriers vary among the different groups of insects, and so do the bacterial strategies for surmounting them. As expected, the mighty subject of insect innate immunity, which is so conducive to understanding its equivalent in mammals, is treated here in detail. So are nutritional symbioses, the role of the microbes in insect development and physiology, and, especially thought provoking, their participation in intraspecific and interspecific communication. But be prepared for a specialized language: you will encounter terms such as proctodeal trophallaxis (anus-to anus feeding), peritrophic matrix (a layer of chitin fibrils that protects the intestinal epithelium), paratransgenesis (the elimination of a pathogen via the introduction of a symbiont) and others that may prompt a Google search.

This review will acquaint you with what we currently know about the great variety of bacteria found in the guts of insects, and at the same time will convince you that much remains to be explored before we have the grand picture of the inner life in insects. This is to be expected, insects being the most varied and abundant animal clade of all.