Pictures Considered #5 : The Birth of the FtsZ Ring 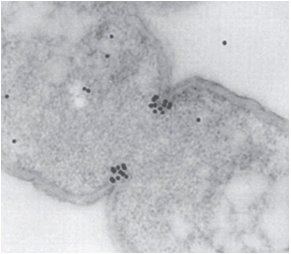 Thin section of an E. coli cell in the process of di­vi­ding showing gold-labeled anti-FtsZ-anti­body particles located at the septum. Source

The first cytoskeletal protein discovered in bacteria was FtsZ, the tubulin-like maker of the contractile ring involved in cell division of most bacteria. It was found by investi­ga­ting one of a series of Fts (for "Filamenting temperature sensitive") conditional mutants, first constructed by Y. Hi­rota, A. Ryter and F. Jacob in the 1960's. These mutants do not divide but grew as filaments at a non-permissive tem­perature. Joe Lutkenhaus became acquainted with such mutants in the late 1970's while a postdoc in Willie Dona­chie's lab in Edinburgh. On his own, he continued studying such mutants and ended up purifying the FtsZ protein. Once he had it on hand, he made antibodies to it and, in an inspired moment, decided to look at the cellular loca­lization of FtsZ using gold-labeled antibodies. What he found was of historic importance: although the antibody-carrying parti­cles were distributed randomly in sections of most of the cells, in those cells that had initiated their septum and were engaged in cell division, the gold particles were located in a ring-shaped structure at the division septum. What this means was clearly stated in the paper: "… we propose that FtsZ self-assembles into a ring structure on the cytoplasmic surface of the inner mem­brane where septation will occur and that is the first step in the division process. We also suggest that the initiation of FtsZ into a ring structure is the rate-limiting step for septation and occurs when the amount of FtsZ is sufficient." One picture is all it took.

Posted on June 06, 2013 at 04:00 AM in Physiology & Genetics, Pictures Considered, Teachers Corner | Permalink