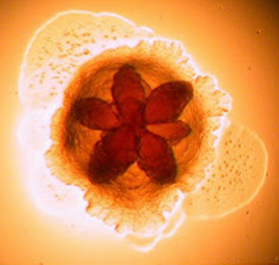 The production and secretion of protein toxins (exotoxins) is a most common strategy among microbial pathogens. Yet, oddly, these virulence factors are fairly rare among oral pathogens, with one exception, the Gram-negative Aggregatibacter actinomycetemcomitans. For readers with an interest in taxonomy, this microbe was originally named Actinobacillus actinomycetemcomitans and later reclassified and renamed (you known taxonomists...). The new genus name refers to the microbe’s tendency to aggregate with other bacteria in the dental plaque, whereas the equally bombastic species name speaks to the fact that it was isolated together with the common mouth-dwelling Actinomyces. This microbe makes pretty colonies that look like a flower. But, esthetics aside, this microbe has attributes that warrant special attention. It is found in about one third of the human population and it is involved in a particularly rapid progressive form of adolescent periodontal disease, common in those of African descent. It has also been implicated in infective endocarditis and other deep serious infections. Viable cells of A. actinomycetemcomitans cellshave been identified in atherosclerotic plaque. This is, without a doubt, a microbe that knows how to cause trouble. But what makes it so prominent in the oral environment and such a successful pathogen?

The Toxins of A. actinomycetemcomitans

It has been known for quite some time that A. actinomycetemcomitans makes two toxins, the leucotoxin (LtxA) and the cytolethal distending toxin (CDT), to trigger disease. These toxins are proteins that the microbe secretes and whose action is directly responsible for the aggressive form of periodontitis. The microbe also secretes a third toxin, the cytotoxin CagE. However, we know little about its mechanism of action and role in pathogenesis, except that it shares homology to a carcinogenic factor secreted by another human pathogen, Helicobacter pylori. 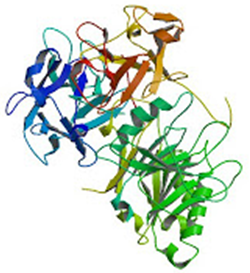 Fig. 2. The crystal structure of CDT at 2.4 Å resolution. Source.

The leucotoxin LtxA is a lipoprotein belonging to the RTX family of toxins that are found in various Gram-negative bacteria. RTX stands for “repeat in toxin” and alludes to the many glycine-aspartate repeats contained in the protein. The gene encoding LtxA is part of the ltxCABD operon, which encodes the toxin and the proteins that control its expression and activation, and, partly, its secretion. I say “partly” because the secretion of LtxA is a complex process that involves the formation of microvesicles, the functioning of some transportation systems, the action of proteins involved in the integrity of the cell envelope, and the availability of iron. In addition, the secretion of the toxin does not follow the same path in all the strains. Some strains of A. actinomycetemcomitans, especially those directly subcultured from oral biofilms, produce rough, adherent colonies with cells containing abundant fimbriae appendages. The rough strains do not fully release the toxin, which remains bound to the cell envelope. By contrast, strains that produce smooth colonies secrete the toxin to the external milieu.

The levels of LtxA expression also differ among strains. The highest levels of production have been reported for strain JP2 that carries a deletion of 530 bp in the toxin promoter. This strain also appears to have a marked ethnic predilection, causing aggressive periodontitis especially among North Africans and African-Americans. At the core of this specificity may be the ability of LtxA to bind to integrin LFA1, the transmembrane receptor of cells of the immune system that mediates cell attachment and signaling.Its binding induces the formation of pores on the membrane of monocytes, lymphocytes, neutrophils, and other myeloid and lymphoid cells. Eventually, this leads to apoptosis and thus compromises the immune response of the host during infection. 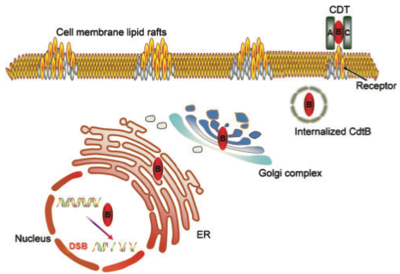 Fig. 3. CDT uptake and intracellular transport in mammalian cells. The CDT heterotrimeric holotoxin, consisting of the CdtA, CdtB and CdtC protein subunits, binds to a cell membrane receptor located within lipid rafts. It is rapidly taken up by endocytosis of the active CdtB protein subunit in a clathrin-coated pit. The toxin is then transported via the Golgi complex and endoplasmic reticulum (ER)into the nucleus using nuclear localization signals. This results in DNA double strand breaks (DSB). Source.

The second toxin produced by A. actinomycetemcomitans or CDT is similar to cytolethal distending toxins produced by other pathogens such as E. coli and Campylobacter. This type of toxin blocks cell division and causes apoptosis in a variety of eukaryotic cells. They are heterotrimeric proteins composed of three subunits (CdtA, CdtB and CdtC). The biological activity resides in CdtB, whereas CdtA’s and CdtC’s role is to anchor CdtB to the membrane. CdtC is also believed to function as a chaperone of CdtB. The CdtB subunit fits well the classical definition of genotoxin, i. e., it damages DNA thanks to its phosphatase and DNA nuclease activities, which have a similar effect on DNA as ionizing radiation. The toxin’s action eventually leads to distention of the cytoplasm and the nucleus, phenomena that often precede apoptosis. As with LtxA, CDT can target various cells of the immune system, e. g., lymphocytes, but seems to have a special predilection for the oral epithelium. 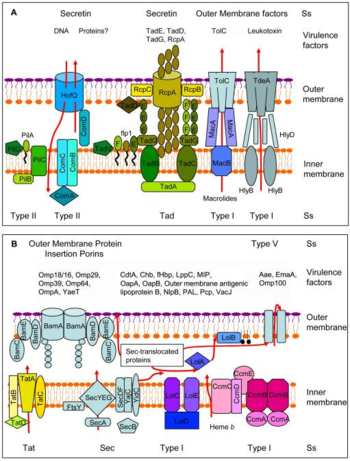 The Arsenal Of A Pathogen Revealed

In addition to the LtxA and CDT toxins, A. actinomycetemcomitans secretes nearly 200 proteins using various transport mechanisms. This arsenal of proteins is believed to play a role in the immunopathology of juvenile periodontitis and some may help the microbe survive in the periodontium. This is indeed an impressive display of potential virulence factors that highlight the complexity of this pathogen and the etiology behind the diseases it causes. Besides the microbiological challenges, it is worth emphasizing that oral infections are the most common of all microbial diseases in humans. Thus, they deserve more attention.

This article, which appeared in Pedro’s blog Microbios, is translated from the original with some modifications.

Elio adds a comment: Soon after reading this article, I saw my dentist, a recent graduate from dental school. I asked him if he knew of A. actinomycetemcomitans. To my pleasure, he told me that it was emphasized in school but that, in self-defense, it was referred to as “AA.”

Pedro is Professor of Microbiology at the University of Murcia, Spain.