In contrast to air, the ocean represents a benign environment for most living organisms: With the exception of some harsh marine environments, the means of physicochemical properties are generally not far off the optimum of most species and their fluctuations are moderate, rarely exceeding biological tolerance limits. So begins a review by Wahl and colleagues on the virtues of marine waters as a habitat. I can’t say that I had given this much thought. Anticipating interesting insights, I read on: As a consequence, insulating coatings of the epidermis such as hair, feathers, wax are not required in the marine realm. No big surprises there, but the implications of it, as explored by these authors, are vast and far-reaching. 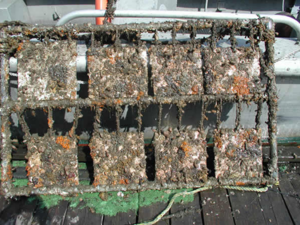 Figure 1. Biofouling coating test. 12 x 12 inch test panels exposed at the intake of a power plant for 1 year. Some of these panels were uncoated controls, others were coated with various nontoxic compounds intended to inhibit biological fouling. Minor benefits, if any, can be attributed to the coatings. Score: 1 for nature, 0 for coatings! Source.

Lacking such protective barriers, the body surfaces of marine organisms more intimately engage with the environment and participate in actively acquiring essential nutrients, gases, light, and information. Bathed continually in seawater, these surfaces invite colonization by microbial biofilms, a “second skin.” Such living coverings tend to be thicker and more permanent among aquatic organisms than terrestrial ones (especially if you take a shower every day). While such biofilms can be essential partners, the wrong participants or excessive growth can be detrimental, leading, for instance, to fouling. We associate 'fouling' with biofilms that interfere with our activities, such as the communities that form on the hulls of ships, on membranes in desalination plants, or on catheters. But fish, algae, and other ocean dwellers also are beset by fouling that can reduce exchanges with their environment, alter buoyancy, impede motility, influence feeding, or even interfere with mating. Numerous factors come into play to influence the density of the epibionts colonizing animals and algae.

There is a wealth of information about other pertinent ecological processes as well, including how the epibiont biofilms contribute to, or protect against, infections of their partners. Biofilms can also modulate the rate of settling of larvae of sponges, corals, tunicates, and other animals, thereby either facilitating or inhibiting their colonization of the benthos. This is a matter of practical importance to those, for example, seeking to restore ravaged coral reefs. Also included in this review are bacterial epibionts who have moved inside, now to live as essential endosymbionts. Examples known to readers of this blog include the Hawaiian Bobtail Squid and the gutless worms (oligochaetes), where the bacteria act as both gut and lung. 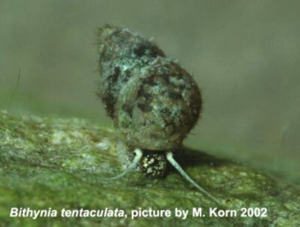 Figure 2. Marine biofilms are lunch for a snail biofilm grazer (itself coated with biofilms). Source.

Studying the varied aspects of this business makes serious technical demands. Traditional methods of sampling tend to be destructive, i.e., they require tearing away a chunk of the biofilm, but modern imaging and analysis techniques allow avoiding such drastic steps. What complicates experiments is that biofilms are far from static: they change the surface on which they’re attached, alter its wettability, consistency, and other physical properties. Their very presence alters the system being observed, for example, by modifying the chemicals exuded by the underlying organism and by influencing the adhesion of other organisms.

The authors had no trouble convincing me that biofilms play a huge role in the physiology, ecology, and evolution of their hosts. Thinking beyond the marine environment, biofilms cover practically all wet surfaces everywhere. How large is this dermatological biomass? One can only guess, but it is colossal. Among the estimated 1030 or so bacteria on Earth, are the majority planktonic or sessile? When we asked this as Talmudic Question # 59, most readers favored the latter. Many of these organisms are attached to dead material, such as marine snow, others to living things. That brings to mind a new Talmudic Question: Are more marine microbes attached to living organisms or to inanimate material? Once ensconced, biofilms grow in size, going from a small aggregate of cells to huge masses that can obliterate the lumen of big pipes. So, another new Talmudic Question comes to mind: How many cells does it take to make a biofilm? Would you call a single attached cell a biofilm?