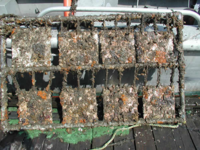 by Elio | In contrast to air, the ocean represents a benign environment for most living organisms: With the exception of some harsh marine environments, the means of physicochemical properties are generally not far off the optimum of most species and their fluctuations are moderate, rarely exceeding biological tolerance limits. So begins a review… Read more →

by Marco Allemann | Members of the bacterial phylum Planctomycetes (click here and here) inhabit a wide variety of environments throughout the world. What makes them special is that in the mind of some investigators they possess a mix of eukaryotic and prokaryotic structural attributes. Now that is something pretty unique and worth… Read more →

Vincent, Elio, and Michael discuss how an error-prone reverse transcriptase produces enormous diversity in a Legionella protein, and using microbes to convert waste into bioelectricity and chemicals. Read more → 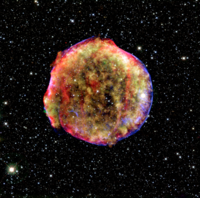 by Gemma Reguera | Famed astronomer and writer Carl Sagan said in his book Cosmos: “The nitrogen in our DNA, the calcium in our teeth, the iron in our blood, the carbon in our apple pies were made in the interiors of collapsing stars. We are made of starstuff.” And so are microbes, we must… Read more →

Pictures Considered #6 : Seeing What Isn't There

by Elio | Mapping deletion mutations by genetic tools is one thing, seeing them displayed along the length of a DNA molecule is quite another. But how can one see what isn’t there? In 1968, Ronald Davis and Norman Davidson did just that—visualizing deletion mutations in the genome of coliphage… Read more → 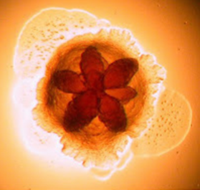 by Pedro Valero-Guillén | The production and secretion of protein toxins (exotoxins) is a most common strategy among microbial pathogens. Yet, oddly, these virulence factors are fairly rare among oral pathogens, with one exception, the Gram-negative Aggregatibacter actinomycetemcomitans. For readers with an interest in taxonomy, this microbe was originally named Actinobacillus actinomycetemcomitans and later… Read more →

TWiM #59: Are Viruses Part of Our Immune System?

Vincent and Michael discuss the finding that bacteriophage might be part of the mucosal antimicrobial defense system. Read more →

by S. Marvin Friedman | As discussed in a recent epic Perspective on the animal-microbe symbioses (and commented in this blog), we are beginning to understand the many contributions made by each partner. One of the most widely studied symbioses is that of the luminous bacterium Vibrio fischeri and the Hawaiian Bobtail squid, Euprymna scolopes. In a recent publication… Read more →