As discussed in a recent epic Perspective on the animal-microbe symbioses (and commented in this blog), we are beginning to understand the many contributions made by each partner. One of the most widely studied symbioses is that of the luminous bacterium Vibrio fischeri and the Hawaiian Bobtail squid, Euprymna scolopes. In a recent publication, Heath-Heckman and coworkers determined that bacterial bioluminescence regulates the expression of a squid circadian rhythm (cryptochrome) gene (cryptochromes are a family of blue light receptor proteins involved in circadian rhythms of animals and plants). 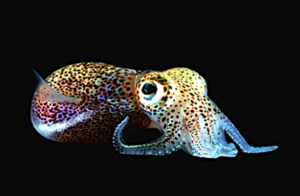 Over the past few years, bacterial partners have been implicated in their host’s circadian rhythms. For example, in humans, immune competence requires that such rhythms be intact. Normal functions of the gut, such as peristaltic activity, undergo circadian rhythms that are likely to be impacted by the gut microbiota. Likewise, several conditions, such as obesity, diabetes, depression, and sleep disorders are associated with aberrant circadian rhythms and imbalances in the gut microbiota. Tantalizing though this is, in none of these systems has a direct interaction between symbiont and host been demonstrated. The first instance involves the squid and its vibrio.

V. fischeri colonizes deep crypt spaces of the E. scolopes light organ located in the animal’s mantle. Complete light organ development is triggered by the symbiont’s MAPS (microbe associated molecular patterns), namely the lipid A moiety of lipopolysaccharide (LPS) and the peptidoglycan monomer tracheal cytotoxin (TCT). The squid is a nocturnal predator and the symbiont luminescence peaks at night when the animal is active, a timing opposite to that of the environmental light cue.

Fig. 2: The cryptochromes in the symbiotic organ of E. scolopes. (A) The juvenile animal. e, eyes; lo, light organ, seen through ventral mantle tissue. (B) A light micrograph of a cross section of the juvenile light organ. The interior of the organ contains three epithelium-lined crypts (1–3), each harboring bacteria (b) in the crypt lumen. Surrounding the light organ and controlling light emission from the organ into the environment are the ink sac (is) and reflector (r); hg, hindgut. Source.

Invertebrate cryptochromes fall into two groups: the members of one (Cry1) are light activated and lead to degradation of core clock machinery repressors, whereas the others (Cry2) are light independent transcriptional repressors of the core clock genes. When these investigators examined the transcriptional databases for the E. scolopes light organ, they detected expression of two cryptochrome genes, designated escry1 and escry2. They performed real time quantitative reverse transcriptase PCR (qRTPCR) on juvenile light organs that were colonized with symbionts, using four time points over the day/night cycle. They compared the patterns of escry expression in the light organ to that in the heads of the same juvenile squids. Levels of escry1 and escry2 mRNAs did not vary significantly in the head, but in the light organ, escry1 mRNA levels alone changed during the day/night cycle. Furthermore, mRNA levels peaked in the light organ at periods of high light organ luminescence, shifted 6+ hours from that observed in the head. Animals caught in the wild reacted the same way as those raised in the lab. Thus, the pattern of escry1 expression is due neither to laboratory conditions nor to a specific life stage. In addition, the diel patterns of mRNA levels in non-colonized squid did not show the variation in escry1 mRNA levels seen in symbiotic animals. These data are consistent with the idea that escry1 expression undergoes cycles in the light organ resulting from induction by light from its symbionts.

Bacteria Shine Light On the Squid 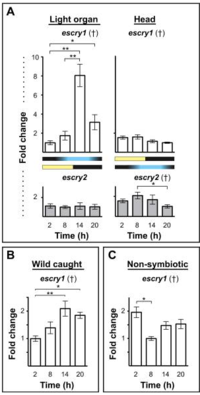 Is EsCry1 protein synthesized in close proximity to the luminescent bacterial partner? To find out, the authors raised an antibody to a unique peptide sequence on EsCry1. This antibody displayed cross reactivity to the cryptepithelial cells that shelter the symbiotic bacteria. The label was detected throughout these cells but was concentrated at the apical surface. So, is bacterial luminescence critical for the entrainment of escry1 mRNA cycling? The level of this mRNA when the squid was colonized by V. fischeri mutants (lux) defective in light production did not differ significantly from that found in non-colonized squids. Animals colonized by the Δlux mutants exposed to blue light, however, showed an increase in escry1 mRNA levels similar to those found in animals colonized with wild type bacteria. It should be noted that the cell density reached by the Δlux strain in the light organ was only 10% of that of wild type bacteria. Could the failure of the Δlux mutant to induce expression of escry1 merely reflect a population effect? To answer this question, the researchers tested a lysine auxotroph of V. fischeri that colonizes the light organ to the same extent as the Δlux mutant but emits the same level of luminescence per cell as the wild type. The lysine auxotroph induced a much higher expression of escry1 than the Δlux mutant, thus indicating that bacterial light, not bacterial density is a critical factor regulating increased expression of escry1.

The investigators now asked whether light alone could induce cycling of escry1 expression. Illuminating the light organs of non-symbiotic squid with a cycle of exogenous blue light of the same wavelength as that emitted by wild type V. fischeri resulted in no increase in escry1 expression. However, exposure to blue light plus adding the MAMPs lipid A and TCT did induce cycling. Treatment with lipid A or TCT alone did not affect levels of escry1 mRNA.

This study clearly implicates three bacterial products, namely blue light, lipid A, and a peptidoglycan monomer in the cyclic expression of a cryptochrome gene in the symbiotic organ of the squid. For the first time, a direct role of the bacterial symbiont in the circadian rhythms of its host has been demonstrated, thus providing important insights for future work with the more complicated mammalian systems. An emerging hypothesis is that microbiota and host cooperate to develop and maintain biological rhythms that are essential for the homeostasis of the symbiotic relationship. These studies bode well for future work on the mechanism whereby bacterial symbionts influence their host’s circadian rhythm as well as many of its other crucial physiological activities.

This is astonishingly good work, and a very clever adaptation by E. scolopes.