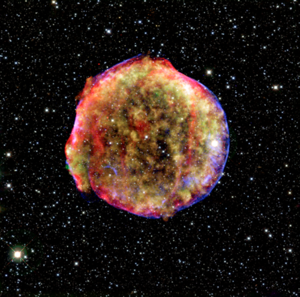 Figure 1. Using infrared and X-ray data collected from several observatories, scientist generated this image showing the remnant of the Tycho supernova, which was generated by the explosion of a star four centuries ago. Source.

Famed astronomer and writer Carl Sagan said in his book Cosmos: “The nitrogen in our DNA, the calcium in our teeth, the iron in our blood, the carbon in our apple pies were made in the interiors of collapsing stars. We are made of starstuff.” And so are microbes, we must add. To understand the significance of this statement, it is worth first learning about stars and their explosive death, the supernova.

The life and death of a star
Most stars grow and die quietly, cooling off slowly until they are extinguished. However, a small percentage of them grow to massive proportions until they can no longer sustain their mass and collapse. This is a spectacular way to die: a powerful yet breathtakingly beautiful explosion of energy and light called a supernova. The road to a supernova is an alchemist’s dream. The core of the star is like a massive nuclear reactor, where atoms collide and fuse to make new elements in a process known as stellar nucleosynthesis. In young, small stars, the core is filled with hydrogen fuel, which fuses to generate helium. As helium accumulates in the core, hydrogen is pushed outside as an external concentric shell. The helium atoms in the star’s core then collide and generate carbon, which pushes the helium outside. And the sequence of reactions continues with carbon forming neon, neon generating oxygen, oxygen fusing to produce silicon, and finally, silicon becoming nickel, which decays rapidly to form iron. This dynamic process of nucleosynthesis pushes the older elements outside the core and stratifies them as concentric layers that tell the age of the star, pretty much like the rings of a tree trunk, with hydrogen in the external shell, then helium, carbon, neon, oxygen, silicon and, finally, iron in the core. Each layer is active, as if burning, and it feeds the product of its nuclear reaction to the layer underneath. Except for iron, which cannot burn, so it accumulates in the core until it reaches an unsustainable mass. It then collapses, provoking a massive nuclear explosion … the supernova. The explosion generates so much energy that new elements (those heavier than oxygen and iron) are formed and spewed into space along with all the other star materials forming what is known as supernova remnants. 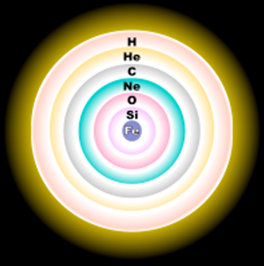 Figure 2. A star grows forming concentric shells or layers of elements, from hydrogen (H) on the outside to iron (Fe) in the core. Each layer tells the age of the star but also the sequence of nuclear reactions taking place in the star’s core during the lifetime of the stellar body, with hydrogen being the first fuel, then helium (He), carbon (C), neon (Ne), etc. In the end, an iron core is formed that grows in size until it collapses and causes a explosion or supernova. Source.

When supernovae remnants reached the Earth…
A supernova may be the death of the star but it is also the beginning of life as we know it. If close enough to the Earth, the radiation and materials spewed during the explosion penetrate through the ozone layer, affecting the chemistry of the atmosphere and dispersing the supernova elements onto our planet. The intense radiation that permeates the atmosphere and reaches the biosphere can also be lethal. Some scientists speculate, for example, that a near-Earth supernova could have been responsible for the Ordovician extinction, one of the five major extinction events in the history of our planet that led to the disappearance of 60% of all ocean life some 450 million years ago. To gather evidence for supernova explosions that could have reached the Earth, scientists began looking in our rock record for star elements (Carl Sagan’s starstuff) that could remain in our planet even after millions of years. One such element is 60Fe, an iron isotope generated during stellar nucleosynthesis, which is especially abundant in supernovae debris. As 60Fe is only scarcely found on Earth and it decays slowly (half-life of 2.6 million years), researchers looked for high concentrations of cosmic 60Fe in the rock record as indicators of past supernova events that reached our planet. And this is when things got interesting... 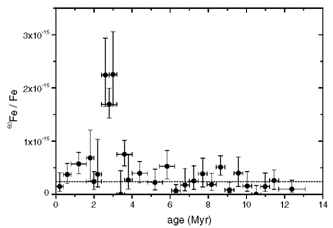 Figure 3. The 60Fe-Fe ratio of a ferromanganese crust of the Pacific ocean floor spiked in layers deposited some 3 million years ago, suggesting they are remnants of a supernova event. Source.

‘Starstuff’ in the ocean floor
In 2004, Knie and collaborators measured high ratios of supernova 60Fe to total Fe present in ferromanganese crust layers deposited some 2.8 million years ago on the Pacific ocean floor. Based on the decay rates of 60Fe and its estimated concentration and velocity in modern supernovae, the researchers calculated that the amount of 60Fe detected in the ocean crust corresponded to a supernova located at a distance of “just” a few 10 pc from the Earth. Keep in mind that a ‘pc’ or parsec unit equals 19.2 TRILLION miles! These stellar distances sound outrageously large to us microbiologists, but they are relative short distances in astronomic terms. The bottom line is that the supernova explosion was big, really big, and happened very close to our planet. Based on the high levels of 60Fe deposition still remaining in the rocks, the researchers predicted that the supernova event exposed the Earth to a high level of cosmic radiation during approximately 300,000 years. Interestingly, the time and duration of the cosmic radiation flux coincides with the onset and length of a period in the history of Earth when the African climate shifted to more arid conditions. This climate shift has been linked to speciation events critical to the evolution of life on Earth including the evolution of hominid species. 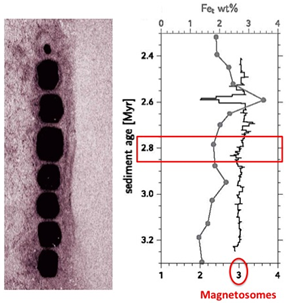 Figure 4. (Left) Electron micrograph of a thin section of a magnetosome chain (Source). (Right) Magnetosomes are the predominant form of ferromagnetic minerals in the sediment core that had the 60Fe anomaly around 2.8 Myr ago (modified from Source).

Microbes with a taste for ‘starstuff’
Microbial life was also thriving in the oceans at the time of the supernova event. However, it is difficult to know how the supernova remnants, and the radiation flux that came with it, impacted the microbial activities in the ocean sediments. In a paper published a couple of years ago, Bishop and Egli reasoned that some of the microbes in the sediment could have mineralized the cosmic 60Fe, forming minerals that may still retain the distinctive supernova element till this day. Some of the microorganisms living in the ocean sediments at these times in the Earth history, the so-called dissimilatory iron reducers, could have used the 60Fe to support their respiration. This is an extracellular process that leads to the formation of magnetite, a magnetic iron mineral of mixed Fe(III)/Fe(II) valence and distinctive structural properties. Magnetotactic microbes could have also chelated and taken up the 60Fe from the sediments to make intracellular magnetic mineral inclusions, or magnetosomes. By aligning the magnetosome inclusions as chains inside the cell, these microbes orient themselves in the geomagnetic field. The magnetosomes are magnetic crystals made up of either iron oxides (magnetite, Fe3O4) or iron sulphides (greigite, Fe3S4) and they are formed under strictly controlled chemical conditions inside the cell. As a result, the crystals are very pure and have defined and unique particle size, morphology and magnetic properties. They are also highly stable and can persist unaltered in the environment for long periods of time (millions of years!) after the cells have died. Thus, they serve as fossils (magnetofossils) and indicators of past magnetotactic activity. Bishop and Egli hypothesized that magnetofossils present in the enriched 60Fe sediments may also be useful indicators of microbial activities during the time that the oceans were exposed to the supernova remnants and radiation. To test this, they measured the magnetic momentum of all the ferromagnetic minerals and of intact magnetosomes across a sediment core representing sediment ages within the 2.4–3.3 Myr age interval and calculated the concentration of magnetofossils. The magnetization profile showed, quite consistently, that magnetosomes were the predominant form of magnetic iron minerals in the sediment layers preceding and spanning the 60Fe deposition some 2.8 Myr ago. Thus, magnetotactic bacteria appeared to have continued to carry out their business using the cosmic iron!

What I would have loved to see are actual measurements of the 60Fe content of intact magnetosomes isolated from these sediment cores, as Knie and collaborators did for the bulk sediments. Yet even without this final corroboration, the studies strongly suggest that the microbes in the ocean floor adapted to the supernova event and used the available cosmic elements to support their activities. 60Fe serves as a proxy of the time that our planet was exposed to supernova debris because we can still measure it after almost 3 million years. However, the supernova remnants enriched the Earth with many other elements, potentially supporting other microbial activities and enabling microbial life to evolve in new ways. In the end, Carl Sagan’s words say it all. We are all made of starstuff. Specially microbes, which have been feeding on stars for a long, long time. They are indeed living beings with star-like qualities, so think about it next time you get a Strep throat!

The current estimate for average starting speed of a pulsar is ~450 km/s. When a young pulsar looks like it's going slowly, it's more often just headed away from us.

By the way, I don't understand figure 4R. It shows a dramatic Fe spike at 2.6 Mya and corrresponding drop in magnetite microfossils, but calls attention to an undistinguished 2.8 Mya. What do they suggest happened at 2.6 Mya?