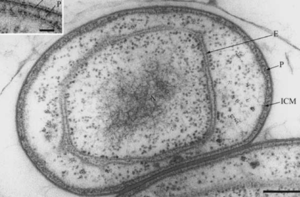 Figure 1. The original interpretation of the G. obscuriglobus cellular organization. Thin section of cryosubstituted bud cell with large nuclear body bounded by a “nuclear envelope” (E) consisting of two membranes between which is a clear electron-transparent space. The nuclear body contains ribosome-like particles as well as a nucleoid. It is surrounded by cytoplasm that contains superficially similar ribosome-like particles and is bounded by a single intracytoplasmic membrane (ICM). Bar: 200 nm. Source.

Members of the bacterial phylum Planctomycetes (click here and here) inhabit a wide variety of environments throughout the world. What makes them special is that in the mind of some investigators they possess a mix of eukaryotic and prokaryotic structural attributes. Now that is something pretty unique and worth contemplating. This group of organisms has been previously described in this blog by previous graduate students. So this serves as an update, which is timely because there is critical news on the plancto front.

What Do You See Inside The Planctos?

Under the electron microscope, sectioned Planctomycetes cells reveal that their internal membrane is highly folded into apparent compartment, including a purported membrane-bound nuclear region. It has been suggested that this arrangement, almost unheard of among prokaryotes, is evidence for the planctos being a “missing link” between Bacteria and Eukaryotes. The linchpin for this notion that the planctos may be some kind of remnant of eukaryogenesis has been their “nuclear envelope,” which is thought to totally surround the nucleoid. There are yet other arguments in favor of this notion, e. g., they are able to endocytose and they divide by budding (although so do other bacteria, such as Caulobacter crescentus). In addition, those planctos capable of anammox (anaerobic ammonia oxidation coupled with nitrate reduction) contain an organelle, a membrane-bound structure called the anammoxosome. Yet, the presence of organelles is not unique to this group of bacteria. Of interest is also that planctos do not contain peptidoglycan in their cell wall, something limited to few bacteria. Surprisingly, they carry genes encoding for known outer membrane proteins and peptidoglycan synthesis, although in this regard they may not be all that unique either because chlamydiae and mycoplasmas also lack peptidoglycan, plus the chlamydiae also carry genes for its synthesis. 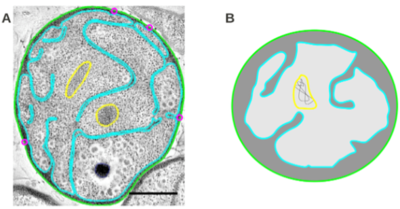 Figure 2. The newer interpretation of the G. obscuriglobus cellular organization. Shown here is a 3D reconstruction of bacteria with a complex endomembrane system. (A) One slice of the tomogram is represented with the different structural features modeled. Green: Outer membrane. Cyan: Inner membrane. Yellow: DNA. Pink: Outer membrane invaginations. Dark blue: polyphosphate granule. Scale bar: 500 nm. (B) Schematic of the cellular organization of G. obscuriglobus, not to scale. The periplasmic and cytoplasmic spaces are in dark and pale grey, respectively. Other colors are the same as in (A). Source.

But How Different Are They?

A paper by Santarella-Mellwig et al. argues that the extensive compartmentalization seen in the plancto Gemmata obscuriglobus is actually the result it having a large membrane that is continuous with their typically Gram-negative inner membrane. Using electron microscope tomography on thin sections, these authors reconstructed a full 3D model of a G. obscuriglobus cell. Strikingly, the extensive apparent compartmentalization results from one continuous membrane having numerous folds and invaginations. Under this interpretation, the cell is basically pretty conventional, having only two separate space—the cytoplasm and the periplasm. Accordingly, the nucleoid is distributed throughout an ostensibly inner compartment, without being enclosed by a special membrane. It is possible that previous interpretations favoring the existence of a nuclear envelope resulted from seeing the extensive inner membrane folds in close proximity to the DNA. In 2D sections, this configuration looks like a membrane-bound region. Further complicating the earlier interpretations is that they were based on sections and tomography that reconstructed less than one tenth of the cell's 2 µm thickness. The presence of ribosomes close to the nucleoid also casts doubt on this region being nucleus-like in the eukaryotic sense.

And Yet, Planctos Stand Out

Even if the idea of a membrane-bound “nucleus” has been placed into jeopardy, there still are features in the Planctomycetes that point to a possible evolutionary transition towards eukaryotes and archaea. One of the most suggestive is the presence of clathrin homologues associated with the inner membrane that presumably catalyze endocytosis, a distinctively eukaryotic process. However, intracytoplasmic vesicle formation has been induced by heterologous expression of caveolin in E. coli, implying that at least the physiological potential to form lipid-protein coated intracytoplasmic vesicles is not strictly limited to the eukaryotes. The presence of ether linked lipids and of sterol biosynthesis pathways also could be construed to be evolutionary links to archaea and eukaryotes. However, such functions may have been acquired later in evolution by horizontal gene transfer.

What Makes Planctos So Different?

All this brings up a fundamental question: why have Planctomycetes adopted such an atypical inner membrane structure compared to other Gram-negative bacteria? Extensive folding of the inner membrane is a way of increasing the surface area and is a common approach most notably seen in mitochondria and many autotrophic bacteria. While the extensive folding does increase the surface area, it does so in parallel with the increase in periplasmic volume, which might rule out any beneficial effects due to a higher surface to volume ratio alone. The larger periplasmic space could be useful for the degradation of endocytosed proteins, which may provide a possible source of ammonia for those planctos that are capable of anammox. Whatever the reasons, there must have been great evolutionary pressure to adopt and maintain this morphology because all the planctos studied so far have an enlarged periplasm. As an aside, the planctos make a special class of lipids in their anammoxosome membrane, the ladder-shaped ladderanes. While the biosynthetic routes for these unique lipids are not well understood, their role in the anammoxosome membrane is most likely to decrease permeability, a way to keep toxic intermediates of the anammox process, e.g., hydrazine, from escaping into the cytoplasm.

A Genetic System Would Be Nice

One possible route towards sorting out these physiological features and their importance in growth and viability would be to use classical genetic approaches, such as constructing gene knockouts. In 2011 the first report of a developed genetic system for Planctomyces limnophilus has been published. This species was chosen because its genome has been sequenced and it displays the fastest growth rates in the laboratory. By using Tn5 transposon mutagenesis, the investigators were able to generate ten unique mutants with distinct insertions. While a site directed approach has not been developed yet, the ability to transform foreign DNA into the genome suggests that such a system might be developed in the near future. Furthermore, given their ubiquitous distribution in a wide variety of environments, it’s likely that Planctomycetes have some type of phage predator. Finding phages would help develop genetic tools, just as it has helped develop genetic systems in many other bacteria.

Despite what appears to be the lack of a true nuclear envelope, Planctomycetes remain an interesting example of variation on the familiar Gram-negative body plan. Much of the physiological studies done so far have relied on microscopy and 3D reconstruction of sections. The potential for genetic manipulation in these organisms conjures up a whole new opportunity for studying gene functions and how they affect the ecology of these unique organisms.

Marco is a graduate student In Eric Allen’s lab who participated in the 2013 UCSD/SDSU Joint Doctoral Integrative Microbiology graduate course.

Jogler C, Glöckner FO, & Kolter R (2011). Characterization of Planctomyces limnophilus and development of genetic tools for its manipulation establish it as a model species for the phylum Planctomycetes. Applied and environmental microbiology, 77 (16), 5826-9 PMID: 21724885