A Whiff of Taxonomy – Archaeoglobus fulgidus 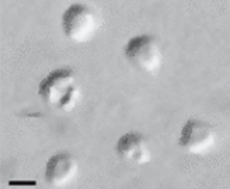 Cells of A. fulgidus are typically irregular and with a dimple. Bar: 0.5 µm. Source.

Pick an archaeon, any archaeon, and you will find it has a story to tell. Not all archaea are exotic but plenty of them are. These stalwarts live in environments we humans call extreme, where they carry out what to us seem extreme types of metabolic conversions. Most have come rather late into our awareness. To redress their neglect, I picked one almost at random. It’s a hyperthermophile called Archaeoglobus fulgidus (the genus name derives from “ancient sphere,” the species from “shining,” for its UV fluorescent glow under 420 nm light). The genus was proposed by Stetter in 1988.

The family to which this species belongs, the Archaeoglobales, is typically hyperthermophilic. A. fulgidus grows optimally at 83 °C and is at home in hellish environments such as deep sea vents, oil deposits, and hot springs. A chemolithoautotroph, it reduces sulfate to sulfide, specifically to iron sulfide when given steel pipes to 'eat'. Since iron sulfide corrodes metal pipes, it is a nuisance to the humans tapping oil deposits to produce oil and gas. On the other hand, this skill may come in handy for detoxifying metal contaminants at high temperatures.

This organism is related to archaeal methanogens such as Methanococcus, as well as Thermococcus. A. fulgidus has most of the genes for methanogenesis but lack the needed methyl-CoA reductase. So if it makes methane (which it does in small amounts), it doesn’t do it in the way of most methanogens. Its genome is relatively small, 2,178,400 base pairs, with 2,486 predicted protein coding genes. A. fulgidus is one of the better studied Archaea. Entering its name in PubMed (a questionable metric) yields 526 hits.

Now, what distinguishes A. fulgidus? Not unique among prokaryotes but well developed in this species is its ability to reduce perchlorate, an oxidant used in rocket propellants. Perchlorate is also highly toxic and a significant persistent pollutant. In the USA, contamination stemming from rocket testing now poses health risks to some people in at least 43 states. The bacteria that metabolize perchlorate have an enzyme, chlorite dismutase, which detoxifies the chlorite produced. A. fulgidus lacks that enzyme and appears to be the only prokaryote so far that can reduce perchlorate without it. Presumably, in its environment chlorite is reduced by abiotic processes. Not to sound like an archaeal chauvinist, here is also a recent paper on the decomposition of perchlorate by bacteria.

Such processes may have been important long before people made perchlorate because this compound is formed naturally. So, perchlorate metabolism may have evolved quite early and possibly in ways that differed between mesophilic bacteria and a thermophilic archaeon. These organisms may have helped detoxify the early world, for all we know. And now our activities have provided yet more work for them to do. From the point of view of A. fulgidus, our donation of perchlorate to the environment may not be pollution but perhaps a return to the good old days.