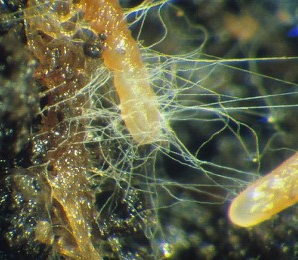 Quick, which is the biggest symbiotic association on Earth? Did you guess the mycorrhizae? They are the huge symbioses between fungi and the roots of most terrestrial plants. Their total size is not easy to measure because not all the fungal filaments in soils are mycorrhizal nor are the mycorrhizal ones always mycorrhizing (a new verb?). Even so, one can make the case that the combined mass of the participating fungi and plant roots is colossal. A friend, the soil microbiologist David Lipson, tells me that the mass of mycorrhizal fungi on the planet is estimated to be somewhere around 1-3 x 1010 tons (that’s between 1.4 and 4 tons per person). We are obviously talking about a topic that deserves much more of our attention than it has received to date.

Plants depend on mycorrhizal fungal filaments to supply them with a stunning proportion of their needed water and minerals. In some forests, these fungi provide the plants with up to 80% of their nitrogen and 90% of their phosphorus. The fungi, in turn, depend on plants to provide them with organic compounds needed for their own growth. Although it had been stated that this traffic in carbon is unidirectional—plants-to-fungi—some 400 species of non-photosynthetic plants (e.g., Indian pipes) that lack chlorophyll are proof to the contrary. For these mycoheterotrophs, mycorrhizae are the primary suppliers of essential carbon compounds.

Mycorrhizal fungi tend to be promiscuous. By associating with diverse plants they form humongous underground networks, known as Common Mycelial Networks or CMNs. By some estimates, a typical mycorrhizal fungal filament is hundreds or thousand times the length of one tree root. Not only that, fungal filaments can anastomose with those of other species to craft what potentially is an indefinitely large network. We can only imagine what area such networks may encompass-who knows, they may literally span entire continents. And most of us, me included, have been nearly oblivious of their very existence. If you would like to find out more about the intricate ways that plants and fungi ensure their symbiotic success, see recent reviews here and here.

So far this has been the conventional, perhaps old-fashioned view of mycorrhizae. But this unseen vast web does more than ferry water and nutrients. The CMN also provides for long distance communication between plants by conveying chemical information that can benefit the recipients, e.g., stimulate defense against parasites, or do them harm, e.g., inhibit the growth of neighboring plants. This exchange of signaling molecules influences both plant ecology and their evolution, possibly in a big way. For those who like longish names, this strategy of chemically influencing the activities of other organisms is called allelopathy. That mycorrhizal networks are a major conduit for such exchanges is a relatively new insight. Click here and here for reviews on this novel but key aspect of mycorrhizology. Readers who have stayed with me thus far will recognize that since mycorrhizae can include fungi of different species each of which may not be host specific, they allow plants of different species to communicate (see “Socialism in Soil” ).

Here are some examples of the diverse roles that signaling molecules channeled by the underground mycorrhizal mycelia play in the plant world. Gentle marigolds, beloved by gardeners, inhibit the growth of neighboring plants by producing some phytotoxic thiophenes that are then delivered to their neighbors by through the mycorrhizae. How to demonstrate this? In early experiments, a model compound such as a herbicide was administered to test plants. The amount of the substance in the soil at various distances from the plants was measured in the presence or absence of mycorrhizae, with the plant roots excluded from participating. The compounds tested traveled farther and in greater amounts when the mycelial networks were present. 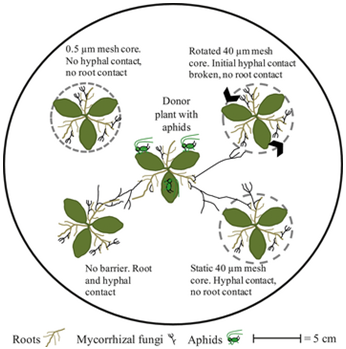 Figure 2. Experimental mesocosm (30 cm diameter) showing the donor plant, which was colonized by aphids, and four aphid-free receiver plants. All plants were grown in the mycorrhizal condition but one plant was prevented from forming mycelial connections to donor plants (by a 0.5 μm mesh), another was allowed to form connections initially but the connections were snapped after additions of aphids to the donor (by rotating a 40 μm mesh), and two other plants were allowed to form shared mycorrhizal fungal networks (non-rotated 40 μm mesh allowing fungal contact only) with the donor plant for the duration of the experiment. Source.

Other investigators demonstrated the transfer of defensive molecules made by tomato plants in response to infection by a pathogenic fungus, Alternaria solani. Here infected donor plants were allowed to establish mycorrhizal connections with healthy, noninfected recipients. The level of six defensive enzymes, including peroxidase and polyphenol oxidases, increased notably in the healthy plants. What is more, the recipient plants had become more resistant to that pathogen. In the words of the authors, this suggests that plants can ‘eavesdrop’ on defence signals from the pathogen-challenged neighbours through CMNs to activate defences before being attacked themselves.

These early experiments led to asking other questions on interplant communication. Can plants also tell each other that they are being attacked by a herbivore, say an insect? To look into this, a group of investigators studied the transmissibility of compounds used by beans to defend against infestation by aphids. They found that the recipient plants that were not under attack themselves showed an increased resistance to the insects. Since the insect repellants (and attractants, as we will see) are volatile, the authors used plastic bags to prevent their transfer through the air. Although these signaling compounds have not yet been identified, the researchers clearly established the role of the mycelial network in their transfer. In a fascinating bit of choreography, while the volatile compounds made in response to such signaling repel aphids, some also attract aphid predators in the form of parasitoid wasps. The experimental set-up is well worth checking out (as shown in figure 2). 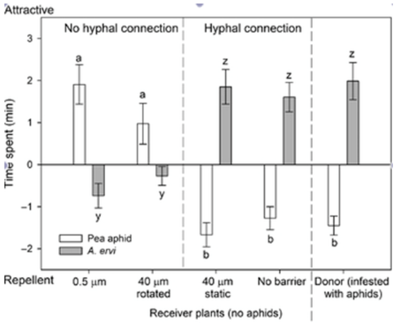 These findings may have practical importance for defending agricultural crops against insect infestation. One of the investigators, Dr. David Johnson, is quoted as saying: “Aphids affect all higher-latitude agricultural regions, including the UK, the EU, North America, and North East Asia. This research could provide a new, sustainable and natural intervention. In a field of plants that have some inducible resistance to aphids, we could use a plant that's susceptible to aphid attack to 'switch on' the defence mechanism through the natural underground connection. There's the potential to deal with other pests and diseases, in other regions, in a similar way."

I believe that mycorrhizae warrant much more attention. Their huge importance for the well-being of most plant life has global consequences. The possibility of utilizing the networks to protect our crops from pathogens and insects is exciting. Above all, knowing that the plants are sending varied and specific messages through these underground networks, we can never look at a silent forest, field, or meadow quite the same way again. Time we knew more about them.

We discussed this topic in a recent This Week in Microbiology (TWiM) podcast # 58.