« TWiM #61: The Irony of Probiotics | Main | A Whiff of Taxonomy – Archaeoglobus fulgidus »

The lab was a crime scene; dead and dying cells were everywhere—but did they commit mass suicide or were they murdered? The burly young post doc who discovered the corpses sat in the corner sobbing softly, his PI by his side. She was trying in vain to comfort her most promising young scientist in decades, hoping this wouldn’t drive him into medical school or even worse, into engineering. At a loss, Sarah Sweltweather made an emergency call to cell-death expert, Detective Chief Inspector Douglas Green at St Jude Children’s Research Hospital in Memphis. Their cells were immortalized, she told him, they weren’t supposed to die in such huge numbers; thus her post doc was unprepared for the morning’s grisly discovery. “Please,” she implored Green, “help us make some sense out of what’s happened.”

Cool as ever, Green reminded the distraught PI that dying is something cells naturally do a lot of and most cell biologists eventually get used to it. Finding out how cells die and why is our job, he added noting that cell death is rarely passive, citing “suicide, murder or sabotage” as the causes.

Suicides, continued Green, are most often carried out by apoptosis and murders committed with reactive oxygen species (ROS) or other toxic molecules released by “killer” cells. “Sabotage is a bit more subtle: here derailing some normal cellular processes kills the cell. The best known example of cell sabotage is mitotic inhibition or ‘mitotic catastrophe’ where DNA damage keeps the cell from dividing and this leads to its death.

It would be best if “I examined the crime scene myself,” cautioned Green. “Don’t touch or move anything, I’ll catch the next train out.” 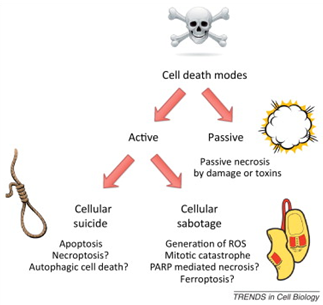 Figure 1. Active and passive cell deaths. Passive cell death occurs when a vital cellular function is directly damaged or inhibited, thus killing the cell. Active cell death can be of two forms. One can be classified as cellular might also be involved in the evolution of programmed cell death, signaling is engaged. The best example of this is apoptosis, although there may be others. Alternatively, cell death can be active—that is, a cell participates in its own demise—if cellular processes are ‘sabotaged’ such that the continuation of the process is lethal. This distinction may prove useful in understanding why there appear to be so many ways that cells can actively die. ROS, reactive oxygen species; PARP, poly-ADP ribose polymerase. Images from http://www.iStockphoto.com. Source.

The mitochondrial machinery of death

As promised, Green arrived early the next morning, assembled the Sweltweather lab members and took samples of the dead cell remnants floating about in flasks next to survivor cells struggling to replicate. “As to the cause of death, apoptosis would be my first guess, simply because it’s the most common way potentially harmful or superfluous cells dispatch themselves.”

Most apoptotic suicide programs are orchestrated by a family of protein-splitting enzymes known as caspases which cut apart about a thousand proteins in each cell marked for death. In metazoans, the activation of caspases is usually controlled by mitochondria.

Caspases operate in cascades: one caspase activating the next by slicing through a protective protein bit in the enzyme. “Each step amplifies the death signal until an army of executioners has been let loose in the cell, dismantling its membrane structures, slicing up its DNA and dicing its proteins,” said Green, quoting the ever-eloquent Nick Lane from University College, London. Fortunately for cell-death detectives, this cascade leaves microscopic telltale signs as internal structures disintegrate and the cell packages itself for a neat burial,” he added.

“What’s particularly interesting about apoptosis is that it looks like an ancient cell-death pathway originating in α-proteobacteria and conserved in their mitochondrial descendants,” said Green. Johannes Asplund-Samuelsson, Birgitta Bergman, a group led by John Larsson at Stockholm University agree that caspases have been introduced into eukaryotes by a bacterial ancestor during the endosymbiotic event that gave rise to mitochondria and go one step further. They hold that a similar symbiosis involving cyanobacteria resulted in chloroplasts and led to the evolution of the plant kingdom. This, they say, could represent a second route of caspase introduction.

Metacaspases—prokaryotic caspase homologs—are one proof of this concept. While caspases are the central executioners in metazoans, metacaspases perform the same role in some bacteria and single-celled eukaryotes and are similarly ubiquitous. “Some archaea also carry metacaspases but they represent a minority of those so far sequenced and it is not known [exactly] what function those genes have. It is, however, open for speculation and not impossible that archaea might also be involved in the evolution of programmed cell death,” according to Asplund-Samuelsson. A number of scientists suspect that metacaspases and caspases have the same ancestor. Although identifying that ancestor is difficult, the scientific finger points to cyanobacteria if only because the present-day variety has the richest reservoir of metacaspases. But other developmentally complex, symbiotically competent species, especially some α-proteobacteria and actinomycetes, have them in abundance as well. Considering the fluid nature of gene flow among bacteria, mused Green, it’s difficult to tell.

Programmed cell death (PCD) is important to metazoans because it’s key to homeostasis, embryo development, defense against a variety of pathogens and cancer-cell elimination. However, successful multicellularity as, for example, in biofilms demands control over individual cell behavior; PCD does this by tightly regulating self-destruction in prokaryotes and simple eukaryotes. In fact, Asplund-Samuelsson and others contend that the death of some cells can benefit the survivors and is therefore, altruistic—a belief that has been largely substantiated by a group led by L. You at Duke University in Durham, North Carolina. Researchers there engineered stress-induced death in Escherichia coli and showed to their satisfaction the previously widely believed notion that PCD was the ultimate form of cooperation; by killing themselves, the dying bacteria contributed nutrients and virulence factors to the public good helping their kin to survive. Asplund-Samuelsson speculates that sacrifice of a subset of cells through genetically controlled death could enable those remaining to re-start growth and perpetuate the genotype rather than allowing the whole group to become extinct. PCD, he also contends, is a very successful anti-viral tactic highly relevant to life in the oceans, which contain viruses in abundance; hundreds of millions per ml. Paul Falkowski at Rutgers University in New Jersey said in a 2008 Nature interview that the bacteria and small eukaryotes in ancient oceans—the phytoplankton—might very well have been the first creatures to learn how to die in order to thwart predatory viruses. 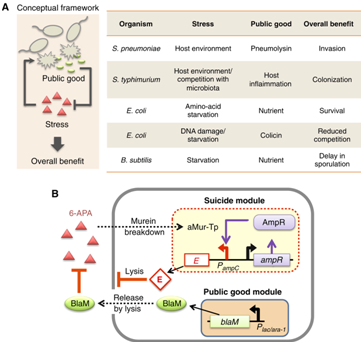 Figure 2. Altruistic bacterial death in response to stress. (A) Coupling programmed death with public-good production. Some cells undergo programmed death in response to stress (red triangles), leading to generation of a public good (green ovals). The public good removes the stress, allowing survival and recovery of the overall population. Table: examples of natural systems where programmed bacterial death has been proposed to be altruistic by providing direct or indirect benefits to survivors. (B) A synthetic gene circuit to program altruistic death. 6-APA causes murein breakdown and generates aMur-Tp inside the cell, which induces expression of the E gene by activating the PampC promoter through AmpR. A non-secreted form of beta-lactamase (BlaM) is placed under IPTG-inducible promoter, Plac/ara-1. Upon cell lysis owing to E expression, BlaM is released to the extracellular space where it degrades 6-APA. Here, 6-APA represents the stress, BlaM the public good. Source.

“It’s a common error to assume that immortalized cells—typified by those that cause cancers—are apoptosis-resistant but they’re not” said Green. “In truth, these cells need only disrupt the death pathway tied to tumor suppression and then divide faster than then die. Indeed, many cancers are ‘primed to die’ and this can predict their response to conventional therapy.”

“Moreover, the idea that cancer cells have dysfunctional mitochondria is a common misread of the Warburg theory,” Green adds. Most immortalized cells respire but, for reasons we’re only starting to understand, they also shuttle glucose to lactate.” One explanation is that early Earth was oxygen free and thus all ancient microbes were anaerobic. Many, if not most bacteria alive today know how to ferment and even prefer it but have learned to respire out of necessity. Both mitochondria and chloroplasts have very ancient origins and although primarily aerobic are also able to resurrect anaerobic metabolic traits when necessary.

“My preliminary conclusion is that your ‘immortalized’ eukaryotic cells have been doing very nicely in the cushy environment of a laboratory—but they aren’t death resistant; they’ve simply been replicating faster than they die. Something must have activated a dormant mitochondrial death program; my guess is that someone forgot to feed them. I don’t see any foul play. But life at the cellular level is durable and it’s almost a certainty that there’s a vibrant new group of cells proliferating as we speak. I’ll have a final report for you as soon as our laboratory findings are in.”

“Let me leave you with one last thought,” said Green. “If, indeed, the origins of apoptosis in eukaryotes originated in our bacterial and, perhaps, archaeal ancestors, the cell-death mechanisms we find in our own cells are probably more phylogenetically widespread and less unique to us than we once assumed. The variations on a basic theme we see in metazoans would then reflect the importance of cell death to life suggesting that it’s likely there are many morecell-culling mechanisms awaiting discovery.

Editors’ Note: This is the fifth in what is expected to be an ongoing series about cells and processes that might not come immediately to mind when you think “microbe.” The first four in the series can be linked here—Oddly Microbial: Ribocytes, Oddly Microbial: Cancer Cells, Oddly Microbial: 86-Million Year-Old Deep Seabed Mystery Cells and Oddly Microbial: Prions. Comments on live posts and suggestions for future articles are encouraged.