« From The Program of 1st Annual Meeting Society of American Bacteriologists, 1899 | Main | Pictures Considered #7 : Cocci Divide at The Equator »

Polymicrobial Infections: Perhaps The Rule, Not The Exception 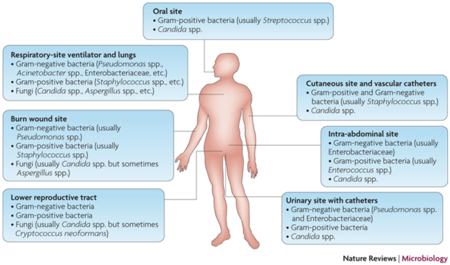 Figure 1. Critically ill patients in the intensive-care unit are good examples of the diversity of sites at which bacteria and fungi can interact and cause disease. The boxes describe the organisms that are most commonly found at each site. Source.

The recent film World War Z describes an apocalyptic event where a rabies-like virus spreads via bite wounds to the majority of Earth’s population and turns them into zombies. Since the world’s leading virologist dies early in the film, it is up to Brad Pitt’s character to find the source and cure for this zombie virus. Spoiler alert: He discovers that virus-infected individuals will not bite humans with other infections or terminal illnesses, and proceeds to infect himself with a BSL4 pathogen and walk among the zombies unscathed. Although every scientist reading has first cringed and then come up with at least a half dozen reasons why this is not possible, the point is that even the film industry is recognizing that pathogenic (and non-pathogenic) microbes are capable of communicating with one another within the host to alter the course of disease.

Intermicrobial communication must in fact a common event, since symptomatic polymicrobial infections arise at considerable frequency, although exact epidemiological occurrences are unknown at this point. This is hardly surprising given that we are in constant contact with numerous opportunistic microbes residing on our body’s epithelial barriers (skin, mucous membranes). Click here for a review of this topic. However, in typical current clinical practice, one pathogen responsible for the disease is identified and targeted for treatment with more or less specific antimicrobial drugs. Because of this narrow scope of treatment, other colonizing microbes, not normally virulent, may be given a competitive edge, leading to chronic infections or severe complications. An old Aesop’s adage comes to mind: A doubtful (opportunistic) friend is worse than a certain (pathogenic) enemy.

Although we have been aware of polymicrobial infections, arguably for centuries, only recently has biotechnology allowed the delicate dissection of the role of individual microbial species in infections.  This includes metabolic and chemical interactions between microbes as well as joint attacks on the host immune system. I will focus on a few recent discoveries that illustrate types of microbial collaborations during infection. 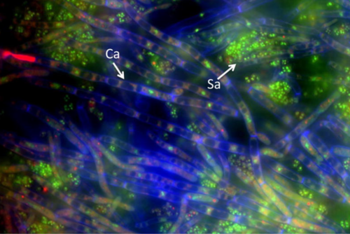 How do microbes establish complex interactions when present together in a given tissue?  The answer is: every which way! Some amplify virulence of one or more species; others promote long-term persistence. For example, in chronic skin wounds, Pseudomonas aeruginosa virulence is activated by Gram-positive organisms, such as Staphylococcus aureus. Here, Pseudomonas senses the presence of peptidoglycan shed by Staphylococcus, which results in enhanced production of the toxin pyocyanin. The result is greater host killing. Clearly, interspecies bacterial communication influences the regulation of gene expression. Here is an in vitro example:  co-culture of two opportunistic pathogens of the human respiratory tract, Streptococcus pyogenes (Group A Streptococcus, GAS) and Moraxella catarrhalis, increases transcription of several GAS virulence factors including hyaluronan synthase and streptococcal mitogenic exotoxin Z. At the same time, the expression of 12 GAS two-component regulatory systems (containing the well-studied control of virulence (covR/S) regulatory system, which down regulates virulence factors) decreases, thus making the point that interaction between two microbes can turn an opportunist such as GAS into a serious pathogen.

Interaction between species also contributes to successful microbial persistence.  For example, S. aureus, which is a poor former of monoculture biofilms, and Candida albicans together form unusual, but effective, mixed biofilms, where the yeast creates a scaffold for the bacterium. Within this microenvironment, S. aureus produces two virulence factors: coagulase and the protein Efb. Coagulase binds fibrinogen and effectively coats Candida species with a layer of fibrin, preventing phagocytosis of Candida by the host. Efb also binds fibrinogen and prevents complement-mediated opsonization by a different mechanism. So, virulence synergy happens not only between Gram-negatives and Gram-positives, but also between bacteria and yeast. Pathogens may be bad taxonomists, but they excel at pathogenesis.

As is well known, persons with a pathogen-induced compromised immune system, such as that caused by HIV-mediated destruction of CD4+ T cells, die of secondary infections if untreated.  Here, infection by one pathogen manipulates host immunity to the benefit of other pathogens. Many diverse interactions have recently been discovered that directly inhibit innate or adaptive immunity. For instance, during pulmonary co-infection, influenza A virus seems to protect Mycobacterium bovis by reducing the numbers of mycobacterial-specific CD8+ T cells and inhibiting mycobacterial clearance.

Interestingly, the ability to modulate the host immune response also depends on the host disease state. For example, in cystic fibrosis (CF) patients, bronchiolar epithelial cells first infected with P. aeruginosa and then with rhinovirus produce lower levels of interferons, whereas in normal bronchiolar epithelial cells, interferon production increases. Thus, in CF patients, not only is innate immunity modulated by chronic P. aeruginosa infection, the disease is simultaneously exacerbated by disease-induced oxidative stress. Aren’t you captivated by the precise and effective measures pathogens have jointly developed to evade host immunity and promote transmission?

Epidemiological studies have recently uncovered correlations between seemingly unrelated infectious agents that cause unrelated-sounding diseases. For example, co-infection with Legionella pneumophila and influenza A virus decreases host survival, not, as could be anticipated, by heightening the inflammatory response, but rather by impairing the host’s ability to tolerate tissue damage. This takes place in part by repressing the epithelial growth factor pathways that are critical for maintaining tissue homeostasis and repair. The involvement of pathogens in disease progression may be even more obscure. In a large-scale community study, separate infection of two independent organs, by Chlamydia pneumoniae in the lungs, and by Helicobacter pylori in the stomach, was significantly associated with hypertension. Although how this works remains to be elucidated, it is possible that infections of these two agents separately increase risk of infection by inducing autoimmunity, perturbing cholesterol metabolism, and sustaining proinflammatory signaling.

Surprisingly, co-infections are not always detrimental to the host. A recent study reported that in patients co-infected with two strains of human papillomavirus (HPV strains 16 and 34), the incidence of lymph node metastasis was reduced compared to those infected with HPV 16 alone. And, just as unexpected, infection with H. pylori may be beneficial in reducing allergic asthma through heightening the activation and accumulation of Treg cells in the lungs. The span of microbial interactions within the human body is certainly unpredicted and may even turn out to be unpredictable.

Publications pertaining to polymicrobial infections have doubled from 2010 to 2011 and increased again by 50% in 2012. Additionally, the list of known polymicrobial diseases, and the nature of microbial communication, is growing.

There has definitely been a heightened awareness both in the scientific and medical communities as we progress beyond the narrow but useful definition of a pathogen as defined by Koch’s postulates. But where is this field going to be in five years? Most likely, there will be better diagnostics to more readily assess microbial communities in infected tissue. Already, companies have been striving for rapid, accurate, and cost-effective next-generation sequencing of clinical samples to better diagnose complex bacterial infections. Just as importantly, we may begin altering treatment regimens for individuals with multiple organismal infections that are caused by an array of bacteria, virus, fungi, and parasites. Treatment with deworming medications in helminth-infected populations has unfortunately led to increased morbidity and spread of other pathogens, such as HIV and malaria. Consequently, integrated approaches must be developed based on the nature and severity of specific co-infections. Although this is by no means a new field, the increased mindfulness of the nature of polymicrobial infections should aid in staving off treatment-driven antimicrobial resistance and strengthen the overall global combat of infectious disease.

And personally, if I were to attempt to cure the world of a zombie virus, I would target the host immune system as opposed to voluntarily receiving a lethal infection. What would you do?

Katy is a graduate student in Kelly Doran’s lab in the San Diego State University/UCSD joint doctoral program in microbiology and a participant in the 2013 UCSD/SDSU Integrated Microbiology course.