Whether inhabiting soil, fresh water, or marine ecosystems, bacteria are constantly facing the threat of numerous and effective predators such as protists, nematodes, or phages. To defend against such predation, bacteria have evolved a number of strategies, including getting larger in size, moving faster, producing defensive secondary metabolites, and forming biofilms. Because of its anthropocentric appeal, one strategy stands out—keeping a locked armory of genetic weapons. The strategy involves breaking open the armory when confronted by perils—activating the genes that were locked mostly to save the cost of expressing them when not needed.

Despite the selective pressure to retain only functional genes, bacteria also carry silent or cryptic genes, so called because they are not inducible under most laboratory conditions and probably not in many natural habitats either. Their continued presence in the genome without being discarded is a puzzle. The β-glucoside (bgl) operon of Escherichia coli and other Gram-negative bacteria is one such example. In the lab, it is usually silent and cannot be induced by any known compound. However, it can be rendered active by a number of mutations in regulatory genes (which is another interesting story for another time). When activated, the bgl operon makes the enzymes for transporting and catabolizing aromatic β-glucosides, such as salicin, arbutin, and esculin. These are secondary metabolites made by plants to defend against herbivores, and consist of aromatic moieties linked to glucose via a β- glycosidic bond. Once hydrolyzed, Bgl+ bacteria can utilize the released glucose as an energy source. The presence of the active operon is therefore advantageous in environments such as soil where plant-derived β-glucosides are likely to be abundant. Do these β-glucosides also protect bacteria from predators? Sonowal and coworkers studied this very point.

Figure 2. The structure of salicin (left) and saligenin (right). Sources: here and here.

Killing of both slime mold and worms could result from some modification of Bgl+ bacteria due to growth on β-glucosides, something that would make them unpalatable to the predators and cause them to die by starvation. However, toxicity could also be due to a byproduct of β-glucoside metabolism. This latter possibility was supported by several experiments. First, disruption of the bgl operon in Bgl+ bacteria relieved growth inhibition of the slime mold, suggesting that salicin metabolism was required for the toxic effect observed. Furthermore, both slime mold and nematodes could grow when fed Bgl+ bacteria that had been pregrown on salicin and then washed, indicating that the killing associated with Bgl+ bacteria is not due to the bacteria having been modified by growing on the β-glucoside. Lastly, the concentrated supernatant from Bgl+ strains grown on salicin inhibited the growth of the predators, suggesting what caused predator death was a product of salicin hydrolysis.

The degradation product of salicin was identified by thin layer chromatography and NMR of an organic extract of the supernatant of Bgl+ bacteria grown on salicin. The major hydrolysis product was the aglycone saligenin (2-hydroxy-benzyl alcohol). Viability of both the slime mold and the worms was reduced when exposed to saligenin concentrations above 25 mM. The lethal effect of saligenin could be reversed below this threshold of exposure but viability was permanently lost beyond this level. 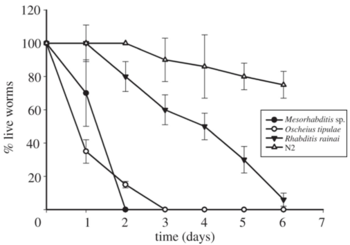 C. elegans is known to exhibit chemotactic responses to bacteria and chemicals in its environment to help it avoid toxic elements. Surprisingly, a chemotaxis assay showed that the worm preferred Bgl+ bacteria growing on salicin or arbutin over Bgl- bacteria or Bgl+ bacteria growing on glucose. Perhaps even more unexpected was the observation that the worms were also attracted to the toxic saligenin. Thus, metabolizing β-glucosides makes the bacteria attractive to the nematodes and, beyond that, exposes the worms to the toxic aglycones. Sounds like quite a defensive set-up for the bacteria.

Saligenin and its derivatives are known to have anesthetic and adrenergic activity and to exert their effects on adrenergic receptors on target organisms. C. elegans contains a Dop-1 receptor encoded for by a gene with DNA sequence similarities to that of the mouse and rat. Indeed, dop-1 mutants of C. elegans were partially rescued from the toxic effect of saligenin, suggesting that saligenin might be recognized by dopamine receptors. In addition, a dop-1 mutant of C. elegans was also resistant to the anesthetic action (as measured by thrashing movement) of saligenin. On the other hand, the mutant did not display any change in its chemotaxis toward saligenin, suggesting that the behavioral response proceeds independently of the Dop-1 receptor. Interestingly, D. discoideum has no dop-1 sequence homologies, thus the mechanism of saligenin toxicity in the slime mold must depend on some other pathway.

All of these experiments were carried out using laboratory strains of bacteria and predators. The investigators now focused on whether these results had ecological significance, i.e., do they matter in the field? In many soil samples tested, Bgl+ and Bgl- bacteria, nematodes and slime molds coexist. Interestingly, natural isolates of other nematode, besides Caenorhabditis, namely Mesorhabditis, Rhabditis, and Oscheius were all inhibited by saligenin, with sensitivity greater in some cases than that in the laboratory strains. All soil nematodes of the genera Oscheius and Mesorhabditis actively avoided saligenin, yet all the wild isolates as well as the laboratory strains of Caenorhabditis showed positive chemotaxis toward it. Thus, E. coli displays two different responses against their predators via β-glucoside metabolism: repulsion of Oscheius and Mesorhabditis species and attraction of Caenorhabditis species. 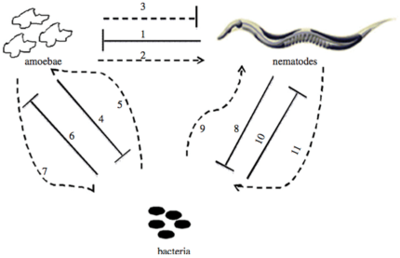 Now for what goes on in the soil. The authors added salicin externally to soil that was seeded with bacteria and nematodes and monitored the effect of its metabolism in situ. When salicin was utilized in the soil by Bgl+ bacteria, the nematode count decreased, but it increased in the presence of Bgl- bacteria. When no bacteria were added to the soil, nematodes did not grow because they became starved. This important experiment shows that saligenin toxicity can be demonstrated in the natural soil environment as well as in the laboratory. Unfortunately, efforts to detect β-glucosides in soil samples were unsuccessful. This is probably because these compounds are transient residents of soil and are rapidly cleared by biotic and abiotic factors.

Along with providing a novel mechanism for the bacterial control of harmful amebas and nematodes this study also suggests why the cryptic bgl operon of the Enterobacteriaceae has been maintained. Its activation provides protection to the bacteria from being eaten. These bacteria in turn can derive nutritional benefits from the predators they kill as well as the glucose released via β-glucoside metabolism. It is of interest to note that these researchers found a modest increase in the expression of the bgl operon in the presence of predator or predator culture supernatant fraction. What is the signal that the predator relays to the bacterium that in turn hastens its own demise? So we’re back to the first question, what controls cryptic genes? But, meanwhile, we have found out that they are good for something mighty important in the life of the bacteria that carry them, constituting a strong selective force for their retention in the genome.