Over the many years that I taught microbiology to medical students, perhaps my least favorite lecture was the one on the “normal flora,” what we now call the microbiome. What used to make me grumpy was that I could talk only in vague generalities, rambling about the intestinal flora being an immunostimulant, a contributor to the host’s nutrition (Vitamin K, choline), a guard against invaders, maybe a source of carcinogens, and who knows what else. The reason for my dissatisfaction was not that the information wasn’t believable or that the experiments were at fault. A lot of good work had gone into it. In fact, some very fine science was done, some going back to the early days of our science. And yet…. 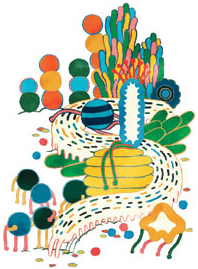 This knowledge was mainly descriptive, not much based on “experiments” in the sense that one exposes a subject to experimental variables and observes their effect. The closest one could come were germ free animals, using conventional animals as controls. But mice and rats aren’t people and this is true in spades for their intestinal physiology. At best, one could get hints about the effect of the “normal flora.” In lecture, I would recount the single (to my knowledge) experiment done with people, the one concerning a boy called David (the “bubble boy”). This story had profoundly tragic aspects, but in truth, I’m not aware that much science came from it.

About halfway along my career at Tufts, the university started a veterinary school and my department was assigned the job of teaching vet microbiology. Before anyone else had a chance, I appropriated the lecture on the rumen. This was an inspired choice because, unlike the problems I encountered teaching the normal biota of humans, the rumen presented me with a collection of articulate stories. I just needed to read some of the great Robert Hungate’s musings. Hungate was one of the pioneers in the cultivation of bacterial strains that were not only strictly anaerobic but exquisitely sensitive to even a hint of oxygen. He and others used their knowledge to uncover rules and patterns for the general strategy used by the rumen microbes: decomposing cellulose and other plant polymers and fermenting the resulting sugars into volatile fatty acids. In the rumen, bacteria and protists interact in complex ways—these are a cow’s main providers of energy. Also, how does the cow get its nitrogenous building blocks? It turns out that the microbes in the rumen are subsequently lysed in the true stomach, in part due to a low pH-resistant lysozyme. Enough said. When it comes to a biological spectacle, the biota of ruminants handily beats that of humans. From lento moderato, the tempo becomes allegro assai.

So, what of today? Would I be happier lecturing on the modern developments of the human microbiome? Yes, of course. There is so much to talk about, centered mainly around the intestine. I could disclose what is known today about the role of its microbiome in nutrition, obesity, other aspects of health and disease, how it is deeply affected by even transient antibiotic administration, and how it needs to be taken into consideration in connection to many medical and surgical interventions. And there is always H. pylori to talk about, even if it’s not in the intestine. Individualized medicine? Well, this is a good reason to study each person’s microbiome. Plenty of good stuff. And for dessert, how about fecal transplants?

But as of now, I would probably not be that much more joyful about lecturing on this topic than in the old days. The information that is already available is not just colossal but truly exciting, yet it’s distinctly work in progress. For one thing, sampling feces is a shortcut that undoes the microbiome’s ecology. The intestine is spatially and temporally complex and sampling its various compartments not easy. As I have said elsewhere, we know little about the microbial consequences of turdopoiesis. So, in a sense, it’s a bit like doing the metagenomics of a tract of jungle without knowing much about the topological relationship of its denizens. But everyone is aware of these issues and for the need of further investigation, so we can be confident that many of the questions arising will be answered. There is a veritable industry out there, staffed by outstanding investigators who are busy at work in this field. Ask me again in a few years.