If one were to ask, “What happens when Salmonella infects the gut?” it might not be obvious that you’d also need to ask, “What time is it?” But indeed you’d need to know the latter to appropriately address the former. An invading Salmonella, intent on setting up camp, is trying to pitch its tent on a landscape that is changing throughout the day. The mammalian gut, like most eukaryotic and some prokaryotic cells, uses an internal timing device to control its physiological functions. The circadian, or 24-h (circa diem, about a day) clock employs an endogenous oscillator to control gene expression, metabolism, and other cellular processes in such a way that individual genes, pathways, and their components ebb and flow in activity with distinctive daily programs, meshing together to execute the enterprise of the cell. Among circadian regulated processes are aspects of the immune system, including components of the inflammatory response. Included are changes in the expression of several inflammation-related (“proinflammatory”) cytokines by macrophages not only in the animal but also ex-vivo. Not coincidentally, Salmonella thrives in the inflamed gut.

Bellet and colleagues set out to investigate the relevance of circadian rhythms of the mammalian immune response during infection by using a mouse model. In this protocol, animals are pretreated with streptomycin, overtly to rid the mouse of much of its intestinal microbiome (this is known as the “colitis model”). Pretreatment with the antibiotic changes the way the mice respond to Salmonella enterica serovar typhimurium, which would otherwise mount a systemic infection more similar to typhoid in humans. The handy mouse colitis model frees researchers from the restrictive and expensive need of using the other established model: cows. The mice pretreated with streptomycin, once infected with Salmonella, mount a massive inflammatory response in the gut, as do humans.

Figure 1. Representative images (10× magnification) of cecal inflammation in WT mice infected (Salmonella) or not at day or night. Source.

The authors asked whether the magnitude of the response and the ability of the bacteria to colonize the gut are influenced by the time of day when mice are infected, and/or the time of day when the measurement is taken—even when the elapsed time of infection is equivalent. Such an outcome would be likely if a temporally regulated inflammatory response is at work. They found that both these aspects are time-dependent. Mice infected in the morning—the beginning of the rest time for these nocturnal creatures—showed significantly higher levels of Salmonella colonization and higher degree of inflammation than those infected 12 hours later in the day. The difference in inflammation between mice infected at 10 AM and 10 PM was especially evident at 72 h post-infection (Fig. 1). As we will see below, the inflammation-related genes show a circadian pattern of gene expression with a peak during the day. Therefore, the time of measurement is important, no matter when the mice are infected. However, the overall magnitude of expression of inflammation-related genes is higher in day-infected than night-infected mice. Mice that carry an altered allele of the Clock gene, or are missing this gene entirely, are perturbed in their circadian rhythms of the immune response and do not show this day/night difference in response to Salmonella infection.

The authors next investigated the potential link between circadian regulation of antimicrobial peptides in the inflamed gut, to which Salmonella is resistant, and improved colonization by Salmonella during the day. Lipocalin-2 is one such peptide that suppresses growth of most bacteria by binding up iron and depriving the bacterial cells of this nutrient. It is expressed to a much higher level during the day than at night. Salmonella, however, has a high-affinity iron chelator, salmochelin, that overcomes the efforts of Lipocalin-2. Hence, Salmonella should have a growth advantage over competing microbes during the day. The authors reasoned that the iroN mutant of Salmonella, lacking the receptor for salmochelin, would be outcompeted by wild-type Salmonella during the day, but that the two strains would be recovered at equal levels when infected during the night. Their experiments supported this prediction. 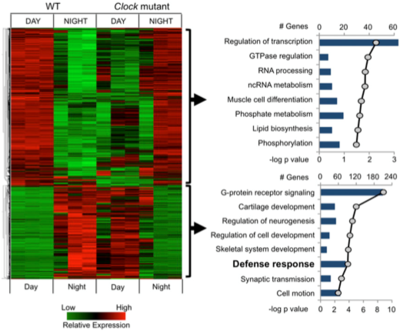 Figure 2. Heat diagram showing changes in gene expression detected by microarray analysis in the ceca of uninfected WT and Clock mutant mice at day (10:00 AM) and night (10:00 PM). Relative increase (red) or decrease (green) of mRNA level is shown. A list of the most represented subcategories of genes, the number of genes included in each subcategory, and the relative P value (solid lines) are shown.

These workers identified clusters of mouse genes whose expression changes under different conditions: day vs. night, a normal host vs. a circadian mutant, with and without infection. In many cases, computational analysis suggested that transcription factors that control groups of immune function genes are regulated by the circadian clock. This analysis provides insights into the connections between the clock and susceptibility and pathogenesis. In the words of the authors: “The results of our analysis point to connections of the circadian clock to other functional systems, including metabolic and immune, during infection and will be instrumental for future studies focused on elucidating these mechanisms.“

These experiments all focused on the role of the mammalian circadian system in responding to infection by Salmonella, but the work also showed that the influence goes both ways. While the host cells are temporally modulating the hospitability of the environment of the invading Salmonella, the bacteria are also influencing circadian rhythms in the host. The authors reported suppression or attenuation of circadian rhythms of expression in metabolism and clock-mechanism genes at the site of infection. They propose that rhythms in immune factors are self-reinforcing, but the powerful signal of an immune challenge disrupts circadian coordination, uncoupling some circadian outputs and resulting in less cohesive and, hence, lower amplitude rhythms. Microbiologists appreciate that bacteria are sophisticated life forms, as are cells lining the intestine, and that the interaction between the two adds additional layers of complexity. Here, the authors show that the situation becomes even more interesting when a bacterium sets its sights on mammalian cells that also watch the clock.

Susan is Distinguished Professor of Molecular Biology at the University of California at San Diego.