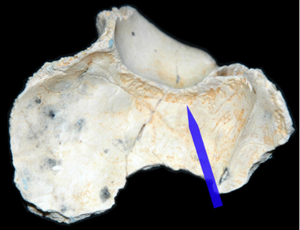 Figure 1. View of the inside of a plaster cast of the skull of a young male Homo erectus from western Turkey. The blue stylus points to tiny lesions 1-2 mm in size found along the rim of bone just behind the right eye orbit. The lesions were formed by a type of tuberculosis that infects the brain. At 500,000 years in age, represents the most ancient case of TB known in humans. Source.

Tuberculosis is an ancient disease that still affects millions of people, largely in developing countries. A startling statistic valued by fundraisers for tuberculosis research is that this devastating disease claims three lives every minute worldwide. Since a major factor underlying this important health threat is the alarming rate at which drug-resistant strains emerge, the search for new therapeutic agents is of urgent concern. The armamentarium currently available for the treatment of tuberculosis is pretty feeble and better drugs are badly needed. Favored targets for antibacterial drugs are the pathogen’s virulence factors (see for example), one reason being that the selection for resistance to such specific inhibitors should be weaker than for –static or –cidal drugs. But beyond that, to understand the infection process we need to have a thorough knowledge of the virulence factors involved and how they operate.

When it comes to the tubercle bacillus (Mtb), the detection of virulence factors has been relatively slow in coming. This organism does not make classical exotoxins, but rather, they give the impression that it is an “existential pathogen,” causing disease mainly by the reactions of the host’s immune system. Surely it isn’t that simple—the bugs are not just inert bystanders. In fact, the list of mycobacterial virulence factors is rapidly expanding to include constituents responsible for host-cell invasion, intracellular replication, escape from the cytosol, stimulation of cytokine formation, killing of host cells, and dissemination. Added to the list are novel secretory mechanisms that allow these factors to escape from the bacteria. So, progress along these lines is being made.

Among Mtb’s key virulence factors are surface adhesins, which include an emerging class, the mannoproteins (see here and here). These proteins bind to lectin receptors on cells of the innate immune system, such as macrophages and dendritic cells. Binding is needed for the bacteria to enter target cells and thus escape the host’s defenses. Liu and coworkers in a recent paper demonstrate that protein-O-mannosylation is critical for Mtb to manifest its full virulence, thus adding to the inventory of the Mtb’s virulence factors.

Post-translational mannosylation of proteins is known to be essential in eukaryotic cells. This reaction is catalyzed by membrane-associated Protein-O-Mannosyl Transferases (PMTs) that hand over mannose residues from lipid carriers to proteins. The Mtb genome carries a putative PMT gene that is homologous to eukaryotic PMTs. The saprophyte Mycobacterium smegmatis also has such a gene and its disruption does not affect growth. But is the protein it encodes involved in O-mannosylation? Looking at SDS/PAGE of culture filtrates, an intense band at 30 kDa in the wild type was downsized to 25 kDa in a mutant, consistent with a loss of glycosylation. Further proteomic analysis of the 30 kDa band revealed it to be fasciclin (FasC, a domain commonly found in extracellular and secreted proteins). When purified, FasC was shown to be decorated by mannose residues only. NMR and electron transfer dissociation analysis of peptide fragments disclosed that glycosylation occurred on adjacent threonine residues within the P30-55 peptide in the wild type, but not in the mutant. About a dozen other M. smegmatis mainly not yet characterized proteins were also O-mannosylated.

Having found out that O-mannosylation of proteins was a widespread activity, even if dispensable for cell growth of the saprophyte M. smegmatis, the researchers turned their attention to the pathogen, Mtb. A mutant in the PTM gene was viable but severely impaired in growth. The mutant did not have added sensitivity to SDS or ciprofloxacin, so the growth defect was probably not due to compromised integrity of the cell envelopes. So, they asked, which proteins of Mtb are involved in O-mannosylation? The authors could not use a global glycopeptidomics approach as used for M. smegmatis because of the enormous concentration of albumin required in the culture medium for Mtb to grow. Instead, they monitored glycosylation defects in an abundant Mtb secreted antigen, Apa (for Ala-Pro-rich Antigen). Ion peptide chromatograms confirmed that two peptides derived from Apa were glycosylated in the wild type but not in an PTM mutant strain. So, disruption of the PTM in Mtb eliminates protein mannosylation, just like in M. smegmatis.

Now for the crucial question: how does inactivation of PTM affect the interaction of Mtb with its host? Since the mutant is defective in growth, its intracellular survival could not be monitored by colony counts. Instead, the researchers constructed fluorescent strains by expressing the gfp gene from a replicative plasmid. They infected cell cultures of murine alveolar macrophages and human monocyte-derived macrophages at a multiplicity of one bacterium per macrophage. The mutant was almost totally unable to proliferate within these cells. To extend these studies to an in vivo infection, they infected immunocompromised SCID mice intranasally with 103 bacteria. Mice infected with the virulent wild type died before 22 days, whereas those infected with mutants survived for 47 days. A complemented mutant strain readily restored pathogenicity of the mutant, confirming that the attenuated virulence of the mutant is associated with the disruption of the Mtb PMT gene.

This research clearly establishes that O-mannosylation of proteins is an essential feature of virulence In Mtb. The authors ponder: “…we speculate that decorations of the Mtb surface and secreted proteins with α1–2 linked mannobioses mimicking the high mannose branch motifs of the eukaryotic intracellular glycoproteins are not fortuitous and may be crucial for Mtb to establish effectively parasitic relationships with its eukaryotic hosts.” Such findings are important both from the standpoint of basic knowledge concerning the pathogenicity of this bacterium and also open a window for potential development of novel strategies to control the spread of this raging disease.