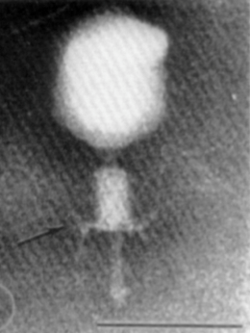 A side view of a negatively stained T4 particle whose sheath has contracted. Its base plate has the boat-type profile characteristic of baseplates seen in longitudinal sections of T4 particles adsorbed on host cells, i.e., the tips of the baseplate such as that shown by the arrow are tilted toward the head. A short tail fiber extends downward from the flat part of the baseplate near the arrow while the long kinked tail extends upward from opposite tip of baseplate.  Source.

Electron microscopy of phages came into prominence in the 1950’s and revealed many of their physical attributes such as their particulate nature, morphological complexity, “tail first” attachment to host cells, etc. Among these discoveries was that T-even coliphages contract their tail upon absorption to their E. coli hosts. A 1967 paper by Simon and Anderson reveals this process in splendid detail. The legend of this figure tells the story.

We are used to seeing well-nigh incredible images taken via the electron microscope, but this one tells us that the early days were not lacking in technical sophistication. Far from it, the clarity of the images approaches that available today. See the paper for other examples of this. The difference between now and then is mainly in the tools available for the analysis of the images. Keep in mind, this work anteceded the availability of practical personal computers by about 10 years.