I offer this as an echo to Elio's post from last October, Teaching E. coli to Endocytose. There Elio reported the recent education of  E. coli by the heterologous expression of a mammalian gene. I tell of a bacterium instructed by a phage. 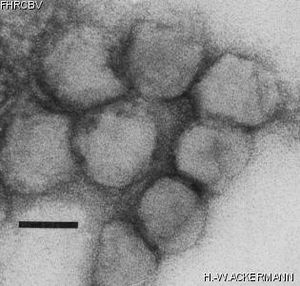 Apparently Pseudomonas phage φ6 missed that classic 1952 paper by Hershey and Chase. You know, the one where they radiolabeled either T2 or T4 phages with P32 and S35, mixed them with susceptible E. coli as hosts, let the phages adsorb and begin the infection, then whirred them in a Waring blender. The P32-labeled DNA entered the host cells, while the S35-labeled capsid proteins remained outside. This became the paradigm for phage infection, slightly tempered later to accommodate the entry, along with the genome, of various 'internal proteins' that had been packaged inside the capsid. However, for eukaryotic viruses that have double-stranded RNA (dsRNA) genomes, it's a whole different story. Literally. The whole capsid enters the cell. I discussed some of the benefits of this strategy in my post about the 'viral turtles' that infect yeast. Most dsRNA viruses rely on the host to take up the virion by endocytosis. Since Bacteria, it is widely believed, don't endocytose, this would seem to preclude phage virions from playing this game. But apparently phage φ6 missed this injunction, too.

Phage φ6: From Virion to Nucleocapsid

Figure 2. Schematic drawing of the φ6 virion. The three genomic segments of dsRNA are packaged within an inner capsid that is surrounded by a outer capsid lattice. The entire particle is then enveloped by a lipid membrane. Source.

Meet φ6, a smallish (85 nm) icosahedral phage with a dsRNA genome that infects the plant pathogen Pseudomonas savastanoi pv. phaseolicola. It is the model phage for the family Cystoviridae, a group distinguished by their multipartite genomes composed of three segments of dsRNA genomes and their complex virions that are surrounded by a lipid membrane. Since φ6 infects a Gram-negative host, it needs to surmount three obstacles: the outer membrane, the labyrinth of peptidoglycan within the periplasm, and then the cell membrane itself. Different components of the φ6 virion facilitate each of these steps.

The Cystoviridae are unusual in possessing an outer lipid envelope; for the other phages that have lipids associated with their virions, the membranes form an internal layer (for example, Tectivirus PRD1). External lipid membranes are characteristic of animal viruses that acquire this wrapping as they bud from the membrane of the host cell. In contrast, the membrane of φ6 is added as the capsids assemble within the host cytoplasm. The lipids of φ6 are provided by the host, but all of the proteins in its membrane are phage-encoded and assist during infection. One of them (P3) forms a spike that adsorbs to the host pilus, φ6's receptor. The phage keeps its grip as retraction of the pilus ushers it through the host's EPS (exopolysaccharide) layer to the cell surface. Then another membrane protein (P6) mediates fusion of the phage membrane with the host outer membrane. This step neatly delivers the naked phage nucleocapsid (NC) into the periplasm without any messy leakage of the periplasmic contents. The NC of φ6 is a complex structure, 56-58 nm in diameter, composed of inner and outer protein capsids with the genomic dsRNA inside.

The next challenge facing the NC is how to penetrate the jungle of peptidoglycan. Easy! φ6 simply digests a clear path to the cell membrane using a lytic enzyme (P5) exposed on the outside of its NC. This enzyme is essential. If it is inactivated by pretreating virions at high temperature, φ6 still enters the periplasm but it gets no farther. In the lab, virions can be converted into NCs by removing the lipid envelope using Triton X-114, a non-denaturing detergent. These NCs can't infect normal P. syringae cells because they can't get past the outer membrane. Offer to them instead energetically active spheroplasts that lack an intact outer membrane, and they launch productive infections. 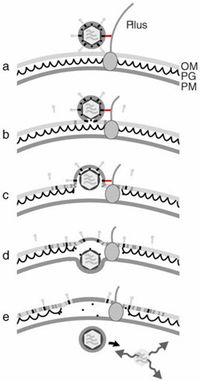 Figure 3. Model of φ6 entry pathway. (a) One of the virion spikes (highlighted in red) composed of protein P3 adsorbs to the side of a host pilus. (b) Pilus retraction (indicated by the shortening of the line representing the pilus) brings the virion into contact with the host’s outer membrane (OM). The fusion of the phage envelope and the OM (mediated by P6) deposits the NC in the periplasm. (c) A phage-encoded lytic enzyme (P5) on the NC surface locally digests the peptidoglycan (PG) barrier, which brings the NC into contact with the host’s plasma membrane (PM). Based on EM data of arrested infections, penetration of the NC particle into the cytosol takes place via a membrane invagination (d) and an intracellular vesicle (e) from which the phage core is released by an unknown mechanism. The core then transcribes mRNAs that are released into the cytoplasm. Source.

After tunneling through the peptidoglycan, the NC comes face to face with the cell membrane. Entry of a particle of that size into a cell ('internalization') suggests endocytosis, but bacteria don't 'know' how to endocytose! However, with φ6 in control, P. syringae manages. Key to this is the phage's outer capsid that forms the surface of the NC. This layer is a simple lattice composed of only one protein (P8). When researchers removed it from the NCs, the modified NCs could no longer infect spheroplasts. It is thought that interaction of P8 with the cell membrane imposes the curvature that creates the endocytic invagination which prompts this membrane to pinch off and form vesicles. Internalization of both animal viruses and phage NCs is an active process. This entry step requires a normal membrane potential. Figure 4. Electron micrographs of the arrested infection of P. syringae spheroplasts by φ6 NCs. Arrowhead indicates an NC within an invagination, but still outside the cell membrane. Bar = 100 nm. Source.

Actually observing the internalization of φ6 via TEM has proven difficult. During normal infection, it happens in a flash. Viewing this process calls for synchronously infecting host cells. However, the NCs don’t all arrive at the cell membrane at the same time, mainly because the time required for pilus retraction is quite variable. A couple of tricks have been used to get around this problem. One is to work with spheroplasts and NCs, thereby eliminating the earlier asynchronous steps. Another is to treat host cells with various energy depleting agents (e.g., sodium azide or the protonophore CCCP) prior to infection. When researchers added φ6 virions to energy-arrested cells, the virions fused with the outer membrane and penetrated the peptidoglycan as usual, then accumulated at the cell membrane. Some were seen to lie within membrane invaginations, but still outside the cell membrane. When the inhibitory drugs were removed, NC-containing vesicles pinched off from the invagination and infection proceeded in the recovered cells.

The NC, trapped inside a vesicle, hasn't yet entered the cytoplasm. How φ6 escapes the vesicle is not known, but likely involves vesicle membrane disruption by the same outer capsid protein, P8. During the process, P8 is degraded, thus destroying the outer capsid. The remaining inner capsid (47 nm diameter) enters the cytoplasm intact. In this respect φ6 behaves like other viruses with dsRNA genomes. Be they eukaryotic viruses or phages, all retain a protective protein capsid around their genome so that the dsRNA is not detected—and destroyed—by the host. The φ6 genome, still enclosed within the inner capsid, then begins transcription and replication.

But Is This Endocytosis?

Perhaps you consider φ6's crossing of the cell membrane to be endocytosis, perhaps not. Either way, I see a different take home lesson. To me, this tale, like Elio's about vesicle production in E. coli, suggests that there is no intrinsic limitation preventing invagination and vesicle formation by bacterial membranes. These membranes seem poised on the brink, requiring only a small step to trigger the process. This raises the question of why no Bacteria have been irrefutably shown to have taken that step and exploited the process for their own purposes. I imagine that they simply found little use for it. To be useful might require the whole package—the complex intracellular networks of tubules and vesicles that characterize the eukaryotic cell. Please post a comment if you have thoughts on this.