Every day we see animals migrating through the air, across plains, and in the oceans, in beautifully coordinated patterns; starlings flock together in the thousands while sardines swim together in enormous shoals. These social behaviors are important in allowing animals to socialize, avoid predators, and find refuge and food. But what about smaller organisms? Although more difficult to visualize, microorganisms can perform these coordinated behaviors as well. As is true for birds and fish, figuring out how and why bacterial cells communicate to organize their movements will help understand the behavior of bacteria in the environment.

Figure 0. Ripples on the Camas Prairie of northern Montana. Source.

Myxococcus xanthus is a soil dwelling microbe that has attracted the attention of microbiologists in part due to its predatory activity. To survive in environments where nutrients are scarce, it kills and breaks open other bacteria and feeds on the released nutrients. During times of starvation, M. xanthus cells self-organizes into fruiting bodies, macroscopic dome-shaped mounds that contain over 100,000 cells each. In these structures, the cells differentiate into metabolically inactive spores that remain dormant and allow survival until times get better. Since the 1960s, M. xanthus cells have also been known for organizing their movements across a solid surface to produce waves; this phenomenon, called rippling, resembles the waves produced when you throw a rock into a pond, and can be seen in nature on a scale ranging from the microscopic to the geologic. 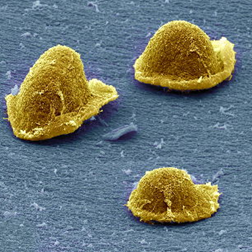 Rippling patterns can be seen during two major stages of the M. xanthus life cycle, development of the fruiting bodies and predation. How do these single-celled organisms know to start rippling and why is it seen during both stages? It was originally proposed that rippling during the development stage was due to the display of a starvation-induced signal protein CsgA on the surface of a cell. When the pole of one cell collides with the pole of another cell as they move through a medium, CsgA interacts with an unknown receptor on the neighboring cell. This pole-to-pole exchange allows cell surface information to be exchanged as cells swim, herd-like, through the media. As the levels of CsgA within the community rise, the first ripple is induced, leading to aggregation and fruiting body formation. However, to date no known receptor for CsgA has been found, nor does the action of CsgA explain why rippling occurs during predation.

A study by Berleman et al. attempted to shed light on the cause of rippling behavior in M. xanthus during both stages. Through predation assays, they demonstrated that rippling is associated with the presence of the prey and of macromolecular substrates, such as polysaccharides and peptidoglycan, that are released by the death of the target cells. The movement of M. xanthus cells across a solid surface such as agar is known to be modulated by the chemotaxis-like frz pathway. These authors, along with others, noted that when M. xanthus cells move through an environment that lacks prey or lysis debris, the pattern is tangled and unorganized. But in the presence of prey, the same frz pathway directs cells to organize into nearly parallel lines that move in a more coordinated fashion. Mutations in the frz pathway caused M. xanthus to abandon its prey prior to complete lysis, suggesting that this organism alters its motility when in the presence of prey or of macromolecules related to dying prey. 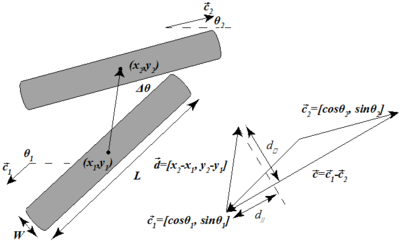 More recently, Zhang et al. have been further intrigued by bacterial social development and by advances in technology that have permitted further quantitative studies of the rippling behavior. A reevaluation of the pole-to-pole model was stimulated by the discovery that the frz pathway proteins FrzC and FrzD appear to stimulate side-to-side contact during vigorous predation. These authors used Agent-Based Modeling (ABM) in conjunction with fluorescence microscopy to investigate rippling mechanisms during predation. ABM is a computer program that allows modeling of how cells interact with one another and their environment based on experimental observations. This is not a simple matter and it’s understandable that it appeared in the journal PLOS Computational Biology. To give a flavor of what’s involved, we include the first of their figures from the rather detailed Supporting Information. This method revealed that M. xanthus cells use a side-to-side contact-mediated signal to self-organize. Signally of this type uses receptors located along the axis of a cell to induce rippling, similar to mechanism proposed by Berleman et al. of intercellular signaling induced by the presence of prey macromolecules.

With a better understanding of the mechanism of rippling we can now address the physiological role of rippling during development and predation. Zhang et al. developed three predictions based on their result: 1) side-to-side signaling increased the efficiency and rate with which cells can spread over prey cell and lysis debris; 2) rippling causes individual cells to bounce back and forth off of one another, producing an oscillating motion that ensures the entire community moves over an area containing nutrients; 3) rippling allows M. xanthus cells to remain longer in an area containing prey or macromolecules for longer periods. They concluded that the overall effect of rippling is to more effectively cover an area of a prey, more like a thick cellular blanket than a disordered pile. This would certainly provide a competitive advantage over other cells for access to available nutrients.

Figure 3. Comparison of ripple initiation in the ABM simulations (top panels) and experiments (bottom panels).The initial time (0 hrs) corresponds to the initiation of the simulation with a uniform cell distribution or the time M. xanthus cells fully cover the prey in the field of view. The fields of view of both the ABM simulation images and experimental images have the same dimensions; the scale bar is 100 µm.

Despite the many efforts to determine why different cellular growth patterns are observed and how bacteria communicate to form them, there still remain large gaps in our knowledge. Understanding cellular communication beyond quorum sensing, as in the case of rippling, would help us understand how community behaviors benefit the individual cell. Ultimately, controlling community behavior could help us to harness important bacterial processes for industry or develop new strategies to prevent harmful biofilm colonization. Furthermore, the authors state “This type of combined approach is essential to further our understanding of self-organization in more complex systems such as development of multicellular organisms.”

Melissa is a graduate student at the University of Akron where she has been mentored by Hazel Barton.