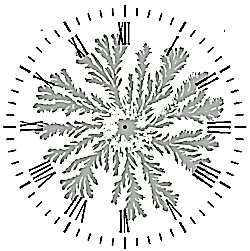 As humans we live our lives in 24-hour increments—waking, eating, and sleeping at specific times dictated to us not solely by our discerning willpower, but also by the greater underlying persuasion of our circadian rhythm. Based on the earth’s rotation from day into night, we have internalized a deeply rooted clock that drives how we behave in response to our genetic expression patterns. It’s not hard to imagine that several other organisms respond to an internal sense of time. Sure enough, the 24-hour circadian rhythm is a highly conserved behavior—from complex mammals down to plants, fungi, and cyanobacteria. Interestingly, there are also examples of different temporal rhythm patterns—ranging from years and seasons to minutes and seconds. A curious example is that of the bacterium Paenibacillus dendritiformis, which seems to have its own internal clock of a mere 20 seconds.

A Short Rhythm for a Long Rod

P. dendritiformis is a long, rod-shaped, gram-positive bacterium found in many different environments from soil samples to human skin. It successfully navigates crowded microbial environments through its social skills. P. dendritiformis socializes and migrates alongside its brother cells in a behavior called swarming. Additionally, this microorganism has a very specific periodicity in its movements over hard surfaces—it changes direction every 20 seconds.

Why is this exciting? Although the motility of bacteria in liquid media has been studied extensively, scientists are just starting to understand how bacteria use their flagella to also move on the top of solid surfaces, which is known as swarming. Interestingly, swarming colonies show an advantage over liquid cultures in having increased resistance to antibiotics and a propensity to become pathogenic. There is also evidence for a complex regulatory system that simultaneously controls swarming and biofilm formation through quorum sensing and other molecular signals. Thus, the study of swarming behavior has become a hot topic among microbiologists.

A combination of factors has been shown to affect swarming behavior. Hydrodynamic interactions play a significant role in this social form of migration, based on strong steric interactions including cell-cell and cell-environment contact. Cellular orientation also plays a role in colony motility; clusters of cells with a high orientation have high swimming speeds while disordered regions have slower speeds. Nutrient level, oxygen level, surface rigidity, and temperature variations have all been shown to affect swarming behavior.

The technical definition of swarming involves the flagella-mediated migration of bacterial cells together, including “run and tumble motion” and can involve complete directional reversals. “Run and tumble” refers to periods of smooth continuous movement followed by a quick reorientation of the cell by flagellar turnabout or simple Brownian motion. Several species such as Myxococcus xanthus, Halobacterium slainarum, and Acetobacter xylinum are observed to have periodic reversal times, however they do not use flagella as their motive organelle. Only one flagellated rod bacterium, Paenibacillus dendritiformis, has been reported to participate in periodic reversals. An equally talented cousin of P. dentritiformis, P. vortex, has been described in this blog before. 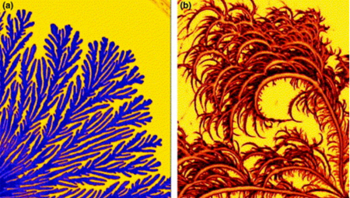 P. dendritiformis has two morphotypes: the tip splitting (T) and the chiral curling (C) morphotypes. The colonies of this bacterium can switch morphotypes spontaneously, which results in a change in colony spreading patterns on agar. Be’er et al. say the cells of the C morphotype have a division “defect” that causes them to grow longer than T morphotype cells, thus changing the hydrodynamic interactions between cells and surface, although this “defect” could potentially be a regulated occurrence. At the very least, this C morphotype has survived selection because it continues to expand the colony’s front lines, pulling the population toward new—and potentially favorable—conditions. Along with creating beautiful quasi-psychedelic patterns on agar plates, the C morphotype has another definitive feature: it consistently changes direction every 20 seconds, independently of its neighbors and environment. 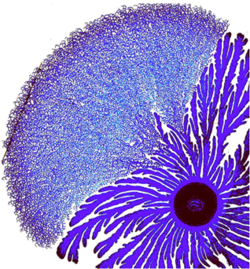 P. dendritiformis morphotype transition. The growth starts from a drop inoculation (the dark blue circle) and after two days of growth a random burst of chiral morphotype is observed. Source.

Be’er et al. set out to find what might cause the C morphotype to change the periodicity of its reversals, but found that reversal period stayed at a constant 20 seconds regardless of nutrient level, agar rigidity, surfactant additions, cell length, humidity, temperature, food chemotaxis, and oxygen level. The bacteria changed directions every 20 seconds as long as the bacterial cells were moving and alive. The incredible independence of reversal times from environment suggests an extraordinary and robust internal clock—but for what benefit? Could these random reversals expand the randomness and the likelihood of finding new, beneficial environments? This is the first time researchers have seen a new swarming motility behavior: periodic reversals in very long and rigid flagellated bacteria.

Even more interesting is that P. dendritiformis cells grown in standard LB broth exhibited an entirely different motion than their agar grown cousins: they swam along nearly straight trajectories with no reversals or run and tumble movements. Agar-plated bacteria contain an average of 100 flagella per cell. Under closer examination, the liquid cultured cells differed in flagellation, and instead contained only a single bundle of 4 flagella located at one pole. This is exciting evidence that extracellular conditions have a huge influence on the number and position of flagella on the cells—which in turn influences whether or not the cell has periodic reversals.

So what can be causing this internal 20 second clock in P. dendritiformis? Be’er et al ruled out a signal transduction mechanism along the cell membrane claiming that the rest time (period of no motion between reversal of direction) would be correlated with the cell length. No such correlation was seen. Even if there was a membrane signal transduction, Be’er calculated that this signal would be faster than fast calcium waves—making it a highly unlikely possibility.

Why Do They Do It?

Ultimately, the evolutionary advantage and mechanism of this periodic back and forth remains a mystery. Perhaps this kind of social behavior unites a multitude of individuals into a single multicellular entity that can fight for space and survival on a surface inhabited by dense populations of competing microorganisms. Is it possible that P. dendritiformis uses both its strength in numbers and random assessment of the surroundings to its advantage in hostile and competitive environments? Either way, the description of a new type of flagellated swarming in rod-shaped bacterium is an exciting addition to the study of swarming behavior and may give scientists insights into how such social behaviors contribute to biofilm formation and increased antibiotic resistance. Just as humans beat their drums to a rhythm, so do these microbes—it’s just a different beat.

Monika Buczek is a Ph.D. student in Molecular, Cellular, and Developmental Biology at the City University of New York.