The delightful word 'oocyan' refers to the trait of blue-green eggshell color that occurs in native chickens of Chile (Mapuche fowl) and some of their descendants in North America and Europe, as well as certain Asian chicken breeds (e.g. Dongxiang, Lushi).

Oocyan is an autosomal dominant trait, and recent papers in PLoS Genetics and PLoS ONE have established that it's occurrence in chickens from different geographical regions is due to an endogenous retrovirus (ERV) insertion upstream of the SLCO1B3 gene [1, 2].

Remarkably, the ERV insertions responsible for oocyan appear to represent separate integration events in Chinese versus American/European chicken breeds - thus it appears that the oocyan phenotype has evolved on two separate occasions, via the same ERV-mediated mechanism, in distinct populations of chickens. 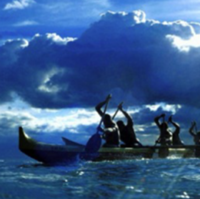 Two long-debated issues among prehistorians are whether there was a pre-Columbian introduction of chickens to the Americas, and whether ancient migrations led to Polynesian contact with South America.

The wild ancestor of the domesticated chicken is the red junglefowl, a South East Asian species. Archeological evidence indicates that domesticated forms of this species had been introduced to China by around 5000 years ago, and were present in Polynesia approximately 1000 years ago.

But how and when did chickens reach the Americas? It is likely that Portuguese and Spanish colonists introduced chickens to the East coast of South America in the 15th century. However, when Francisco Pizarro reached Peru in 1532, he found that chickens were an integral part of Incan economy and culture, suggesting that the species had already been present in the region for a substantial period of time. Consequently, pre-European introductions of chickens to the West coast of South America, involving both Asian and Polynesian contacts, have been proposed [3]. 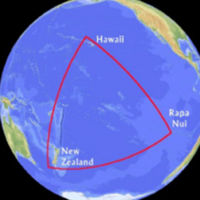 The "Polynesian Triangle" - South America (lurking bottom right) may have been within reach for the inhabitants of Rapa Nui.

It has been suggested that American blue egg-laying chickens (gallinas Mapuches, or “Araucanas” to poultry enthusiasts) are descended from pre-European stock bred by the Mapuche people of Southern Chile.

Historical evidence for the oocyan phenotype indicates that it has been present for at least 500 years in Chinese chickens, thus it might be argued that oocyan Araucanas derive from an ancient Asian stock that found its way into America via Pacific migrations. However, it now appears that the oocyan Asian genotype is distinct from that in Mapuche chickens, and has remained confined to China.

These findings indicate that the presence of blue eggs in Mapuche fowl did not involve the introduction of oocyan birds from Asia. However, this does not preclude the possibility of an Asian/Polynesian introduction of chickens to South America, which is now supported by a limited amount of archaeological evidence [3].

The EAV-HP group of endogenous retroviruses

Perhaps just as remarkable as the fact that independent ERV insertions have twice generated the oocyan phenotype in chickens, is the fact that both cases involved the same group of avian ERVs - a group called EAV-HP. 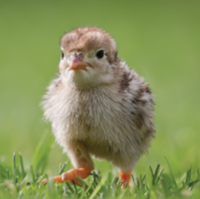 EAV-HP is found in various species of the genus Gallus, and chicken genomes typically contain 10 to 15 copies [4, 5]. EAV-HP first came to prominence when it became clear that avian leukosis virus subgroup J (ALV-J), an avian retroviral pathogen that emerged in the late 1980s, arose through a recombination event in which the envelope gene of EAV-HP was acquired by an exogenous ALV. ALV-J has since spread to become a worldwide animal health and welfare problem, and in recent years has caused significant economic losses in commercial flocks.

The role of ERVs in avian genome evolution

Oocyan is not the first example of an ERV-mediated phenotype in birds. An insertion of avian leukosis virus (ALV) in intron 4 of the tyrosinase gene results in the recessive white plumage of some chicken breeds [6]. Late-feathering and 'henny-feathering' have also been linked to retroviral insertions [7, 8].

A recent study of ERV diversity in avian genomes found that a quarter of chicken ERVs are within or near cellular genes, and many are found in promoters and introns [9]. Furthermore, 77% of intronic integrations were in the sense reading frame, suggesting that they might alter gene expression through the insertion of promoters, splicing signals, or polyadenylation sites.

As genetic studies progress, it should be possible to further elucidate the role of ERVs in shaping phenotypic diversity in chickens and other birds.