Gone are the days when bacteria were thought to just grow and divide and not bother to converse with one another. That simple idea has produced mountains of data and most of what we know about bacterial physiology is based on this notion. It turns out, as we know now, that this is an oversimplification. Lots more goes on in the life of bacteria, much of it dealing with communication with other cells. One widespread, if menacing-sounding, mode of communication consists of killing individuals of a population, apparently for the benefit of other of its members. A prevalent mechanism that accomplishes this is the toxin-antitoxin system for programmed cell death. Here, some seemingly altruistic cells are killed from within whereas others get dispatched after receiving extracellular signals. A lot is known about both mechanisms, this being a very active field of research. The signals involved are the subject of this piece. 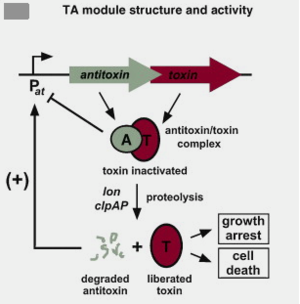 Figure 1. Toxin–antitoxin (TA) module. Antitoxins bind their cognate toxins and inhibit toxin activity. In E. coli, the toxin is activated by degradation of antitoxin either by the Lon or the ClpAP protease. Activated toxins inhibit cell growth and/or lead to cell death. Source.

Many, possibly most bacterial genomes carry toxin-antitoxin modules consisting of two genes in an operon, one that codes for a stable toxin, the other for a labile antitoxin. When the antitoxin vanishes for whatever reason, the toxin can go to work and kill the cell that made it or, through extracellular signals, induce the killing of adjacent cells. Most bacteria contain multiple versions of these modules. Bioinformatic analysis of the tubercle bacillus genome has come up with an astounding 88 putative toxin-antitoxin candidates!

A widely studied system (and the earliest discovered in a bacterial chromosome) is mazEF in Escherichia coli. Stressful conditions that turn off the expression of the mazEF module result in reduction of antitoxin MazE within the cell, allowing toxin MazF to act freely. Such conditions include inhibition of transcription and/or translation, severe amino acid starvation leading to overproduction of the alarmone ppGpp and DNA damage. Engelberg-Kulka’s laboratory, where this phenomenon was first discovered in the bacterial chromosome (it had been found earlier in plasmids by Yarmolinsky) had shown that mazEF-mediated programmed cell death is triggered in other cells of the population by an extracellular quorum sensing factor, EcEDF (for E. coli Extra-Cellular Death Factor). It was identified as the fairly simple pentapeptide NNWNN and acts as a quorum-sensing molecule. In the present report, Kumar and coworkers now extended this story to other species, investigating the EDFs of Bacillus subtilis and Pseudomonas aeruginosa.

Prior work had shown that in E. coli mazEF-mediated cell death takes place in dense cultures and that the supernatant from such a culture induced cell death when added to dilute cultures of E. coli. Now, supernatants from B. subtilis and P. aeruginosa were added separately to dilute E. coli cultures that had been treated with rifampin to induce mazEF. Both the B subtilis and P. aeruginosa supernatants killed these E. coli cells. Thus, both B. subtilisand P. aeruginosa supernatants contain EDFs. To purify them, the authors ran supernatants through high performance liquid chromatography (HPLC). The only compound (BsEDF) isolated from B. subtilis turned out to be a hexapeptide with the amino acid sequence RGQQNE. Three active compounds were isolated from P. aeruginosa, the nonapeptide INFQTVVTK (PsEDF-1) and the hexadecapeptides VEVSDDGSGGNTSLSQ (PsEDF-2) and PKLSDGAAAGYVTKA (PsEDF-3). Synthetic identical peptides also displayed EDF activity.

Figure 2. The effect of the supernatants from dense cultures of B. subtilis or P.aeruginosa on mazEF-mediated cell death in E. coli. Wild-type and ΔmazEF E. coli cultures were not diluted (Dense) or diluted to a density of 3 x 104 cells/ml in M9 medium (M9) or in a supernatant of a dense culture (SN) of B. subtilis or P. aeruginosa. The samples were incubated without shaking at 37°C for 10 min and for another 10 min with rifampin (10 µg/ml). Source.

Programmed cell death in B. subtilis is mediated by the ydcDE operon that codes for a toxin-antitoxin module and belongs to the mazEF family. The authors found considerable cross-talk, as each of the EDFs from E. coli, B. subtilis or P .aeruginosa added separately to dilute cultures of B. subtilis resulted in ydcDE-mediated cell death. Next, they determined which amino acids of BsEDF are essential to cause cell death. The first (arginine) was not required to kill E. coli, but the second one (glycine) was essential. To kill B subtilis, however, glycine, the third (glutamine), fourth (glutamine) and sixth (glutamic acid) amino acids were absolutely required, and the fifth (asparagine) partially required.

How Does the Toxin Work?

It has been known that MazF works as an endoribonuclease by cleaving RNA and that EcEDF enhances this activity. Would BsEDP and each of the PsEDFs also enhance MazF endonucleolytic activity in E. coli? The authors assayed this activity using a continuous flurorometric assay with substrates consisting of one or five RNA bases flanked by DNA nucleotides labeled with a fluorophore at their 5’ ends and a quencher molecule at their 3’ ends. Processing of such a substrate leads to a great increase in fluorescence. Adding BsEDF or any of the PsEDFs led to a concentration-dependent enhancement of MazF activity. The PsEDFs were, however, less efficient than EcEDF or BsEDF. Which amino acids in BsEDP are critical to stimulate MazF activity in vitro? These workers found that the second (glycine) and fifth (asparagine) amino acids are absolutely required, whereas the fourth (glutamine) and sixth (glutamic acid) are partially required and the first (arginine) and third (glutamine) acids are not necessary. Thus, for both the in vivo effect of BsEDF on cell death in E. coli and the in vitro effects of BsEDF on MazF activity, the second and fifth amino acids (though different) are absolutely required and the first amino acid is dispensable.

Figure 3. BsEDF and the PaEDFs enhance the in vitro MazF endoribonucleolytic activity. (A) How the endoribonucleolytic activity of MazF was measured. Cleavage of the chimeric fluorescent oligonucleotides by MazF increases fluorescence emission of the fluorophore FAM. (B) The time course of the effect of BsEDF (RGQQNE) on MazF activity (Left panel). The relative (%) increase of MazF activity induced by BsEDF (Right panel). (C) Ditto for the effect of PaEDF-1 on MazF activity. Source.

Using affinity columns, the authors showed that BsEDF binds directly to MazF but not to MazE. The BsEDF mutant with alanine substituted for glycine in the second position did not bind to MazE. Previously, work from this laboratory showed that EcEDF can overcome the antagonistic effect of the antitoxin MazE on the E. coli MazF toxin, thus freeing the toxin from its inhibitor and enhancing its activity. The way this works, it is thought, is by EDF displacing MazE from the MazE-MazF complex. Would BsEDF and PsEDFs also do this? BsEDF did overcome the inhibitory effect of MazE on MazF, but none of the PsEDFs displayed this activity. However, EcEDF was more efficient than BsEDF in overcoming the inhibitory effect of MazE. The same amino acids of BsEDF were required to overcome the inhibitory effect of MazE and for stimulating the E. coli MazF activity in vitro.

A variant form of EcEDF with the sequence NNGNN (named EciEDF) interferes with the ability of WT EcEDF to stimulate the activity of E. coli MazF. Likewise, the variant BsEDF, RAQQNE (named BsiEDF) interferes with the enhancement of E. coli MazF activity by WT BsEDF. Importantly, they found that iEDFs from each species prevented the activity of the EDF of its own species but not that of other species. This result strongly suggests that EDFs from E. coli, B. subtilis and P. aeruginosa interact at different sites on E. coli MazF.

All In The Family?

In E. coli, the quorum-sensing peptide EcEDF triggers a MazF-induced downstream pathway that leads to death of most of the population, leaving a small subpopulation to survive. It is interesting to note that in contrast to the situation in E. coli and B. subtilis, cell death mediated by P. aeruginosa is population-independent, suggesting that its EDFs are used to kill other bacteria but not itself. The present study of EDFs from B. subtilis and P. aeruginosa indicates that programmed cell death is a much broader phenomenon that also involves interspecies killing and that could play a major role in the regulation of mixed bacterial populations. As the authors say: ” ….the production and the role of the QS EDF peptides in interspecies bacterial cell death predicts the existence of an ‘EDF family’ that would also be found in other bacterial species.” An exciting ramification of this research is the possibility of using EDFs as a novel class of antibacterial agents. Could this spell welcomed troubles for those hard-to-treat multiple antibiotic-resistant strains?