Recalling the Good in the Good Old Days 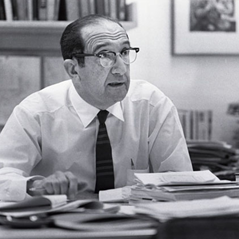 In its early days, ca. 1945-1965, molecular biology was a particularly collegial undertaking, characterized by free sharing of research data and a relative lack of egotistical behavior. The reason for this marvel may well have been that there was so much to discover—so many low hanging fruits—that there was room for everybody and enough money for the pursuit. This was a special period in the history of science, not only because stunning discoveries were made with great frequency, but also for the way science was done.

Here is an example of selflessness that I witnessed in person. In 1961 I was a faculty member at the spanking new medical school of the University of Florida. These were not ordinary times. A period of just a few years saw the discovery of the semiconservative replication of DNA by Meselson and Stahl, the postulation of the operon model by Jacob and Monod, and the elucidation of the genetic code by Nirenberg and Matthaei. In a moment of hubris, our faculty invited the future Nobelist Salvador Luria to visit and give a seminar on his research. Luria was one of the founding father of this new science, having made stellar contributions to microbial genetics. His name is associated with the Luria-Delbruck experiment that established with simple clarity that mutations were not induced by the environment but rather occurred at random. Luria’s acceptance of the invitation was a great moment for us.

We went as a delegation to our little airport and waited for the great man to come down the small airplane’s flight of steps and sample the Florida air. Now, we knew that Luria was a person of strong views, not one to hold back his opinions, but we were scarcely prepared for his first pronouncement. On looking around, he blurted out, “I hate palm trees!” So there! Having swallowed that one, we proceeded directly to the auditorium where he was to talk. We had managed to assemble a large crowd for this presentation, including medical and other students. The spacious hall was packed.

Luria ascended to the podium, took out some papers and said something to this effect: “I was going to tell about my work, but I just received a manuscript from Paris that deals with far more important results, so I will talk about that instead.” The work he chose to talk about, done at the Pasteur Institute by Brenner, Jacob, and Meselson, provided definitive evidence for the existence of mRNA. I can't recall ever again witnessing that—a speaker deciding that because of its importance, someone else’s results trumped talking about his own. But unusual as this action was, it seemed entirely in keeping with the spirit of the time. Can you imagine someone carrying out such a gesture nowadays?