Microbiology, we will agree, is a vast subject where many important aspects are likely to evade one’s sight. Here’s an example—the formation of vesicles from the outer membrane of Gram-negative bacteria. This phenomenon, known as vesiculation, is widespread and noteworthy for enhancing our understanding of bacterial capabilities and for its potential applications. My guess is that many microbiologists, like myself until recently, have only a hazy notion of it.

Let me set this in context. Bacteria have evolved a panoply of tactics for communicating both socially and antisocially with most anyone, be they other bacteria or cells of their host. For this they deploy small molecules (active only above a critical threshold concentration, hence quorum sensing), they construct pili to translocate DNA, and they export proteins via more than a half dozen secretory systems. Each of these tactics requires its own mechanics and makes its own demand for energy. Secreting proteins freely into the environment is particularly wasteful of resources because few of the molecules are likely to reach their intended target. To improve the odds, some bacteria depend on making direct contact between donors and recipients before exporting. Others parcel out the molecules inside specialized delivery structures—the subject of this post. 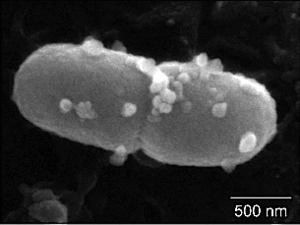 Vesicles On The March

Many, possibly most of the Gram-negative bacteria produce extracellular vesicles from their outer membrane (OM). These blebs, usually called outer membrane vesicles (OMVs), are spherical structures typically 20 to 200 nm in diameter formed by the outward protrusion of small bits of the OM that then pinch off to release the vesicles into the environment. Thus formed, the OMVs are bounded by a double-layered membrane with the usual OM protein, lipid, and lipopolysaccharide (LPS) constituents, and carry within them proteins from the periplasm. While details of the mechanism of vesiculation are yet to be elucidated, here’s one exciting example: The Pseudomonas aeruginosa signaling molecule PQS (2-heptyl-3-hydroxy-4-quinolone) stimulates OMV formation, apparently by inducing membrane curvature through interaction with the LPS.

Fig. 2. An EM of a thin section of Myxococcus xanthus OMVs close to the bacterial cell surface. Notice the links between the vesicles and the bacterial surface. Bar, 100 nm. Source.

The OMV story has been the subject of investigation by folks involved in varied aspects of microbial life. Physiologists would like to know how vesicles are made and what prods their formation; geneticists wonder about their participation in horizontal gene transfer; pathogenicity people look for their effects on host cells. Clearly, everyone would like to know the repertoire of molecules that are shuttled by OMVs. A considerable literature already exists, even a whole book dedicated to their activities. Recent review papers can be found here, here, and here. There’s even an International Society for Extracellular Vesicles (although it’s concerns are mainly eukaryotic).

Blebbing Benefits Both Us and Them 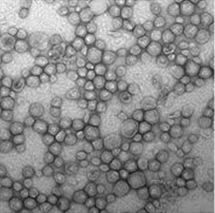 OMVs may be good or bad for the bacteria that make them. Take your pick: they absorb phages, bind complement and antibiotics, and they promote biofilm formation. Vesiculation allows the bacteria to get rid of antimicrobial compounds stuck in the OM or to discard misfolded OM proteins. And for the pathogens, OMVs can fuse with the lipid rafts on host cell membranes and thus deliver virulence factors directly into the host cytosol. OMVs are also formed in bacteria residing within their host tissues.

Because OMVs deliver immunogenic proteins, they have been prepared, sans their toxic LPS, for use in vaccines. Such vacuole-based 'acellular' vaccines tend to be quite stable and their cargo is protected from proteases and other destructive agents. These vaccines relieve many of the worries connected with the use of live vaccine strains, even if attenuated. All in all, it is not surprising that they have considerable appeal in the vaccine world. Some 60 million doses of vesicle-based anti-meningococcal vaccine have been administered since the 1970s and have proven to be at least 70% effective, although not against all strains.

What Are Meningococcal Vesicles Made Of?

Recent work, done with technical virtuosity, determined what proteins make up the OMVs produced by the meningococcus. For this, the authors used OMVs made without unduly stressing the cells and purified them by density centrifugation. Note that researchers use various stressing techniques to increase the quantity of vesicles. Different techniques yield OMVs differing in physical properties and composition. These disparate vesicles even have different names, e.g., SOMVs for spontaneous, DOMVs for detergent-treated, and NOMVs for chelation-induced “native” vesicles. Since not all OMVs are alike, care must be taken when comparing results from different labs. 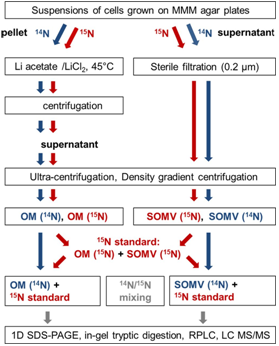 Fig. 4. Work flow of the proteome analysis. Outer membranes (OMs) were obtained with lithium chloride-lithium acetate at 45°C. Density gradient centrifugation of the SOMV and OM fractions reduced cytosolic protein contamination. A 15N-labeled standard was mixed with the unlabeled samples. Proteins were digested in gel and then subjected to reversed-phase LC (RPLC). LC-MS/MS was performed with high resolution and high mass accuracy. 1D = one dimensional. Source.

In this particular study, the researchers compared their meningococcal SOMVs to OM preparations from the same bacteria. They used an advanced mass spec analysis technique that relies on determining the ratios of the proteins found to internal standards identified for containing the heavy isotope 15N. It seems that mass spec data are not easy to quantitate; thus this special methodological wrinkle. Extending previous work done in various labs, the authors showed that the SOMVs comprised a selected subset of the cell's OM and periplasmic proteins. The SOMVs were enriched for 45 of the 61 proteins found in the OM and depleted for 9 of them. They contained 20 of the 28 known periplasmic proteins. Overall, about twice as many of the SOMV protein species came from the periplasm as from the OM. Unexpectedly, a number of cytosolic proteins were also found in the SOMVs, making up 30-40% of the total amount of proteins. Why the latter? As the authors point out, this is food for thought.

Among the abundant constituents of the OMVs, they found complement regulatory proteins, autotransporters, proteins involved in iron and zinc acquisition, and a two-partner secretion system. Some of these proteins are involved in meningococcal adhesion to host cells and biofilm formation, further food for thought. What was relatively depleted in the OMVs? For one, the highly abundant porins PorA and PorB. The proteins that connect the OM to the peptidoglycan layer or to the inner membrane (RmpM, PilQ, and MtrE) were also lacking, as were the three lytic transglycosylases (MltA, MltB, and Slt), enzymes thought to be involved in the reshuffling of peptidoglycan. Conclusion: the OMVs may form in areas of the OM that are less likely to be bound to the peptidoglycan layer, ergo less likely to be restrained from blebbing. 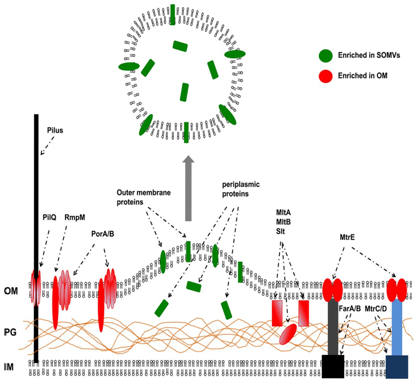 Fig. 5. Proposed model of SOMV release based on the proteomic approach. SOMVs are released from OM areas where proteins or protein complexes are underrepresented (red) or from areas with low lytic transglycosylase activity. These enzymes link the OM to the PG or the inner membrane. Therefore, proteins such as PorA, PorB, RmpM, PilQ, Slt, MltA, and MltB are underrepresented in SOMVs. Instead, SOMVs are enriched with other OM proteins such as complement inhibitory proteins and autotransporters (green). Source.

What Tells The Cells To Vesiculate?

That’s a good question. We don't know of a single mutation that totally abolishes OMV formation, although several genes affect it quantitatively. Growth conditions have an unpredictable effect. Blebbing is enhanced in some species by starvation, in others by rich media. Membrane stress via the σE pathway stimulates the process, as does the hyperaccumulation of periplasmic proteins in certain mutants. Since colonization of host tissues is stressful, it’s not surprising that OMVs are found in infected tissues.

Although this is not a novel story, I find it surprising, perhaps because I used to think that bacterial cells are pretty sturdy and therefore not likely to have malleable envelopes. Maybe I was fooled by the fact that the lipopolysaccharide of Gram-negatives is chemically tough, which, of course does not per se make it mechanically tough. Plasticity is demonstrated not only by the ability of the envelope to extrude but, under special circumstances, also to pinch off inwardly and form 'endocytic' vesicles.

Plasticity of the cell envelope is used by bacteria to manipulate the world around them. A membrane is more than just a barrier, it can be an active organelle. Here, it is a useful device used by bacteria to communicate with the cells of their host. As usual, nothing goes to waste in the world of microbes.

This work has been discussed in the podcast, This Week in Microbiology, episode #66.