A Whiff of Gastronomy

Ah, truffles! They are the gourmet’s celebration, the cook’s inspiration, the common man’s anticipation. And they demand quite a price, which at last count hovered around $2,000 a pound for Italian white truffles, the French black truffles being cheaper, but still not within the reach of most people. And their production is decreasing. So it befalls few mortals to dine on these delicacies. But there is hope. As many of you know, truffle oil is used quite widely in restaurants. So, where does truffle oil come from? Did it ever see a truffle? Before going there, let’s agree that the price is right. You can find all sorts of truffle oil on the Internet for as little as $5 per ounce. It even comes in a kosher variety.

Alas, truffle oil has not been within smelling distance of a real truffle but is simply some sort of regular vegetable oil, often olive oil, that has been doctored by the addition of the ether, 2,4 dithiapentane. This is one of the main odor-producing compounds in truffles and, to a debatable approximation, it emulates the real aroma. Many expert food connoisseurs disagree and maintain that it doesn’t resemble the real thing. Also, some are bothered by the artificial nature of this concoction. In defense of truffle oil, the flavor it imparts to food is quite impressive. It does remind me of the taste of the few truffles I have been lucky enough to eat—metallic, pungent, earthy, and very distinctive. It may not be the real thing but it does contribute a nice bite to otherwise uninspired dishes. I, for one, am on the side of the folks who enjoy it. The only allowance needed is to agree that even an imitation may taste good. 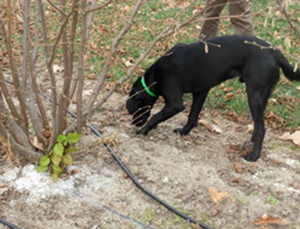 Truffles can be cultivated, but not without a lot of patience. The most common method consists of inoculating certain trees and waiting a few years for the fruit bodies (the truffles) to develop. Truffles can be smelled by dogs, but these must be trained, at the cost of using expensive truffles. I would think that truffle oil could be used as a much cheaper alternative for training purposes. Female pigs, on the other hand, have a natural affinity for the smell because it resembles that of a male sex attractant. They can find truffles that are one meter deep in the soil but, unlike dogs, do considerable damage to the soil by their rooting of the ground under the trees.

Now for a bit of science. The development of the truffle starts with the germination of spores to hyphae that then develop mycorrhizal connections with tree roots. This is followed by a sexual cycle that eventually results in the formation of the truffle itself (known to science as the ascocarp). Eventually, the interior of the truffle becomes populated with bacteria that are quite distinct from those in the soil nearby. The question arises, what role do the bacteria play in each step of differentiation? Earlier work suggests that these bacteria are able to fix nitrogen and possibly participate in the production of the characteristic truffle aroma. 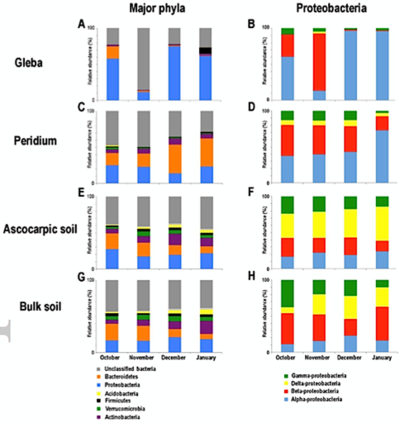 Fig. 4. Succession of the relative distribution of the major phyla (A, C, E, G) and proteobacteria classes (B, D, F, H) in the different compartments considered (gleba, peridium, (ascocarpic) soil adhering to the truffle, and bulk soil) during truffle maturation (from October 2010 to January 2011).

The authors of a recent paper used temperature gradient gel electrophoresis (TTGE) fingerprinting and 16S rRNA sequencing to determine the taxonomic identity of the bacteria present within and around some truffles growing under a hazel tree. The kind of bacteria present differed between the inside of the fruit body (the gleba), its surface (the peridium), the mycorrhizal layer, and the surrounding soil.

The bacterial population within the truffles and on their surface varied with time, some phyla increasing, others waning. They confirmed the sequencing data by examining sections from the surface and the interior of three mature truffles by hybridization with fluorescently-labeled oligonucleotide universal probes for 16S rRNA as sell as probes directed at certain phyla. Moreover, these bacteria carry many genes for the cycling of carbon, sulfur, and nitrogen, including the ones for nitrogenase. Accordingly, nitrogen-fixing rhizobia were found in abundance within the truffles.

The authors concluded that truffles provide a specialized niche for selected bacteria. So, what can be said about the role of bacteria in truffle formation? In the authors words: “Presence of bacteria in the ascocarps raises questions on their functional role in the life cycle of the fungus: are these bacterial communities selected by T. melanosporum due to their functional abilities to complement the fungus during its development? Or are they just profiteers taking advantage of the nutrients provided by the fungus?”  The answers would be on interest to truffle growers and therefore to truffle enthusiasts. Once again, will bacteria come to the rescue?