Some time ago, we asked this Talmudic Question: Can you think of a place on Earth where there is free water but no microbes? (A sterile flask of nutrient broth in a lab, the insides of the body, or an IV bag in a hospital don't count.) Someone answered that perhaps deep in Antarctica there would be a buried lake that was sterile. Not so. The early returns from the deep drilling of the buried Vostok Lake indicated the presence of microbes even there. But other sites in that continent come close to being just such an environment because their microbial population is unusually thin. So, let’s rephrase the question: “Can you think of natural places where there is free water but, comparatively speaking, few microbes?” (Pick your own limit, but <105 cells/ml seems thin to me.) 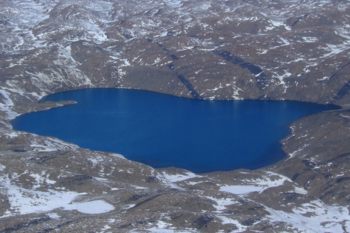 In answer, I point to Deep Lake, a most unusual environment in East Antarctica. Despite its low temperature, it never freezes. The reason? Its waters contain 27% salt (w/v, almost 5M of NaCl), just a tad below the salinity of the Dead Sea (33.7% w/v) and about ten times that of the oceans. That salinity keeps the lake liquid despite temperatures being as low as -40° C for the ambient air and -20° C throughout its depths. What stalwart microbes do you find here? Mainly, some unusual salt-loving Archaea, aka haloarchaea. They have been studied in some detail, with some unexpected findings. Four species make up about three quarters of the total population. They belong to a different genus each, all within the family Halobacteriaceae (the ‘-bacteriaceae’ being a holdover from older, “pre-archaeal” taxonomy). Like other haloarchaea, some of these isolates harbor two or three chromosomes, or replicons, totaling nine replicons among them. Each species has its own predilection for particular depths. They can be cultivated, as long as you have a lot of patience. One of them grows at temperatures from -1° C to 40° C, fastest at 33° C. When cultured in the laboratory at -1°C, the temperature of the top of the lake, the cells double six times per year. At that rate, the authors calculate that it would take 10 years for a single cell to fully populate the lake.

It bears emphasizing that Deep Lake among the least productive ecosystems known among natural bodies of water. How did it come into being? It became isolated from the ocean a scant 3500 years ago due to the continent of Antarctica rising. The Vestfold Hills, which is where Deep Lake is located, are dotted with lakes of various salinity, most frozen all year. These are interesting places, so hard to reach that getting samples is quite demanding. Surely the investigators who got there via helicopter were not about to go in for a swim. Too bad, as they would have floated easily.

Genomic analysis reveals that these four organisms vary in metabolic activities, which points to the likelihood that they reside in different habitats within the lake. They seem to be good at making biofilms, which suggests intriguing possibilities for their ecological predilections. Like other haloarchaea, the dominant species encodes the protein bacteriorhodopsin, thus possesses a mechanism for generating ATP from light energy. These also have genes for making gas vacuoles, a way to adjust their location in the water column by changing their buoyancy—useful as a way to navigate to the surface in the well-lit summer months. Genomics further suggests that this species has a carbohydrate-based metabolism whereas another one specializes in digesting proteins from available particulates and a third one utilizes amino acids. Considerable detail about their genomic makeup can be found in the paper.

Members of the haloarchaea living in milder climates are known to be good at swapping genes using various go-betweens (i.e., viruses, conjugative plasmids, transposons), as well as by forming heterodiploids. Likewise, the genomes of the Deep Lake strains reveal sequences derived from mobile elements including viruses, conjugative plasmids, and transposons, all of which are potential agents of horizontal gene transfer. Also, these strains studied here are especially rich in insertion sequences (IS), a characteristic that hints at high genomic flux. The authors propose that the cold and high salinity conditions in the lake resemble the cold CaCl2 treatment used for artificial transformation of, say, E. coli, which would explain the promiscuity of Deep Lake’s inhabitants.

This genomic survey of this haloarchaeal community suggests that significant genetic changes more likely occur via recombination than via mutation, which is food for evolutionary thought. Sympatric speciation, the formation of new species within the same environment, seems to be popular here (if that’s the word, considering the long time scale of events and the scantiness of the population). So here’s the paradox: How come these species did not homogenize, given their ability to exchange so much genetic material? One of the authors of the paper, Rick Cavicchioli, comments: It's intriguing that while gene exchange is rampant, species lineages appear to be maintained by virtue of each species having a high level of specialization, enabling niche partitioning and peaceful coexistence… They communicate, share, specialize, and coexist. In other words, they may well keep their identity because they occupy different niches. Still, how come they go only so far and no further in their gene swapping? Sounds like this is a great place to study barriers to evolution.

One last word, if I may. This paper contains an advanced analysis of metagenomic data. It is written in the language of evolutionary quantitation. I cannot take issue with this but would like to note that much of the article is somewhat inaccessible to ordinary biologists. Those younger than I should take note and ensure they get a suitable education in modern bioinformatics, as they no doubt will. However, a little assistance from the authors would have been appreciated.

This paper was discussed in the November 13, 2013 issue of the podcast This Week in Microbiology# 68.