There is much that should be remembered about those days of intensive exploratory work and much of it using very simple methods and instruments. There was a remarkable amount of sharing of current work and results without much concern for primacy, which was automatically recognized. Communication was often by hand written notes exchanged with people on a card by mail who were then or later notables (including Lederberg and Luria) with news or questions from the lab bench. There were relatively few workers in the early days and we knew each other and what was going on. Delbruck would send a post card with the penciled statement: "Phage meeting Aug. 14th". So here's a paragraph for you.

My work in the 50’s included cytology of phage infections and for a while it involved collaboration with Joe Bertani on lysogeny. So I visited him at work in Luria’s lab at University of Illinois. This was a lesson in lab activity of those days when experiments often took very long hours of multiple stages. I arrived by train late in the evening and was taken straight to the lab, which was humming with active phage experiments and overflow from the Gunsalus lab. Memory tells me that both Luria and Spiegelman were there with active work in hand. The rush halted intermittently for discussions and I gave a brief talk on my current work about 1:00 am. A short while after that the younger Lederberg arrived to START an experiment. It was exciting enough a time to keep me awake but I retired, tired, to get ready for the more formal but unusually informative and exciting visit to a remarkably distinguished lab.

Bob Murray is Professor Emeritus at the University of Western Ontario and past president of the ASM. He is known for his many contributions to our knowledge of microbial structure and taxonomy.

***** With our intention to share the flavor of the “Good Old Days,” we reprint a letter from Joshua Lederberg to Bob Murray. Note the many points he makes and his early use of the term ‘microbiota.’ - Elio.***** 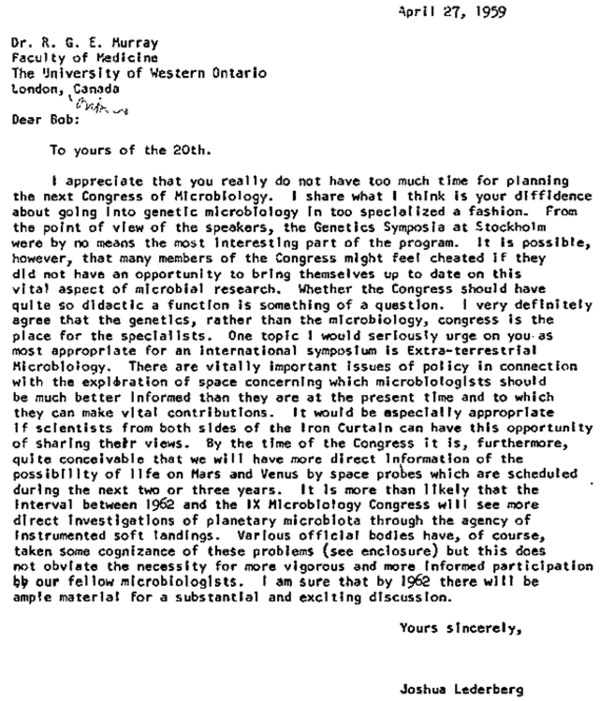