« A Whiff of Gastronomy | Main | Pictures Considered #10 : The Origin of Pulsed-Field Gel Electrophoresis »

Viruses are supposed to be small and simple—not even alive, just mobile genetic material after all. So what do we make of giant double-stranded DNA (dsDNA) viruses, one of which—the newly discovered Pandoravirus salinus—has an even larger genome than a hunky parasitic eukaryote called Encephalitozoon? The recent identification of P. salinus adds evidence to growing speculation that it and other mammoth viruses evolved from cellular ancestors and represent domains of life that likely existed on Earth before the last universal common ancestor (LUCA). Increasing numbers of scientists are coming around to this point of view; some of whom like Gustavo Caetano-Anollés at the University of Illinois at Urbana-Champaign go even further, asserting in Microbe magazine that “giant viruses not only existed at the same time as the LUCA of cellular life, they’re direct descendants of the lineage that gave rise to it.” Caetano-Anollés does not say this lightly—he has protein data to substantiate the claim. 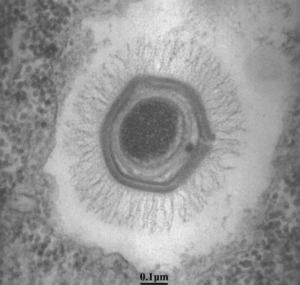 Fig. 1. EM section of a Mimivirus, Courtesy of Jean-Michel Claverie.

When they were initially spotted making life miserable for amoebas in a British water tower by Tim Rowbotham in 1993, the first-reported giant viruses were thought to be (yawn) bacteria and largely ignored. New-generation sequencing a decade later revealed their viral nature and because they’re as big as small cocci and stain Gram-positive the identifying scientists Didier Raoult, Jean-Michel Claverie and colleagues at Aix-Marseille Université in France named them “Mimiviruses” for “Mimicking Microbes.”

Mining the Global Ocean Sampling database searching for more giant viruses hinted that Mimiviruses had an extended seafaring family. However, the predicted marine relatives of Mimivirus remained elusive until 2010 when the Cafeteria roenbergenis virus, CroV for short, was discovered infecting the flagellate grazer Cafeteria roenbergenis. Then Megavirus chilensis was isolated from near-shore sediment off the coast of Chile and it, like Mimivirus, happily preys on several species of Acanthamoeba in the laboratory. Which eukaryotes M. Chilensis terrorize in the wild are still unknown.

This year a scientific team led by Claverie and Corina Brussaard at the University of Amsterdam in the Netherlands discovered a third giant marine virus infecting the common unicellular algae Phaeocystis globosa and called it Phaeocystis globosa virus, or PgV-16T. “Genome analysis of PgV shows it’s a bona fide relative of Mimiviruses thereby extending the realm of giant viruses to those that prey on an abundant blooming phytoplankton species,” says Claverie. “It might have a smaller genome than its relatives,” he adds, “but PgV has the family’s most intriguing feature, an associated virophage.”

In other words, PgV-16T is a virus infected by another virus, something unheard of before a “sickly” mammoth Mimivirus called “Mamavirus” was diagnosed with “Sputniks” in 2008. “If the tiny viral parasite we named Sputnik (after ‘traveling companion’ in Russian) can pirate the factory of another virus to propagate at the expense of its host, it’s a ‘virophage’—an infecting agent functionally analogous to a bacteriophage,” argue Claverie and Bernard La Scola, his colleague at Aix-Marseille Université. “Moreover, the fact that a virus can get sick makes it more alive,” they say.

That Sputnik is really a virophage was originally disputed because it’s so similar to satellite viruses. However, virophages possess unique features with an “uncanny resemblance” to viruses infecting cellular hosts including the accumulation of hordes of virophage particles within a single giant virus capsid. Thus, these tiny giant virus-infecting parasites seem more like phages than a special case of satellite viruses, according to Eugene Koonin at the National Institutes of Health (NIH) in Bethesda, Maryland

The existence of many genes found only in the Mimiviridae as well as an associated virophage convinced Claverie, Brussaard and their collaborators that Pgv-16T shares a common ancestry with Mimivirus, Megavirus and CroV, until very recently the largest known double-stranded DNA (dsDNA) viruses on the planet—a group that already has a known host range encompassing the earliest diverging branches of the domain Eukarya.

In their quest for giant viruses Claverie, Chantal Abergel and their collaborators at Aix-Marseille Université and the Université Joseph Fourier in Grenoble gather samples of sediment and pond water wherever they travel. Most recently, sediment from the mouth of the Tunquen River along the coast of Chileyielded the largest giant virus ever found; Pandoravirus salinus or “salty” that, like Mimiviruses, replicates inside amoebas. Then a second amoeba-infecting Pandoravirus, Pandoravirus dulcis, or “sweetie” was recovered from a fresh water pond near Melbourne, Australia. “The fact that two Pandoraviruses were discovered hunting amoebas so far away from one another means they aren’t artifacts. It also suggests they’re fairly common and widely distributed,” Claverie points out. 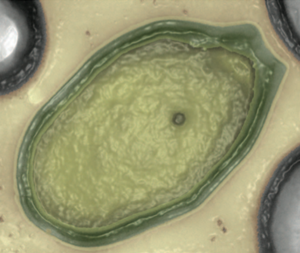 The group named these massive microbes “Pandoraviruses” because of their vessel-like, amphora shape and also because they expect the discovery “will unleash a torrent of questions about the origin of life on Earth and the role of viruses in the evolutionary process,” according to Claverie.Remarkably, the need to replicate in amoebas is one of the few things Pandoraviruses have in common with Mimiviruses and family. Not only are Pandoraviruses shaped differently, they have a much bigger genome and very different genes than the Mimiviridae. “In fact, more than 93% of P. salinus’ genes were nothing like anything we’d ever seen before,” Aix-Marseille Université team member Matthieu Legendre told Microbe magazine in October. Pandora viruses are also missing some key genes found in other giant viruses including those that encode DNA ligases and topoisomerases, “suggesting that in contrast to other known giant viruses, Pandoraviruses need an actively involved host nucleus to replicate,” according to Nadège Philippe, from Aix-Marseille Université.

Electron microscopy confirmed this, showing that P. salinus taken in by an Acanthamoeba fused to the victim’s phagosome membrane and then exploded, spilling viral proteins and DNA into its cytoplasm—some of which managed to get into the nucleus. Two to 4 hours later the nucleus began to decay and Pandoravirus particles stumbled out, completing their replication cycle free-floating in the cytoplasm.

Led by Abergel, these scientists are currently characterizing Pandoraviruses’ unknown genes and identifying the proteins they encode. This should help verify their belief that Pandoraviruses originated as independent cells before adopting a parasitic life style and losing the ability to replicate on their own. “Going from free-living to parasitic is a one-way street,” Claverie told an audience at the Rockefeller University in New York City on October 7th of this year—”Once that happens there’s no way back.” Meanwhile the team keeps searching for larger and larger viruses, because the bigger a virus is the closer it is to a cell they say. 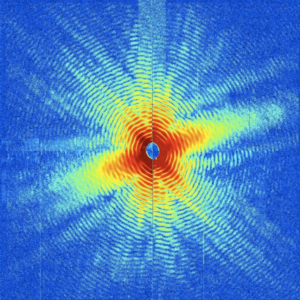 Phylogenetic analysis shows that giant viruses don’t “belong” within the three accepted cellular domains. “They definitely don’t want to cluster with archaea, bacteria or eukaryotes,” according to Claverie. This strongly supports the need for more than three branches on the Tree of Life.

“The discovery of dsDNA viruses with smaller genomes than Mimiviridae but sharing several features led us to believe there was a phylogenetic continuity among DNA viruses and we therefore concluded that giant viruses would all fit into a fourth domain,” Claverie explains. Indeed, there are so many similarities among the NucleoCytoplasmic Large DNA Viruses (NCLDVs) that some virologists want to lump them together in a new order called the “Megavirales” which would include six families of smaller viruses namely Poxviruses, Asfarviruses, Phycodnaviruses, Iridoviruses, Ascoviruses and Marseilleviruses in addition to Mimiviruses. Furthermore, evolutionary reconstructions show that the NCLDVs share a common ancient origin that has been traced back to a last common ancestor by Raoult, La Scola and their collaborators. However, whether or not the NCLDVs will be officially recognized as “Megavirales” by the International Committee on Taxonomy of Viruses (ICTV) had not as yet been decided at this writing.

No matter for Pandoraviruses which don’t cluster any closer to members of the proposed Megavirales than they do to the three acknowledged domains and this indicates that they evolved from an entirely different cellular lineage, says Claverie. Thus Mimiviruses and family might have emerged from a fourth cellular domain, Pandoraviruses from a fifth and as more giant viruses are discovered even more domains might have to be added.

That’s if the concept of domains survives the recent onslaught of massive microbial sequencing revealing a pervasive horizontal gene transfer largely mediated by viruses. The fluid nature of microbial genomes calls for “a radical revision (if not abandonment) of the Tree of Life concept,” according to Koonin. This might be controversial, but what is not is that their diversity and abundance makes viruses “the dominant biological entities on earth,” he says, insisting that “Mimiviruses, despite all their complexity remain typical viruses rather than remnants of a vanished fourth domain of cellular life.”

Curtis Suttle at the University of British Columbia in Vancouver agrees that a major revision of the Tree of Life is needed and told Elizabeth Pennisi in the 19 July issue of Science that the identification of Mimiviruses and Pandoraviruses “make it increasingly clear that the concept of ‘domains’ is an archaic concept that keeps viruses from the rightful place at the table where the story of evolution is told.” (Suttle and Matthias Fischer, now at the Max Planck Institute in Heidelberg, are the discoverers of CroV and Mavirus, its virophage.)

A meeting on the Giant Viruses will take place in Tegersee, Germany, November 17-20, 2013. This meeting will be discussed by Vincent Racaniello and colleagues in the podcast This Week in Virology.

Editors’ Note: This is the sixth in an ongoing series about cells and processes that might not come immediately to mind when you think “microbe.” The first five in our “Oddly Microbial” series can be linked here—Ribocytes; Cancer cells; 86-Million Year-Old Deep Seabed Mystery Cells; Prions; and Programmed Cell Death.