Radiation Ahead? Eat a Black Mushroom!

Week of the Fungi on STC is a sporadic undertaking. This occasional festival is our way to hail the fall mushroom collecting season in parts of the northern hemisphere. We are a bit late this year, but mushroom collecting is still possible in many parts.

Suppose that one day you have the misfortune to receive a strong dose of radiation in preparation for a medical procedure, say a bone marrow transplant. To your surprise, the physician prescribes that you eat a hefty serving of dark-colored mushrooms about an hour beforehand. Lest you think this black magic, the clinician explains that this has been proven effective in 'clinical trials' in mice, surprisingly so in fact. A 2012 paper with the forbidding title Compton Scattering by Internal Shields Based on Melanin-Containing Mushrooms Provides Protection of Gastrointestinal Tract from Ionizing Radiation describes this work. The authors fed mice a mushroom used in East Asian cuisine, called Judas’ ear, tree, or jelly ear (Auricularia auricula-judae) an hour before giving them a powerful 9 Gy dose with the beta emitter Cesium137. For perspective, anything over ~0.1 Gy is considered a dangerously high dose for humans. All the control mice died in 13 days while ~90% of the mushroom-fed ones survived. Mice fed a white mushroom (porcini) died almost as fast as the controls, but those fed white mushrooms supplemented with melanin also survived.

And herein lies the story. Melanin, the pigment found in the human skin among other sites, reduces potential damage caused by ionizing radiation. This is due to Compton scattering, a phenomenon well understood by physicists. Rather than try to explain it, let me quote: The radioprotective effects of melanin are based on the controlled dissipation of Compton electron energy by melanin, which results in a decreased number of interactions between Compton electrons and cellular milieu and the scavenging of free reactive radicals by melanin. For most of us, it’s enough to know that this process can dissipate radiation and thus reduce its effects on living things.

It has been known that some fungi, black molds and black yeasts in particular, are highly resistant to radiation—witness the black walls of the entombed chamber of the “hot” Chernobyl reactor, which is due to their abundant presence. We discussed this before (here and here), somewhat in awe of these fungi that not only are resistant to a powerful lot of radiation but are even drawn towards it (“radiotropism”). And that’s not all. Believe it or not, they can use the radiation as an energy source for their growth. If you find this hard to swallow, think of this as analogous to photosynthesis, but in this case the energy-harvesting pigment is melanin.

Melanin is perhaps not the only cell component involved in these reactions to radiation. While one study reported increased growth by melanized strains compared with “albino” unpigmentedmutants, another one found only a small difference between the two. But since irradiation of the black yeast Wangiella dermatitidis prompts differential expression of upwards of 3000 genes, there is ample room for other factors to play a role here. I’ll discuss this further in the future; for now, let me return to the mushrooms and the irradiated mice.

Melanin, which is widespread among the fungi, including many edible mushrooms, has earlier been associated with radioprotection. It is also quite insoluble and fairly indigestible, thus likely to remain undisturbed in the GI tract for some time after consumption. So, in retrospect, it seems almost obvious that feeding melanin-containing mushrooms to mice would render them radiation resistant—but I would not have thought of it. To test this in vivo, off went these investigators to the nearest Trader Joe's store where they bought a supply of both darkly pigmented and white mushrooms. A. auricula-judae was a good choice for the pigmented sample because it contains about 10% melanin by weight. While antioxidants might also be suspected to play a protective role, the amount of antioxidants was about the same in A. auricula-judae as in the white control, porcini mushrooms.

The authors determined the residence time of the fed mushrooms in the stomach and intestines. Since the intestines are especially radiosensitive, they chose for irradiation the time when the mushroom food accumulated there, which was one hour post feeding. They fed the mice intragastrically 1 g of ground-up mushrooms per kg body weight, an amount comparable to 2-3 ounces of mushrooms for one of us—hardly a huge amount. Some of the mice were fed melanin-containing mushrooms, some white mushrooms, and some white mushrooms supplemented with an equivalent amount of synthetic melanin (100mg/kg). Survival after irradiation in the two groups of melanin-fed mice was striking. Moreover, these mice showed no intestinal damage nor any signs of apoptosis of intestinal cells. Their bone marrow, not shielded by the mushrooms, was transiently affected. All of this points to the protection being due to the melanin.

On The Hospital Menu Someday? 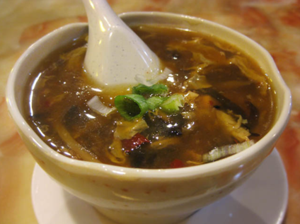 Do these results with the melanin-fed mice suggest using melanin-containing fungi to prevent radiation damage in humans? These studies are certainly encouraging, although it may not be easy to carry out the necessary clinical trials in humans. But keeping in mind the low cost, apparent efficiency, and appetizing nature of this procedure, one can only hope that it will be pursued further. A. auricula-judae grows commonly on trees in the temperate zone (including in North America) and is cultivated on a large scale in parts of Asia and Africa for both food and purported medical value. Among its virtues, this mushroom is an important ingredient of Chinese hot and sour soup (for a good recipe, click here). It isn’t overly tasty but it contributes a nice crunchy consistency to the dish. Porcini are another story. They may not be radioprotective, but they are among the very tastiest of wild mushrooms. Each has its place. Indeed, in the future mushrooms may have a place in the hospital kitchen. Who would have thought that some day, taking your medicine could be a culinary treat?

This story was discussed in the podcast This Week in Microbiology #67.

I agree that the research on the radiation protection properties of melanin and the ability of microorganisms to actually grow better in the presence of radiation is just incredibly interesting. There is one aspect of the work that has been overlooked. Melanin bleaches. The very intense oxidizing conditions produced by ionizing radiation could play havoc on melanogenic fungi. One question I had was, why aren’t fungi that are exposed to long-term radiation bleach-blondes? Recently I had the pleasure to work with Kate Dadachova and Arturo Casadevall to explore this question. We showed that melanin has a self-healing property when exposed to an electrical potential (Bioelectrochemistry. 82:69-73.). In other words, the radiation can oxidize the melanin and the fungi may in turn counter that by reducing the melanin, possibly through electron transfer. Since, melanin pigments could serve as terminal electron acceptors for growth in microorganisms (Appl. Environ. Microbiol. 68:2436–2444.), it may be that fungi grow better in radiation fields by using melanin as a “bottomless pit” for electrons.