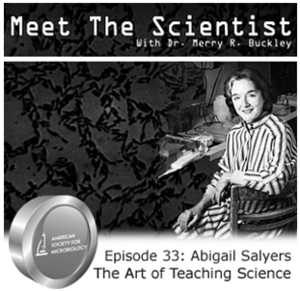 Prof. Salyers’ contributions to microbiology as well as the quality of her teaching are widely known and much admired. Her lab provided important tools for the genetic dissection of Bacteriodes and its metabolism of complex carbohydrates. More broadly, she pointed to the importance of the human microbiome well before it became a common concern and made important contributions to the study of the microbiome of germ free mice. She was responsible for efforts to educate the public about the impact of antibiotic abuse and resistance.

Abigail’s most noteworthy characteristic may well have been her singular clarity of thought. She perceived problems of current day microbiology and infectious diseases in terms that were both wide-reaching and specific, simple sounding yet profound, complex but understandable. She had an uncanny ability to zero in on fundamentals and to explain them with assured logic. And, most notably, her vision encompassed the full scope of the microbial world. In recognition of her contributions, she received many awards, among them the 2009 ASM National Graduate Teacher Award in Microbiology. She served with distinction as ASM President in 2001-2002. The anthrax scare happened during her tenure, which led her to work hard to educate both microbiologists and the public to realistically assess the threat of bioterrorism.

For a sampling of her ability to articulate the importance of microbes to people and her thoughts about teaching, listen to this rare interview with Merry Buckley. Her open honesty and passion for science shines through in her replies to Merry's queries.

For a more detailed and eloquent eulogy by Mark Martin, click here.