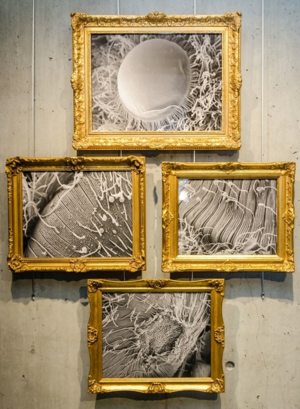 Getting the message out to the public that the microbial world is about much more than just diseases is a challenging topic, but one we should keep trying to improve on. There are many ways to do this, but as the saying goes, a picture is worth a thousand words, and most people don’t want to read a thousand words anyway. When the University of British Columbia’s Beaty Biodiversity Museum suggested that we stage an art show based on protists, the three of us gladly took on the challenge.

This actually all started several years ago when we moved into a new building at UBC in Vancouver. The walls were a strikingly deep red colour that reminded one more of an art gallery than a lab. Indeed, the colour seemed to beg to be paired with giant, ornate, even gaudy gold picture frames. As a joke, we commissioned a copy of Gustav Klimt’s “The Tree of Life”, which seemed appropriate for the lab, and framed it in a hand-me-down frame that we spray painted gold. This got the ball rolling, and we soon hatched the idea to cover the red walls in the lab and down the hall with a ‘gallery’ of gold-framed SEM pictures of beautiful protists. The idea here is that one would have the context of an art gallery show, but the content would be all wrong, and the effect is strangely unsettling. Many months of dumpster-diving and op-shop hunting later, we had a long row of large and ornately framed pictures, primarily of new species of protists that we were describing or re-describing from the hindguts of termites and the cockroach Cryptocercus. These protists are typically very large, and particularly beautiful, showing off amazing examples of symbiotic interactions, symmetry, and structural complexity. But for the most part we aimed for visually arresting compositions—looking past the scientifically informative shots, we looked at extreme closeups of interesting textures or shapes, and framing shots to emphasize some pleasing contortion or depth of field effect. Some of the shots are obviously cells, but some are hard to recognise as such. 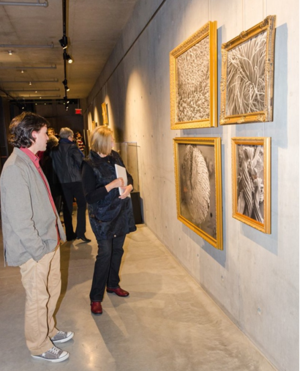 Our impromptu exhibit hung on our walls outside the lab for a couple of years, and it is nice to frequently see visitors to our building stopping in the hall to look at the pictures. Evidently, one of the museum designers liked the idea, so we began to plan for a formal exhibit in the public space of the museum: Invisible Portraits. While this began because of the framed portraits, Erick also creates forged and welded metal art based on protists and Patrick makes wooden protist-based jewelry, so the exhibit was expanded to include three different media—photos as well as metal and wood sculptures. We quickly set about improving our stock of picture frames, and were very lucky to meet Reiner Lessmann, a professional framer, an artist really, who was retiring after decades of making and restoring frames. Reiner was closing down his workshop and through his generosity we were able to buy a quantity of huge frames to match the Victorian style we were looking for (some are still in his shop because they were too big for our cars!). The museum installed fantastic cases for the sculptures and hung the frames in clusters, for each of which we also chose quotes from the original manuscripts in which Old Masters such as Cleveland, Kirby, Kofoid, Darwin, and van Leeuwenhoek described how they saw these organisms long ago. In September the museum staged a sold-out formal opening that was a great success, and the exhibit is scheduled to run until January 2014. The museum has 2,500 visitors each month, so we hope that at least some of the estimated 10,000 people who can now see this work will come away with a greater appreciation for the intricate beauty of the microbial world.

Patrick and Eric are at the Canadian Institute for Advanced Reserach, Botnany Department, University of British Columbia, and Kevin is at the Biological Sciences Department, California State University at Pomona. 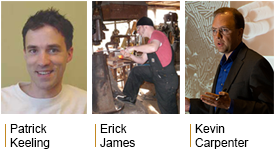 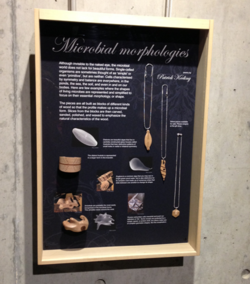 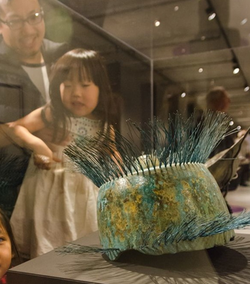